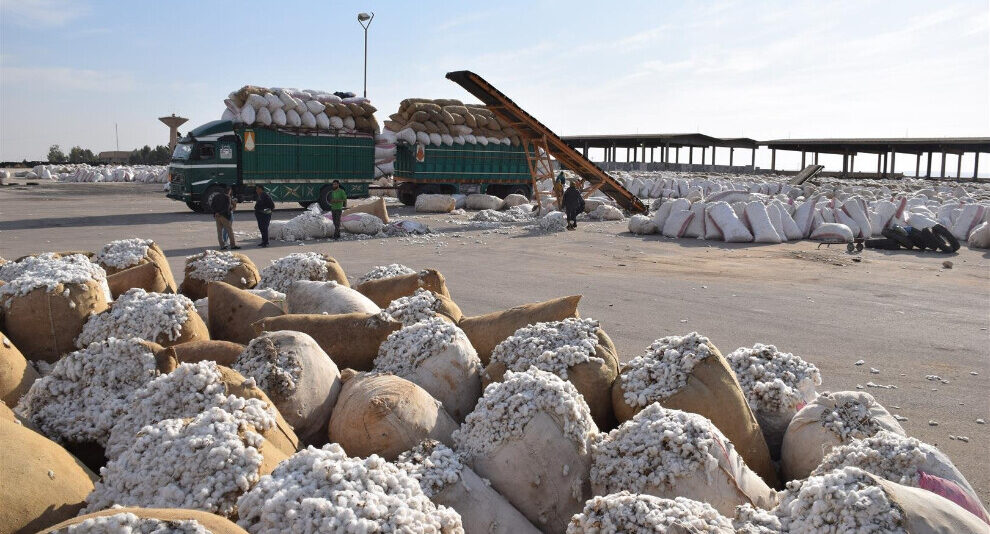 Cotton is one of the leading agricultural products in North and East Syria, and a large number of farmers in the region earn their living from cotton production, which thus provides employment for thousands of citizens. However, the cotton plantation rate has been decreasing in North-East Syria year by year. Reduction of the water rate in the Euphrates Region adversely affected cotton production.

According to the Economy and Agriculture Committee, the rate of cotton plantations decreased to 30,000 hectares from 37,000 last year.

After the dry season in the Jazira region, wheat and barley harvests could not achieve the expected results. Unfortunately, the farmers in the region have allocated a great budget for cotton production.

In North and East Syria, multiple factors have adversely affected the cotton harvest. Yet, the most effective factor is the invading Turkish state’s reduction of the Euphrates River’s water. The cotton is known for needing water 12 times a season to accomplish a successful harvest.

Many farmers stated that the reduction of Euphrates water, as well as the increasing prices of the fertilizer, have rendered production unsustainable.

Speaking to ANHA, farmer İbrahim Hesen expressed that the cotton harvest could not reach the expected rate of product in Raqqa due to shortage of water. He stressed that cotton production has greatly decreased due to the outage of water and high cost of fertilizer, while each farmer used to produce 200 kg of cotton every year.

Farmer Eli El-İsa noted that rising temperatures have also affected the harvest season and indicated a decrease in production at the rate of 80 percent.

Speaking on the cotton price which was determined by the North and East Syria Economy and Agriculture Committee, Eli El-İsa said, “This year, we have obtained a low amount of product. A dunam [decare] of field provides only 200 kilograms of product. To pay the cost of harvest, purchase prices should be higher.”

The Economy and Agriculture committee announced that the cotton would be purchased for 950,000 Syrian Liras, depending on the quality of the product. On the other hand, the Committee will reportedly purchase cotton from all farmers.

The Committee has distributed over 20 tons of seeds to the farmers in North-East Syria, selling one-kilogram seed in exchange for 1,200 Syrian Liras.

Selman Barudo, co-chair of the North and East Syrian Economy and Agriculture Committee, stated that many kinds of agricultural products grow in the region, and cotton is the second leading product.

In Raqqa, having the highest rate of cotton harvest, they contracted with 35 carders, said Selman Barudo, and added that preparations have been completed in all regions.

The North and East Syrian Economy and Agriculture Committee arranged two centers in Deir ez-Zor and Heseke, and two in Raqqa (Shinine and Kibish centers).

Selman Barudo expressed that they would support oil factories in the Jazira region, saying, “We will give cotton seeds to be degreased to the factories. Also, the remains of cotton will be used as animal feed.”

“We always support agriculture in North and East Syria. But, the embargo imposed on the region and the water war waged by the invading Turkish state in the region adversely affected agricultural production” said Selman Barudo, and noted that they would continue to support farmers.