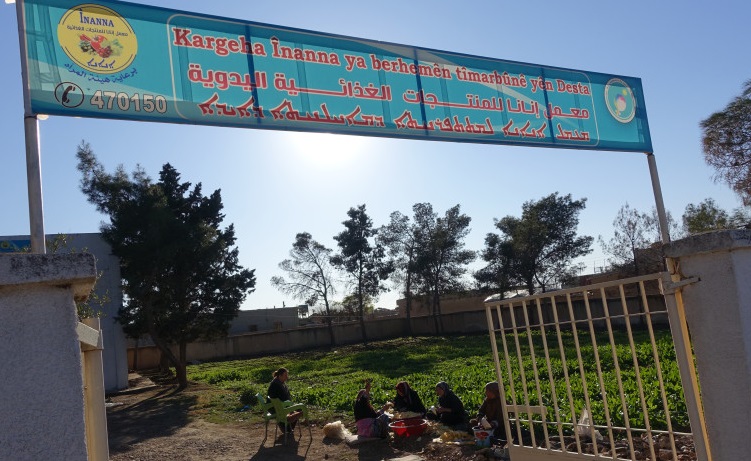 Economy in Western Kurdistan (Rojava) has been exposed to plunder and exploitation on a large scale by the Syrian state, which controlled the country’s entire resources, rendering the community powerless. This policy was not only economic, but also social as well and led to the division of society in Rojava, which has always had a tremendous community spirit and culture. Accordingly, the culture of participation, teamwork and mutual confidence has declined in the past 10 years. Rojava is still a war zone and under siege, making its market outside the society’s control. There is a lot of political, societal, economic and infrastructure destruction in Rojava. In addition, the migration of capital and humans has further aggravated the situation. Therefore, the revolution and the society of Rojava are struggling economically.

A condition and a situation like this necessitates the development of social economy urgently through developing local communes and co-operatives. Although there are a lot of challenges, the most important thing is the individual and the culture of community. On this basis, during the early stages of the revolution, some of the economic events were conducted expeditiously. Priority was given to projects dealing with agriculture and infrastructure. Some co-ops were established in the past three years. The development of those co-operatives has boosted the confidence of our citizens in building a contemporary and advanced society. It has proven to be an important experiment. Now we have to move to a new stage, which in turn requires reorganising society.

Our immediate goal is to build more independent and local communes and co-ops. Soil, water and energy are our priorities. We have to approach those projects in a more communal way. Many practical steps have been taken in this area and work is still in progress.

Co-operatives have been established in 9 different areas in Al Jazeera [Jazira / Cizire] Province. Each co-operative has its own administration. Those co-ops are as follows: 12 general co-ops and 6 independent women co-operatives. There are 6,315 members of those co-ops. They own shares between SYP 10,000 to SYP 25,000. The income of those co-ops are shared between communes treasury and members. Shares also change according to work, but the focus is always on economic development.

Through those co-operatives, 328,270 acres of farmland have been planted.

There are 162 members of those co-op societies. Therefore, a new village for the co-operative.

Greenhouse co-operatives for the cultivation of vegetables are placed on ten acres and 13 vegetables hangers have been built. There are 140 members of those co-ops and the membership is increasing steadily. Each share is at the price of SYP 25,000.

A. Basic Principles and Standards

The construction process is based on the democratic, independent, participatory and communal economy. All Economic activities are designed to encourage and develop the participatory and collective life of communes. The life, work and management of co-operatives are based on the principle of liberty and equality. Women, therefore, play an important role. The culture in those communes are based on the principles of democracy, human values, self-sufficiency and gender and social equality.

Members of the management are also workers in co-ops, which means that everybody actively participate in the running of the co-op. There is no difference between a manager and a worker.

Only one person from a family can take a management position. For example, if a person from a family is in the management team of a commune or a co-op, another person from the same family cannot take a different management position. In addition, there is a difference between the management and financial authorities and an individual cannot join both authorities. Members of authorities are democratically elected for 1 year. The rule of (60%) of votes applies when making decisions, which have to be formally documented. Minutes of meetings have to be written down and published periodically. An emergency meeting can be convened if its outcome has direct effect on members (one-third of members have to attend the emergency meeting).

All members of a co-op are also members of the General Authority, which meets periodically and evaluate the work of the co-op, organises its activities, makes decision and allocates tasks to members.

Tasks and responsibilities, and the mechanism of their implementation, are decided by the General Authority of the co-op.

The Management Authority is composed of at least 3 members of the General Authority.

6. Co-ordinating Authority of the Co-operative

Co-ordination takes place via monthly and periodic meetings between members of the Management and Financial authorities and the Co-ordinating Authority, with the presence of another three people. In those meetings, policies are set to develop co-op and collective work between various units and authorities. Decisions are also made and a three-monthly report is sent to the General Authority.

Membership is based on the number of shares, the responsibilities within the co-operative and the capital involved.

A minimum share is 1 and maximum 5. People who do not own a capital can also join the co-operative by borrowing from the General Fund of the Co-op, as a loan, which is paid in instalments in accordance with the rules and regulations of the co-op.

An active member is the person who joins the co-op and work for it.

A capital member is the person who only joins the co-op by their wealth and capital.

Each co-op has its own “General Fund.” The Fund is responsible for the co-ops’ incomes and expenditure, which is documented daily in the accounting book.

Every month or year or following the completion of a project, The Financial Management Authority submits its financial report to the General Authority.

Net profit is divided based on three principles:

– a proportion is allocated for the future needs, work, activities and projects of the co-op.

– a proportion is equally divided among members according to their needs and the work and efforts they have done for the commune.

– a final proportion is allocated for the provision of the need of the co-op and the commune, such as health, education, electricity, water, roads maintenance, etc. In addition, some of this proportion is also saved to spend on the severally ill people.

A financial committee can monitor and audit the account book.

Co-op expenses must be documented, receipts must be kept and 2 members must approve any transactions or reimbursements.

At the end of the financial year, profit is divided as follows:

– 50% is divided between shareholders.

– 20% is deposited in the commune’s fund in order to fulfil the need of society.

Each member of the commune receives a monthly salary and their share of the profit after the end of the financial year or upon the completion of a major project.

Members who has physically worked for the co-op and has contributed financially also receives the highest share of the profit.

In a co-op, privilege is given to members who work actively in the co-op. Members who are highly qualified and active are welcomed, but the co-op can hire individuals from outside, if necessary, between 6 months and 1 year. Eventually, those individuals become permanent members of the [co-operative].

A co-op that is making a financial loss in a single year, the General Council (a meeting of the co-op members) has the right to change the management and replace it with a new team. Also, members of the Financial and Management authorities could be reshuffled during that period.

If it made more losses in the second year, the Council could decide to close the co-op down.

Members of the Financial and Management authorities in a losing co-op, are not entitled titled to run for any office for the entire financial year. They, however, can run for an office in the following year, once their candidacy has been approved by the General Council.

Within 5 years, if the co-op fail to make any profit and make losses in 2 years within the same period, members of the Financial and Management authorities are prohibited from holding an official position for the next 10 years. If those members decide to join another co-op and did not succeed in making profit, the same members are banned from holding any position for the next 10 years.

The General Council and all other authorities convene periodical and emergency meetings, during which important decisions are taken in those meetings. The General Council of the co-op meets once every 3 months. Plans and future projects are examined and discussed for the entire financial year.

Other co-op authorities organise their meetings according to their work schedule. However, they must meet once a month and submit their reports to the Co-ordinating Authority of the co-op, which in turn meets once every month.

Each authority must write their reports and minutes of their meeting and document/archive them accordingly.

Plans and projects must be designed and implemented in accordance with the health and safety procedures. Work place hygiene and safety are very important during and outside working hours. All necessary measures and equipment (first aid kit, local doctor, etc) must be in place in case of emergency.

I. Penalties and Sanctions

The penal system of the co-op or the commune is derived from the justice system of the Movement for a Democratic Society (TEV DEM) – based on social justice.

Rules of Procedure of Agricultural Co-operatives