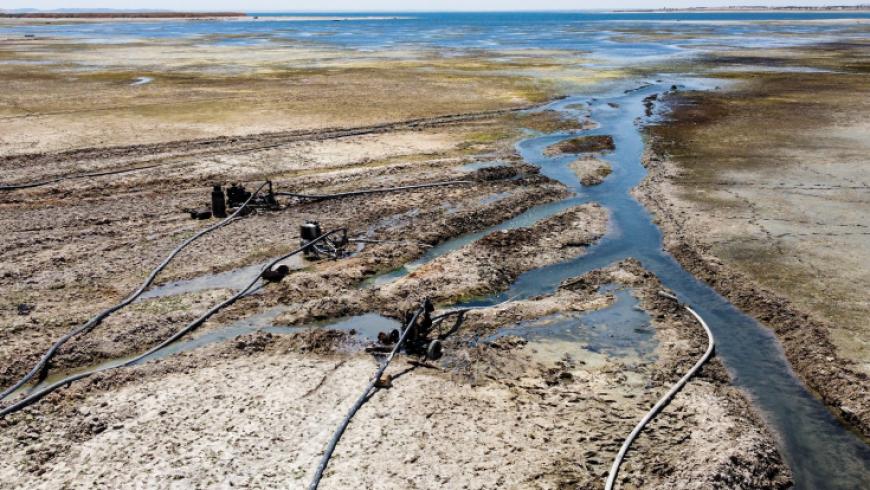 QAMISHLI, Syria (North Press) – Syria in 2021 witnessed its lowest level of wheat production in 50 years, according to a recent report by the United Nations’ Food and Agriculture Organization (FAO).

This coincided with a warning issued by the United Nations Office for the Coordination of Humanitarian Affairs (OCHA), which it stated that Syria was suffering from the worst drought in 70 years during the summer.

The decline in agriculture production comes as war-torn Syria suffers from famine-like conditions in parts of the country with over 90% of the population living in poverty and more than 12.4 million people labeled as “food insecure” by the FAO.

Agriculture in Syria accounted for 17.6% of the gross domestic product (GDP) in Syria, according to 2010 estimates.

About 17% of the total workforce, or nearly 900,000 workers, worked in the agricultural sector.

Agriculture in Syria was the primary economic activity in Syria, as agricultural exports contributed an important share to foreign trade and the provision of foreign exchange.

It also provides a lot of raw materials for other various economic and industrial sectors.

Previously, the agricultural sector ranked second after oil in terms of export revenues in the balance of Syrian exports.

Syria used to produce many agricultural products such as grains, legumes, fruits, vegetables, field products, cotton, olives, pistachios and many others.

In another report published by FAO on December 16, it seems that Syria is part of a larger problem, namely food insecurity in the Middle East.

About a third of the population in the Middle East is living in a state of food insecurity, in tandem with a rise in the level of hunger, which has reached 91.1% during the last two decades, the report said.

Victor Nylund, representative of the United Nations Children’s Fund in Syria (UNICEF), warned of the serious repercussions of this crisis.

“The insufficient flow of water from the Euphrates has a direct impact on the daily lives of millions of people,” Nylund said.

“We urgently need a conversation at the regional level to find a solution as soon as possible,” he stressed.

The lack of water is having serious consequences for more than just agriculture. According to UNICEF, poor water quality is leading to significantly more cases diseases such as diarrhea, especially among children. Low water levels also threaten the power supply. Around three million people in northeastern Syria get their electricity primarily from three hydroelectric power plants on the Euphrates River.

In Hasakah governorate, which was considered the food basket of Syria, the water crisis has become more severe.

The water crisis is even worse in the Hasakah region, which was in the past called the “breadbasket of Syria.”

It once produced around half of the country’s grain. Today, the reservoirs  have shrunk to large puddles where young men catch fish with their bare hands.

The city’s river, the Khabur, which is supposed to supply drinking water, has dried up due to the lack of rain.

All that remains for the people of Hasakah at the moment is the Alouk water pumping station near the Turkish border, which supply more than 460,000 people. However, this source is under threat, as for the last two years the waterworks, it has only functioned intermittently because Turkey has cut off the water.

“The persistent interruptions of essential services to civilians in Syria are increasing. Ongoing disruptions to the critical Alouk water station in northeast Syria must stop,” UNICEF said last July.

The people in Hasakah now get their drinking water from large water tanks that are brought into the city on trucks. But the water is expensive: 1,000 liters cost around 6,000 Syrian pound (SYP) or about 2 euros ($2.25) — a lot of money in a region where the average salary is the equivalent of just €53 a month.

The population in the northern and northeastern regions of Syria is still unable to have healthy and safe access to an adequate supply of potable water, due to environmental reasons due to conditions imposed by the long conflict, a UN report said in October.

According to the United Nations action plan on September 9 to address the water crisis, 5.5 million Syrians are in need of vital water supplies after the levels of the Euphrates River has decreased since last January.

The lack of water flowing into the river from the source in Turkey, in addition to the lack of rain and the high average temperatures have led to the creation of drought-like conditions in northeastern Syria, the UN report said.

Syria currently ranks seventh on a global risk index of 191 countries most at risk of a humanitarian or natural disaster event that could overwhelm response capacity, in part due to the ongoing crisis which hinders adequate preparedness measures.

The drought, according to humanitarian organizations, has affected large agricultural areas that mainly depend on rainwater in a country where 60% of the population suffers from food insecurity.