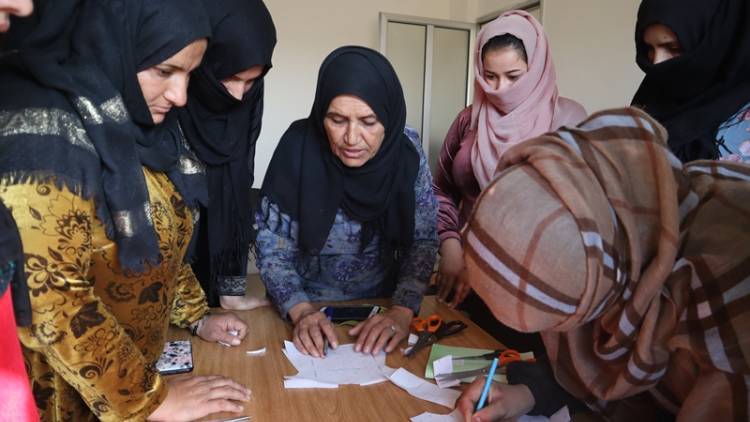 Syrian Free Women’s Foundation has taken important steps for women in every part of life, from health to economy, since its foundation. Ruken Xiso, the director of the foundation, said that they will develop more projects in 2022 to provide both moral and material support for women.

[The] Syrian Free Women’s Foundation was founded in 2014 in NE Syria. The aim of the foundation is to develop women in economic, cultural, social, and health areas. It also aims to develop relations with foreign women’s organizations and institutions to draw attention to the problems faced by women in Syria and the Middle East. The administration and members of the foundation have carried out their activities with the motto, “Free Women are the Foundation of a Free Society”.

They have developed dozens of projects until now

The foundation has developed dozens of projects to increase women’s participation in the cultural, health, and social areas and built a permanent cultural revolution for women and children. As a result of the efforts, many health centers, kindergartens, and orphanages, women’s shops, music institutes have been opened. It has also organized training programs with the participation of thousands of women in refugee camps, provinces, districts and villages of NE Syria. The aim of the Syrian Free Women’s Foundation is to liberate women from the roles and social backwardness imposed on them. Ruken Xiso, the director of the foundation, spoke to NuJINHA about the works of the foundation.

They keep working for women

Stating that the foundation was founded by five women, Ruken Xiso said, “At the beginning, a questionnaire was prepared and more than 300 women filled out the questionnaire. We wanted to learn the thoughts of women to start projects for them. At that time, there were violent attacks on our regions. Our main aim was to start working as soon as possible. Before starting our projects, we provided health and protection training programs for women so that they could protect themselves from diseases and help sick people around them. We also organized ideological seminars on women’s reality.” Stating that the foundation formed committees and opened offices in cities, districts, and regions of NE Syria, Ruken Xişo said that they have kept actively working in liberated areas.

[The] Health Committee is one of the committees of the foundation. The main aim of the committee is to organize health training to give necessary information about how women can treat diseases and heal injured people. The committee has held many seminars to raise awareness of women about gynecological diseases, particularly about breast cancer. After the Covid-19 outbreak, the committee has carried out awareness-raising activities. “We still carry out our activities to raise awareness of the public about the Covid-19 pandemic. We also have pharmacies selling natural medicines in Dirbesiyê and Hesekê. We plan to open such pharmacies in Qamishlo and Dêrik,” Ruken Xişo told [Jinha].

They work for the education of children

The Education Committee is another committee of the foundation. Stating that the Education Committee has worked to provide theoretical and practical education, Ruken Xişo said that the committee organizes courses for both women and men to change the mentality of society. “The committee has also worked for the education of children. We have opened kindergartens in many cities. We opened a children’s house called Keskesor Children’s House for children, who lost their parents in the war. The foundation meets all needs of the children living in the children’s house.”

Indicating that the Project Committee develops projects according to the needs of the people, Ruken Xişo said, “We have a tailoring workshop. We organize training courses such as tailoring, hairdressing, and language courses. Our projects in Roj, Newroz, Washûkani, and Hol refugee camps continue. We provide both moral and material support for women. In 2022, we will develop more projects. We will provide more economic support for women.”