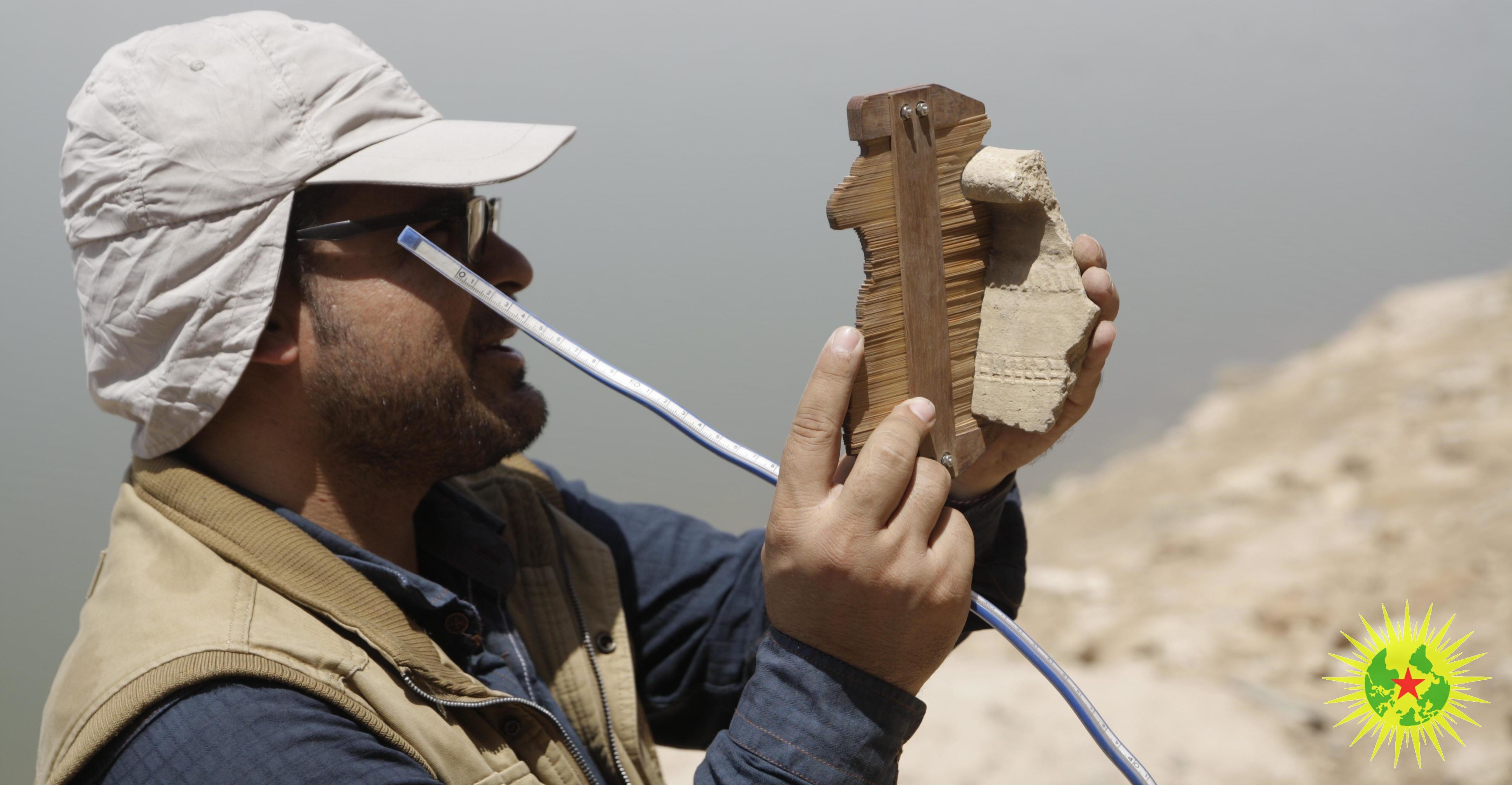 Rojava is home to many of the oldest sites of human society, culture and history, dating back 5,000 years or more. Members of the Internationalist Commune, together with archaeology students from Rojava’s Tevgera Xwendekaren Demokratik (TXD, or Democratic Students’ Movement), recently visited several of these ancient sites as part of a joint education. We saw how remnants of over settlements, cities and temple complexes have stood the test of time, hidden beneath the earth.

But since the beginning of the 20th century, excavations have taken place. Many of the objects that have come to light, such as the Pergamon Altar, are since this time in the hands of the Western colonial powers. The objects are now displayed far away from their original location and completely ripped out of their context in the museums of Europe.

“It is an essential part of colonialism that the colonized peoples are deprived of the history which forms a vital part of their identity. To this day, this form of oppression and exploitation continues.”

Moreover, the fascist Turkish state deliberately bombed and destroyed ancient monuments and religious sites – including UNESCO world heritage sites dating back 3,000 years – during their violent onslaught on Afrin. They sought to obliterate the history of religious diversity in the region, and wipe out Kurdish society’s ancient connection to the land.

Daesh [Islamic State] likewise plundered ancient sites before their defeat by Rojava’s democratic forces, with many of the treasures they stole ending up for sale in Western auction houses.

It is an essential part of colonialism that the colonized peoples are deprived of the history which forms a vital part of their identity. To this day, this form of oppression and exploitation continues.

Before and during these excursions, there were seminars on archaeological and historical topics, along with discussions on jineologi, the history of Kurdistan and the principles of the revolutionary movement here. The aim of the education was to give as broad as possible an overview about the history of societies, and to show how this history lives on to this day and is reflected in the social structures of the present.

We were studying alongside Kurdish and Arabic students, some of whom were well-connected to the revolutionary movement but some of whom were hearing these revolutionary analyses of history for the first time. For many of us this was our first time in Kurdish society, and studying in Kurmanci for a week was a big challenge – but also a chance to rapidly improve our language skills, and see the movement’s ideology in action among the local youth.

For our first trip we visited the ancient community of Til Bede near Heseke. Many remains of temples and houses were dug up and reconstructed there, on foundations from about 3000 BC. During this time about 20,000 people lived there. It was very impressive to see this old place full with history and to walk through the streets and houses, seeing how the holy quarters were kept divided from the general population as social hierarchies emerged in this nascent society.

European archaeologists fled the site with the outbreak of the Syrian Civil War, and the earthworks were now sadly untended and full of trash. When we do not care for ecology, or are forced to abandon this priority by war, we begin to lose touch with our history.

The next day we visited another ancient site, dating back to the Assyrian civilisation. Remains of walls dating back thousands of years are located directly next to a reservoir, half-buried next to an inconspicuous hill. There are also some caves, ancient earthworks repurposed by Daesh to use for shelter against airstrikes.

There are potsherds and bones scattered all over the place, which are obviously very old, even dating from the beginnings of these settlements several thousands of years ago. A friend found – to the surprise of all and entirely by chance – a stone plate marked with cuneiform. The teacher estimated it was 3,000 years old, yet it was lying there there just like that.

The official excavations have not started there yet and it will probably take a long time for this to happen. Our teacher told us that the reservoir was deliberately located there by the Assad regime, destroying many other architectural links to the past which now lie decomposing below its dirty waters. Meanwhile Daesh can plunder the sites with impunity, in effective collusion with Western states who turn a blind eye to the sale of looted goods.

We made a final visit to Girê Moza. This place has been excavated very widely and many of the remains of temple complexes have been uncovered and partly reconstructed. Here, we saw how the proto-state’s physical structure came to mirror repressive social hierarchies at this time in human history, with only the king granted access to a holy place where he could commune with his ancestors.

This reflects Abdullah Öcalan’s work on archaeology, which we studied in the classroom in between trips. As humans moved into larger settlements, they left behind the natural society in which they lived in egalitarian, decentralised groups without patriarchal structures.

With the accumulation of wealth in the hands of powerful men came oppression, sexist domination, and the abuse of religion to keep the general population under the dominion of the elite. Having met these ideas in education, we could see them in reality on the land before us.

“The enemies of the revolution are working to destroy both the present and the past.”

As ANF found in their recent report on Rojava’s archaeological heritage, “Northern Syria is the direct cultural and geographical continuation of cultures on the historic hill of Göbekli Tepe and Newala Çori, and has many places of immense historical significance…. The history of the Neolithic, in particular, acquired a new meaning for society through the revolution, which it understands as part of its essence.“

The enemies of the revolution are working to destroy both the present and the past, demolishing and denying Rojava‘s links to millennia of human struggle. On our travels around Rojava we saw clearly that the two cannot be separated. By defending archaeology, we are defending our history, our land – and our future.