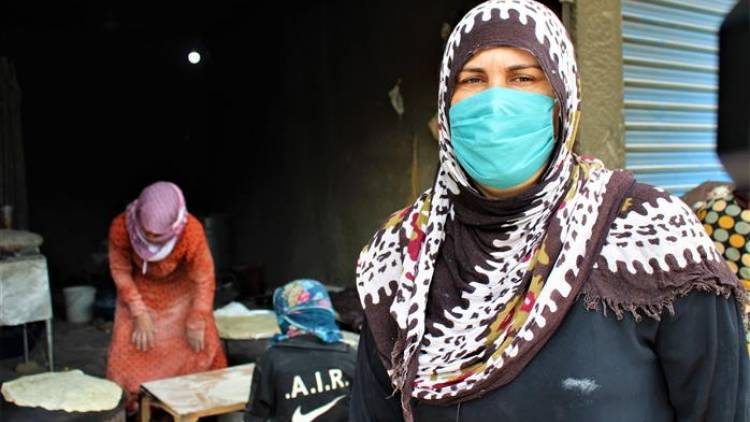 Iman Süleyman bought a bag of flour to make bread in Til Temir and now she has her own bakery. “Women can work in every field under all conditions. We can heal the wounds of war with solidarity,” she said.

Peoples in Syria, particularly Kurdish people, lived under the pressure of the Ba’athist regime for years. In 2014, they faced the horrible face of war when Daesh began to attack. Despite everything, the Syrian people have welcomed their new life while rebuilding their houses, expanding their organization. Women, who have carried the heaviest burden of the war, have managed to take part in every field of life. İman Süleyman is one of these women.

She decided to work after being displaced

Iman Süleyman had to flee from Deir ez-Zor with her four children due to the clashes between the Ba’athist regime and Daesh in 2017. They had to move to the Til Temir town of NE Syrian Hesekê city. “Nobody wants to leave their homeland and migrate to other places. This was not a choice but an obligation for me,” said İman Süleyman while talking about how they were forcibly displaced to Til Temir. “Here was safe and there were opportunities for my children’s education but there weren’t many job opportunities for us. My husband and children had difficulties finding a job. I asked myself, ‘Why shouldn’t I work?’ and I decided to work,” said İman Süleyman to tell us how she decided to work.

“I bought a bag of flour to make bread”

Iman told us that her daughter got sick and she had to undergo surgery but they couldn’t afford to pay the surgery costs, “After I decided to work, I bought a bag of flour to make bread. When I saw people bought my bread, I kept making bread. My neighbors bought bread from me to support me. I paid the surgery costs of my daughter in this way.”

“We can heal the wounds of war with solidarity”

Nowadays, three women work for the bakery, “We make bread to meet people’s needs. We don’t use any machine. We knead the dough and then bake them. We aim to make other products such as pies, cakes, and biscuits in tandoor. We are making preparation for the Ramadan Feast. As women, we can work in every field under all conditions. We can heal the wounds of war with solidarity.”