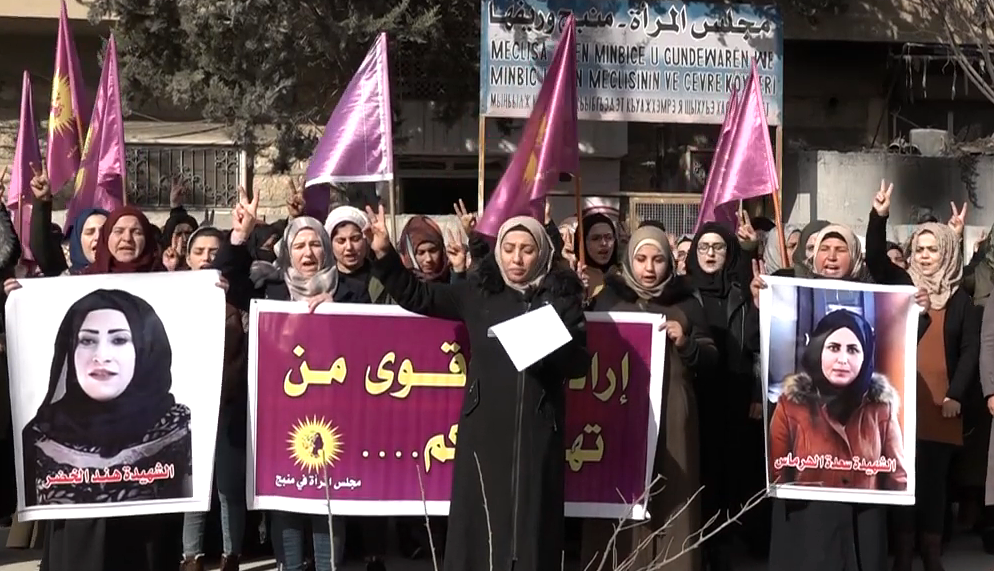 In memory of our two friends Saada al-Hermas and Hind al-Khedr, who were murdered in a targeted attack by the Islamic State (ISIS) on 22 January 2021 in Shadade, Heseke, we publish this dossier. It sheds light on the role of the two women who worked as activists and members of the Auonomous Administration for the improvement of women’s and society’s living conditions as well as for the communal coexistence of the peoples in North and East Syria. It sheds light on the patriarchal mentality of ISIS, which targets representatives of the Autonomous Administration and Arab tribes with its attacks in mainly the Arab areas in order to keep the region unstable and to intimidate the people in North and East Syria as well as to turn them against the democratic projects. In this context, the targeted assassination of Saada and Hind was mainly directed against women who are actively working for women’s liberation and play a leading role in building a self-organised society in North and East Syria.

We remember Saada al-Hermas and Hind al-Khedr as women who dedicated their lives and all their activism to the struggle for a democratic, pluralistic Syria and a democratic Middle East based on the liberation and freedom of all women. They show us that united and organised, we are taking decisive steps towards building a democratic coexistence, a democratic nation. But here too there are attempts to destroy these steps of women. As the Kongra Star women’s movement and as women worldwide, we will not stand still because of these femicides. We are ready to resist and put an end to both femicide and patriarchal mentality once and for all.

With resistance we will fight back! Organised, we will stop the femicide!
Şehîd namirin! – The fallen are immortal!

On 22 January 2021, in Shadade, in the Heseke region, the two local politicians and activists Saada al-Hermas, co-chair of the Til El-Shayir Municipality Civil Council, and Hind al-Khedr, her deputy and in charge of the Economy Committee, were abducted and murdered.

According to neighbours and families, a group of unknown and masked armed men stormed the houses of the two women in the evening. They forcibly entered the houses, abused them and their family members and
threatened the women, families and people in the neighbourhood with their weapons and to kill them. Finally, posing as a secret service, they abducted the two women to an unknown location. It was only hours later that the bodies of Hind and Saada, which showed signs of torture, were found by neighbours several kilometres away from their homes outside in the barren landscape in the Dashisha area on the main road of Shadade.

Almost 24 hours after their bodies were found, the Islamic State (ISIS) claimed responsibility for the murder of the two women in a statement.

The killing of Saada al-Hermas and Hind al-Khedr is one of a series of attacks and threats by ISIS against members and representatives of the Autonomous Administration and Arab tribes in the region. Already before
their murder, both women had received several threats from ISIS, but they did not let themselves be intimidated by them. The bodies of the two women were buried without a burial ceremony due to threats from ISIS against the families. These threats against the family, their environment and especially against other representatives of the Autonomous Administration continue until today.

Although the last cities were liberated from ISIS control in 2018, the region still struggles with ISIS sleeper cells. With their underground structures formed in Iraq and Syria, these networks continue their attacks against the
population. Especially in regions with a majority Arab population, such as Shadade, which is close to the IraqiSyrian border, as well as in Deir ez-Zor, Raqqa and Hama, attacks and assaults have increased significantly recently in order to keep the region unstable and to intimidate the people of North and East Syria and turn them against the democratic projects that are gradually being built in the region against the backdrop of the complex situation.

The targeted killings of Hind and Saada are mainly directed against women who are actively working for the liberation of women and are a leading force in building a self-organised society in North and East Syria.

2. Who are the murdered and targeted women?

Hind al-Khedr was born as Eslam Latif al-Khedr in the town of Til ElShayir in the district of Al-Dashisha in Heseke. As the youngest daughter,
she grew up in Til El-Shayir and graduated from school. After she got
divorced, she lived with her family and was a single mother of a daughter
who is now 4 years old.

She was very interested and worked hard to participate in the activities of
the Autonomous Administration and thus take steps towards a democratic
society. In doing so, the struggle for women’s rights was particularly
important to her and increased her interest in the Kongra Star women’s
movement. Her life was unstable and marked by many contradictions,
but despite these many challenges she never gave up. Out of responsibility
towards her daughter, her family, but also towards her society, she started
working for the Economy Committee from 22 January 2020. There she
was very committed, actively participated in any activities and continued
her struggle for a democratic and communal society. She was convinced and loved this path she was taking and gave all her commitment to stand up for women’s rights and strengthen the fellowship between the Kurdish
and Arab populations. People around her describe her as a very lively and social person with a joyful spirit with which she always gave strength to those around her. With her commitment, she sent a clear signal in the struggle of women for their liberation and made it clear that by organising together they have found a way out of the darkness. The murder of Hevrin Khalaf in 2019 moved her very much and strengthened her will to continue the struggle of women against any kind of male-dominated behaviour and to become a voice of women.

Saada Feysel El-Hermas was born in Til El-Shayir in 1993 and came from
the Giheshi tribe. She attended school until the ninth grade and then got
married. After she got divorced, she also raised her two children alone,
one now one and a half years old and the younger one six month old.

Saada, like Hind, saw great importance in the struggle for women’s rights
and therefore contacted the Kongra Star women’s movement several times
with the desire to work with them. She too became part of the Autonomous
Administration on 1 Januar 2020 by being elected co-chair of the Til ElShayir Municipality Civil Council. She was very committed in her work,
actively participating in any activities and actions, wanting to be involved
and always looking for the connection to the people. She was a social and
friendly person who was proving with her struggle that women with their
strength and will can be recognised.

Hind and Saada came from the same town and joined the work at the same time. Both showed with their will
and strength the power of women in the struggle to build a free and democratic society based on women’s
liberation.

The assassination of the two local politicians Saada al-Hermas and Hind al-Khedr joins a chain of targeted attacks and assassinations of women in North and East Syria that are explicitly directed against the autonomous
organisation of women and the women’s revolution in Rojava. It is a targeted attack on civilian women who play a clear role in politics, who are involved in women’s and/or democratic organisations and who break with traditional patriarchal role models.

In this context, the targeted assassination of two Arab women who were organised in local structures of the Autonomous Administration aims to intimidate and discourage women from organising and fighting for their
rights. It is a direct attack on the achievements of women who have made decisive steps within society with their struggle against traditional patriarchal role models. With their activism, they play an important role in
the women’s revolution in North and East Syria and in building a democratic coexistence of peoples. The united force of the women in North and East Syria, their common struggle and alliances provide a clear alternative to the oppressive male domination system of ISIS, which seek to divide and rule the people and peoples of the regions.

The all-out war and attacks against women, their bodies, lives and organising, and especially the targeted killings of organised women, aim to silence the voices of those resistant women who rise up against oppressive
violence and challenge the ruling system by building democratic societies based on women’s liberation. Because they clearly show that women are the pioneers and the dynamic engine in building a democratic, self-organised society.

We remember Saada al-Hermas and Hind al-Khedr as women who have dedicated their lives and all their activism to the struggle for a democratic, pluralistic Syria and a democratic Middle East based on the liberation and freedom of all women. They show us that united and organised, we are taking decisive steps towards building a democratic nation.