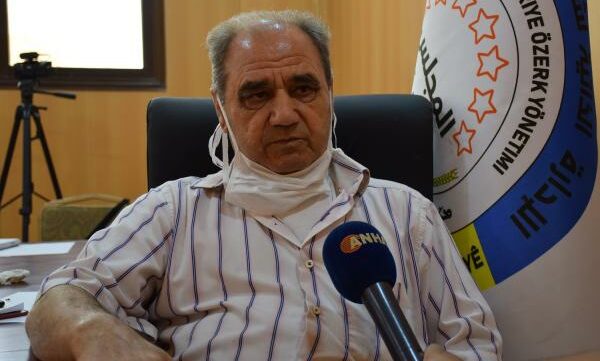 The Co-chair of the Local Administration and Municipalities Authority in North and East Syria said that the main reason for the drinking water crisis in the city of Al-Hasakah is the Turkish state’s cuts off water far from morals. He called to put an end to this criminal act against civilians.

The Turkish occupation state continues its hostilities against the Syrian people by cutting off drinking water to thousands of residents of the city of Al-Hasakah, after it occupied Alouk [water] station.

In this context, [Hawar News] conducted a meeting with the Co-chair of the Local Administration and Municipalities Authority in the Autonomous Administration of North and East Syria, AANES, Joseph Lahdo.

At the beginning of his speech, Lahdo said: After occupying the water stations by the Turkish occupation, we developed a strategic project and it will be put into use.

He continued: The project is not a radical answer for the crisis, rather, it solves 50% of the water problem by digging 100 wells in the Al-Hama area. 25 wells will be operational within a week as a maximum, and the estimated amount of water to be pumped is 100² meters, which will partially supply Al-Hasakah. 100 wells are going to be dug to alleviate the insurance problem.

The Municipal Administration Authority in northeastern Syria, have made it our duty to restore water to all neighborhoods of the city of Al-Hasakah, which suffers from great water scarcity, for many years, dating back to 1980, when many strategic plans were drawn up for the return of water as soon as possible.

On the political developments related to Al-Hasakah water, Lahdo, the Co-chair of the local administration authority, said: The main reason for the drinking water crisis in the city of Al-Hasakah is the hostile policy taken by the Turkish state for all components of the people in northern and eastern Syria, which offered thousands of martyrs in order to gain freedom.

He added, “In light of international absence and the inaction of human rights and humanitarian organizations, there are nearly two million people in inevitable danger due to the reckless policies that the Turkish state relies on in order to fight the components of the Syrian people in northern and eastern Syria.

During his speech, he pointed out that there are special workshops working to draw water to Lake Hama, which will feed large parts of the city, so that this project will be a point or pillar of hope for the return of water to the city of Al-Hasakah.

He continued, saying: “Hundreds of mechanisms in the people’s municipalities in the Al-Jazeera region are working in coordination with fire engines to provide water to our people in the city of Al-Hasakah for free. There are many special mechanisms that also work to deliver water to the people.”

At the end of his speech, he called on the United Nations Council, the Security Council and the International Alliance to find a solution to the practices of the Turkish occupation against the peoples of northern and eastern Syria, especially the issue of the deliberate cutting of drinking water in Al-Hasakah.