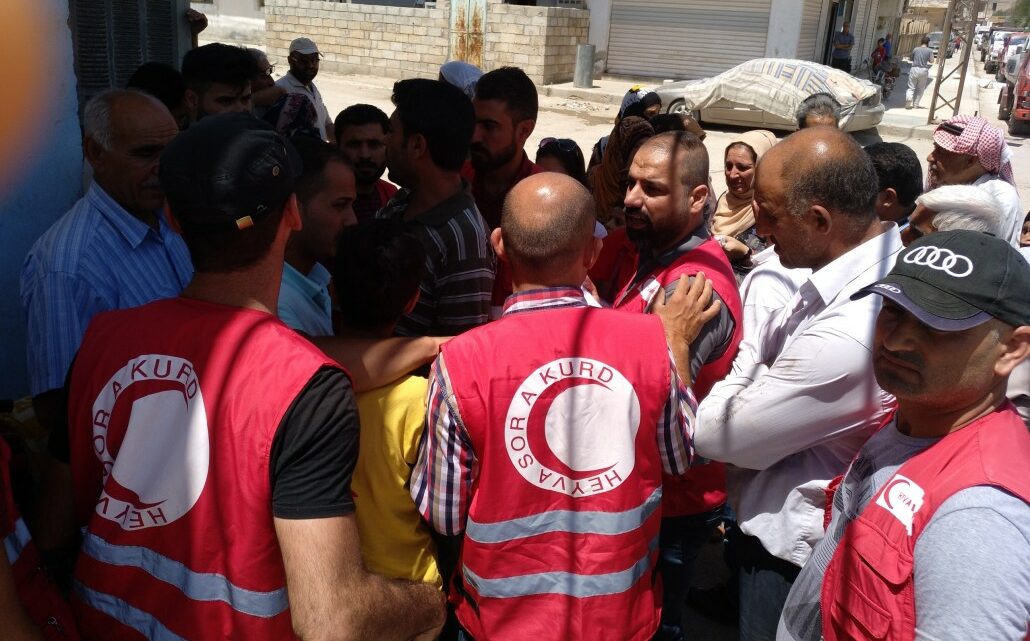 Developments in aid delivery and NGO sector in NES since 2011

In the face of the mass displacements the region has seen in recent years, aid from international organizations has been slow to arrive and inadequate to meet the needs. The situation is stabilising as aid efforts become more coordinated and organized. The primary health NGO delivering frontline services is the  Kurdish Red Crescent in Syria,  Heyva Sor a Kurd. The Kurdish Red Crescent was founded in Syria in 2012 with support from international organization, Heyva Sor a Kurdistanê, which has been operating since 1993.[1] As a locally-rooted organisation, the Kurdish Red Crescent is well placed to coordinate with local Civil Councils, as well as with the Autonomous Administration of North and East Syria (AANES).

There have been ongoing challenges in ensuring that international aid designated for the Syrian conflict arrives in North East Syria. In the earlier years of the conflict, aid from the international community was largely channelled through the Regime in Damascus and Turkey – both of whom focused the aid chiefly within their respective zones of control.  While over 6 billion dollars of payments were provided to Turkey between 2016 and 2018 with the intention of preventing refugees from reaching Europe, the camps in northern and eastern Syria were largely ignored, leaving the AANES, the local Civil Councils and Kurdish Red Crescent to support hundreds of thousands of IDPs and refugees, largely on their own.[2]

Since the deepening of the humanitarian crisis – particularly since 2015 – some international aid organizations also began to support humanitarian works in North and East Syria materially and with specialists. However, the available support falls far short of the level of need and additional aid is urgently required.

The territorial defeat of ISIS in March 2019 signified a new phase in the humanitarian crisis, with thousands of families pouring out of the last pocket of ISIS. The addition of tens of thousands of IDPs, many of them affiliated to ISIS, placed an incredible strain on the region’s refugee and IDP camps – particularly Al Hol camp. In response to this situation, the provision of humanitarian aid in Al Hol camp has become more stable and there are now more than 20 different aid organizations involved, coordinated by the camp administration.[3] .

In many instances, due to the poor security situation then INGOs may provide donations and logistical support but rely on local NGOs for on-the-ground, frontline work. In Deir-ez-Zor, for example, 7 INGOs are supplemented by a network of over 65 local NGOs, with many of these local NGOs receiving financial support from the US government or other major NGOs from states with an interest in the region. To take one example, an INGO donates food aid bags to a local partner, al-Yamama, which gives the food aid to local councils which pass it on via the neighbourhood communes to needy communities – but this program only meets 20% of demand in the communities which it serves.

Turkey’s 2019 invasion of NES further complicated the situation. As Turkish-backed jihadi groups swept across the region backed by Turkish airstrikes, most international NGOs withdrew all their foreign staff and paused some or all of their programs, in Hol and elsewhere. Most NGOs have now restarted programs, but many have withdrawn altogether from western regions like Manbij, Raqqa and Kobane where there is no longer any US military presence, while others have scaled down their operations. NGO facilities in the zone of occupation, such as an MFS-run hospital, have of course been shut down. Even more than before, as described above then many international NGOs deliver supplies but rely on local NGOs to distribute the goods and deliver services. The situation is also worsened by Turkish-backed groups firing on civilian traffic on the arterial M4 highway, meaning aid deliveries to western regions of NES have to take a dangerous, lengthy southern route through Raqqa – thus reducing the amount of aid delivered to these regions by hundreds of trucks per month.

Officially UN-recognized camps such as Hol and Roj camp, housing ISIS suspects, plus other major IDP camps such as Mahmoudli, benefit from INGO support. Other camps, however, lack official recognition and so miss out on support – most notably, the 200,000-strong IDP population of Shebha region is not supported by any major INGOs, and is reliant on the AANES and Kurdish Red Crescent to deliver humanitarian services. In terms of coronavirus preparedness, for example, the WHO is only supporting a facility in Hol Camp, and not in camps for those displaced in the 2018 or 2019 Turkish invasions. Many other unofficial and ad-hoc camps in Deir-ez-Zor and Raqqa, or near the frontlines of the 2019 invasion, also lack any external support and rely on local NGOs and AANES distributions. A local NGO officer estimated there are 40 villages on the Heseke–Til Temir line housing IDPs who fled the Turkish invasion, reliant on local NGOs as INGOs are unable to enter this dangerous area.[4]

A major factor limiting the provision of assistance to displaced people in NES has been the lack of international recognition of the AANES’ de facto autonomy. UN agencies responding to international crises must work through the recognized authority over a region or else receive a special mandate from the UN Security Council to operate without that body’s direct authorization. In Syria, the only recognized body is the Assad Government in Damascus, which has consistently prevented or restricted humanitarian access to areas outside its control.[5]

International NGOs have criticized UN Agencies for electing to co-operate with the Assad Regime and to consider it a “genuine partner,” in spite of its record of massive human rights violations and politically motivated obstruction of aid distribution.[6] Refugees International has gone as far to say that “The UN Office for the Coordination of Humanitarian Affairs (UNOCHA)… cannot perform its function in the northeast”[7] due to being registered in Damascus.

Previously, a separate working group had been established through the UNHCR’s centers in Jordan and Iraq to provide aid to areas under opposition or Autonomous Administration control in north and east Syria.  However, at the beginning of May 2019, the UN had decided to consolidate the coordination of all humanitarian aid for Syria in Damascus.[8] In January 2020, the UN closed down the sole aid crossing bringing UN aid into North and East Syria. As a result of a Russian security council veto, which was backed by China. Crossings into regions held by al-Qaeda offshoot Hayat Tahrir-al-Sham and Turkey remain open, though these are also facing closure in the future.

This means all UN aid into Syria is now sent into areas controlled by HTS, factions under the control of the Turkish intelligence service, or directly to the Assad government. The AANES is forced to try and access UN aid via Damascus, but the reality is that most aid sent to Damascus lines the pockets of those close to the Assad government, or at most is distributed in areas loyal to Damascus. Some small deliveries have made it to NES via Damascus and the Damascus-controlled pockets of land in NES; others have ‘gone missing’ on the way.

A recent report by UN agency OCHA indicated this decision will seriously reduce NES’ ability to combat coronavirus.[9] Seven health centers in Raqqa are facing severe shortages of medicines and supplies as a direct result of this decision, with one soon to close, while the health center in Hol Camp is also severely affected. The lack of WHO and UN presence in the north-east means NGOs working in North and East Syria will not be able to access the $2,000,000,000 UN fund earmarked for combatting coronavirus.

Any aid routed into Turkish-occupied regions which now border the remaining AANES regions will of course never make it into NES, with a onetime UN plan to send aid for NES into Turkish-occupied Tel Abyad widely derided as a fig-leaf for the Turkish occupation. Authorities in the autonomous Kurdistan Region of Iraq (KRI) have also obstructed or confiscated aid into NES, though there is currently a reasonable working relationship between the KRI and NES. These factors contribute to a partial aid embargo, worsened by coronavirus, meaning NGOs in NES are constantly struggling for supplies. Presently, there are major shortages in all fields, from PPE through wash kits to medicine to coronavirus test kits.

Cancellation of UK and US aid programs

Again due to the region’s lack of political status, many NGOs face difficulties in transferring cash into the region, which has no formal banking system. The UK has decided to withdraw cash aid it had been providing to refugees in NE Syria.[10] Cash aid – direct monetary support – has been extremely useful in helping people to regain an amount of independence, to support themselves and their families, and to establish a foundation on which to rebuild their lives following years of war and displacement.  The UK government justified this decision by expressing the concern that this cash aid would end up in the hands of ISIS. However, this claim is belied by the fact that the aid is being provided through the AANES and backed by the security guarantee of the Kurdish-led SDF, described by US General Votel of the anti-ISIS coalition as “the most effective force on the ground in Syria against ISIS.”[11]  This move has also been heavily criticized by aid organizations, and is suspected to be motivated more by UK-Turkish relations than genuine concern about the financial support ending up in ISIS’ hands.[12]

External funding to support reconstruction efforts, notably from coalition partners responsible for the massively destructive campaign, has proved insufficient for the work required.[13] International donors have been wary of providing funds, citing concerns over a possible resurgence of violence and destruction if America reduces its military presence in the region.[14] Most recently, following the US’ October 2019 pullout from the western regions of NES, a USAID stabilization program in Raqqa is likely to be shut-down as the US no longer has a military presence in this region, meaning this vulnerable region may backslide and face fresh humanitarian and security crises.