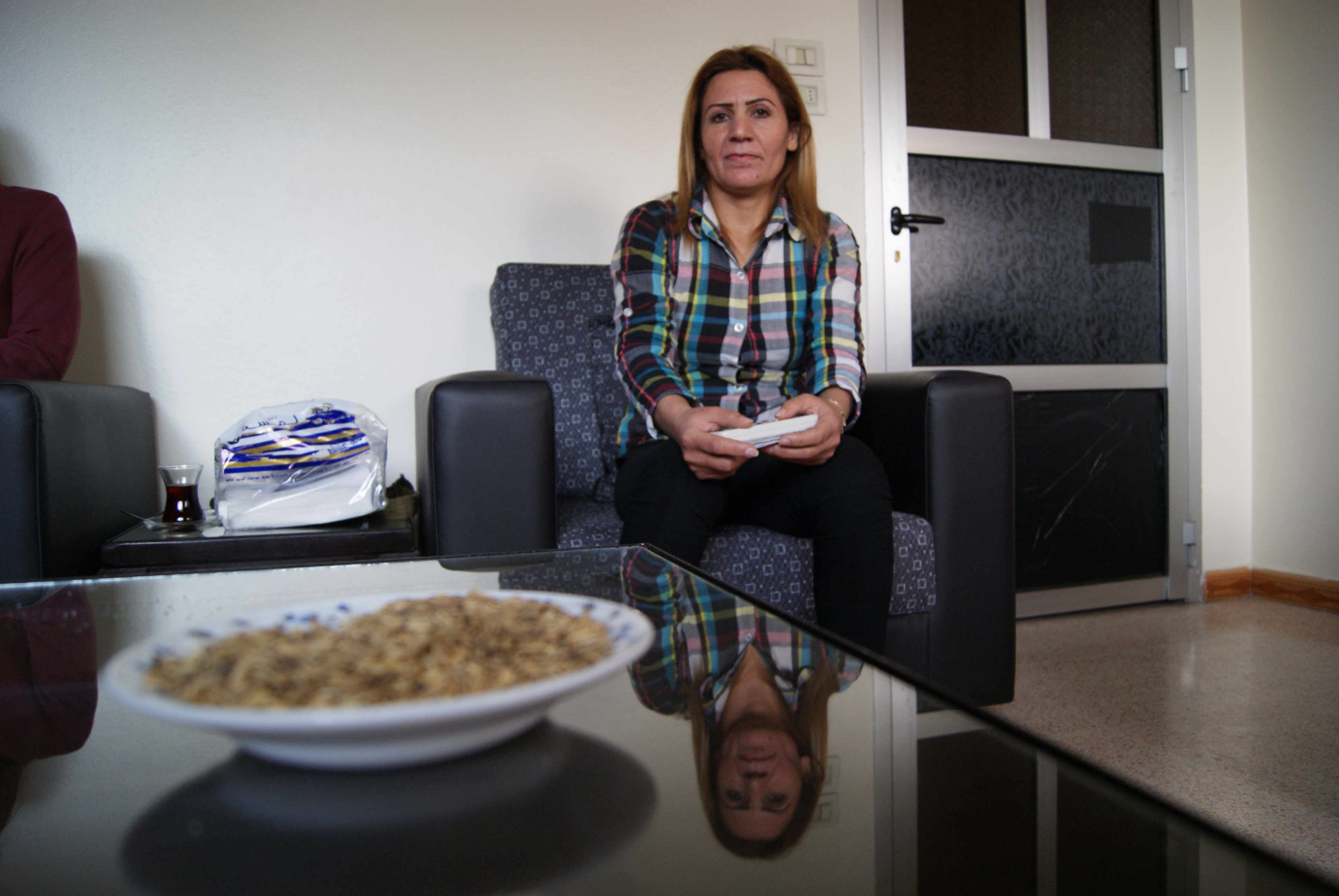 Kongreya Star is the umbrella structure of the entire women’s movement in Rojava. They are mainly active in initiating and supporting women-only cooperatives. This interview was carried out in March of 2016 and has recently been uncovered.

Could you tell us a bit about who you are and what you do here?

Here in this institution we are helping to build up the women’s co-operatives. We give land to the women, we help them to establish the co-op, and after it is up and running, we don’t have anything to do with it.

Of course, if there are problems, we help again, but we are not working there ourselves ─ only co-ordinating this work.

For example, we gave a grant of 700 square metres to 35 women and they shared it equally. Now they are taking care of this place collectively. The women got together and chose the co-ordination body: one person for finances, one for meetings, etc. There are four coordinators and they take decisions collectively. If there are any problems, they can also call here and we will help, but generally they organise themselves and build their co-op up. The people work for themselves.

At the beginning, the economy was organised over TEV DEM. The TEV DEM is mixed, they are taking care of everyone, but for a year now we have had this place where only women are organised, an autonomous women’s economic structure. We are mainly working in agriculture, but it’s not only in agriculture.

In Qamishlo there are three or four shops, there’s a tailor, there’s a co-op where people make yogurt and cheese, and there’s also three places to make clothes. Two are only military and one is civil and military clothes. One is in Qamishlo, one in Derik and one in Rmelan.

What type of agriculture is being implemented here, and on what scale? Is food that is grown sold, or kept for the workers and their families?

Wheat, barley, chickpeas, fruit, vegetables─it depends on the ground of course, and the circumstances. We have one common project with TEV DEM and Kongreya Star working together. It’s a big place with 1,400 hectares. It’s a greenhouse project with a lot of space, where we are also planting vegetables and trees. It’s a really huge place. These are the projects for agriculture. The greenhouse project is the biggest.

Our aim is not to sell. The aim is for the women to work together and meet each other, so they don’t always need to go to the men to ask for money. The women can organise their own economics, to work for themselves and organise themselves.

At the beginning, when we help, we give them the seeds. When the plants come out, they give the same seeds back to us. They can each take what they grow, or make a decision all together to sell it and share the money between the co-operative. We have a lot of different seeds. We give them to the co-ops, and the same comes back. Everything else they take as a co-operative and they have to decide what they do with it, whether each takes their own or whether they sell it together as a co-operative.

If there’s a group of women and they decide to start a co-operative, what are the steps?

At the beginning, you meet together and write a proposal. You bring it here and we look at the proposal─does it make sense, can it work? For example, there was a woman who came and said she wants to open a shop and we said it was a good idea, but in that place there are a lot of shops with the same stuff, so maybe you won’t be able to stay there by yourself very long, because a lot of other people are doing the same thing there…

We suggest different opportunities and we make a meeting with the women together and discuss the co-operatives and the idea and whether they are going to open or not, what is needed, how much money, how to collect this money, so that everyone is equally involved, etc. Then we build up the structure and have a meeting once a month all together where we discuss the ongoing process.

Especially in Derik there has been a lot of problems with the bread. It wasn’t very good there and a lot of people had problems, like diarrhoea, that they said was connected to the bread. At the beginning it was quite difficult. Everybody there was making bread by themselves, usually at home, or buying for themselves. It was important for people to come together and understand the need for a co-operative. It took a lot of time until the people actually understood this, to work together and share better and so on.

They also get more money if they work there. For example, in the dairy cooperative people make yogurt and cheese. They make like 40 – 50,000 SYP [Syrian Pounds] and this is really a lot of money that they can share. Also, the women at the beginning were a bit like, maybe we’ll help a bit, but we don’t really want to work. There were several obstacles which needed to be overcome, connected to culture, to history.

Who decide if projects will work? For example, in agriculture, if someone wants to plant a new seed and that person is convinced that it will work, are they educated in all these things in agriculture?

One thing is that we’re doing research, and we’re also going to open an agriculture research centre, to actually be able to look at what we have and what are the needs. Of course, we are working together with several people who worked there before and they understand what’s going on with the land and what works and what doesn’t. So they are discussing it on a bigger scale, not only with the co-operative, but also with the co-ordination and the local people, and they are making decisions together.

For example, [in the Greenhouse Project] they had a big meeting and some people wanted to plant wheat, but the people around there they were all like, “It doesn’t work, because if you put wheat there, the land is tired, it’s not strong enough to give all this nutrition to the plant.” So, they decided to plant half with lentils and half with something else. So they made this decision together and then they worked their own. They are also asking other experts who are here, but especially also with the people who worked before in these places, or are still working in the places, to make proper decisions which are also realistic.

Do you think it would be good for permaculturists to come to Rojava?

[Our translator is not aware of this term, so we explain it briefly. She gives her personal opinion:

“My personal opinion is that it would be very good. It’s also connected to changing the thinking about how to do things, that it’s connected to the whole system, like the air you breathe and so on, we’re all connected to each other. I think also they are working on several projects and some people have also come from outside [the region] and are working to build waste management to recycle stuff and build up different stuff that people here are not used to, because before they didn’t use this approach and also have a different way of working. I think it’s a step from both sides to build this up, but from my personal opinion it’s totally needed.]

In general, of course we’re working with a basis of agricultural understanding, which for us means we do things that don’t bring any harm to nature. For example, there was one place where we put wheat and then the next year, if we had put it again it would be good for us, but it wouldn’t be good for the ground, so we made a different decision. We are really committed to not using chemicals, not using anything that brings more harm to the ground, to the earth, or to the air.

But of course, yeah, it’s always a possibility people could come and if people have projects in mind, we could discuss this and there are also people who are involved in project coordination and helping in finding the people to talk with, what’s the right approach, how is the standard right now and how could it exist─so I think it would be interesting to discuss this. If people have a project in mind, then it’s easier. There is also the women’s project with the village. It’s especially important to have women working there and building up this village.

What has been your biggest hurdle?

Of course we are facing obstacles. At the beginning we had problems because women are not used to working, especially not outside. Women need to see themselves working outside. For them it’s a weird situation, so you have to fight against this understanding, so they will also be able to work on this. This is the biggest obstacle.

Sometimes they say, “I’ll give a little bit of money”, but it’s the man who is giving it to them, so it’s a weird situation. And they want to send workers there, but not work for themselves. So we say, “No, you want to be a co-operative, so you work for yourselves.” Then how do you do that if the people have no trust and they have this understanding that they can’t do it, and they won’t do it, because it’s hard work and they have this view on it.

So, in Derik for example, we had a big impact on the society. There were more and more women working actively. The other thing was that they managed to bring the prices down, so the people who had inflated the prices had to sell it cheaper for everyone. It was a big win for the whole city with this co-operation.

The other thing is that we have opened the co-operatives here with sheep and the cheese and yogurt one, so women see that it is actually working and if those women can do it, why shouldn’t I do it? Now it’s starting to be that the women want to be involved more and want to be part of a co-operative, but still the biggest problem is the participation of women.

In Derik we have an Economic Academy. In this academy we of course teach the specific branch of economics, but it’s also an ideological education, of understanding how you came into this role of a housewife. What could another approach be? What is a free life? And so on.

So for us it’s not about making money, it’s not to make, trade and sell stuff, it’s about bringing women together to work together. If it were just the money, now we would have more, we would have a lot of co-operatives. It’s about let’s have less, but have a really good quality of the people who are working inside, that they are really understanding. It’s not about trade, it’s about needing to build up something else─which starts with the mindset and goes into the culture.