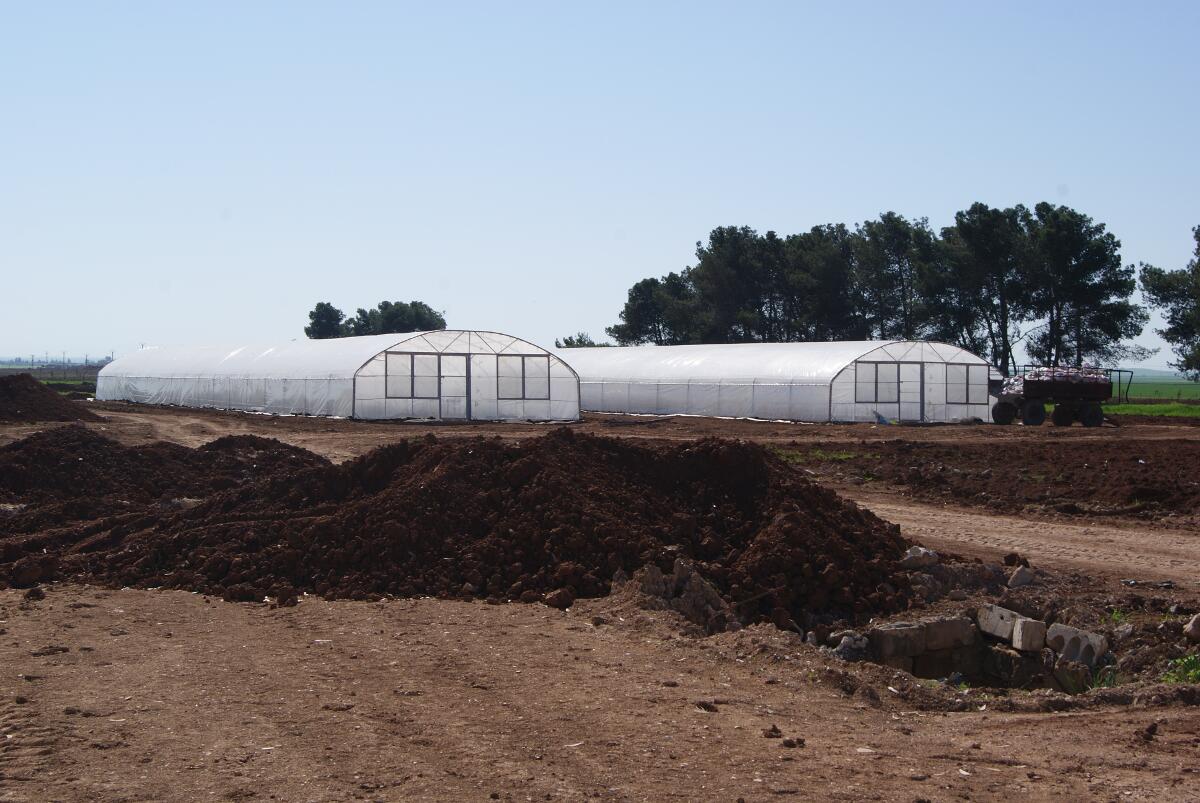 “If we don’t give this to the society then we’re going to be just like a company. Then we’re not working for Rojava, we’re working for ourselves.”

We visited Bîstanên Rojava (Farmers of Rojava, also referred to as “the greenhouse project”) on 12th March, 2016. Our aim was to understand how the project is run, and to ask questions that were discussed beforehand over a web platform by people involved in cooperative movements in the UK. Bîstanên Rojava is not yet a cooperative, but it will be soon. The structures are currently being built and seeds sewn, both literally and figuratively, for women from 18 communes to take over the space and work together, growing fruits and vegetables. As women in the area have no background or experience in farming or horticulture, an on-site educational facility is also being established.

This project is being set up by one woman, Nahide, who came to Rojava specifically for this. There are other people working with her, but they are following her vision. When the cooperative is working properly, Nahide will move on to a new part of Rojava to establish another project like this, and so on. We spent a morning with Nahide and her boundless energy and enthusiasm. She gave us a tour of the site and taught us a lot about the background to the political and economic situation in the area, the process of setting up a project like this, the difficulties they are facing, and her plans for the future.

“If you want to start with Nahide,” she told us, “the point is there is no Nahide. It’s not about I do this and you do that—we all do this. This is a job for the whole society.”

“There are Kurdish people here, there are Arabic people here. There is no difference, we work together. It’s really like this, it’s really for everyone.”

Three thousand trees, including two thousand fruit trees are being planted. This is exciting news for us, as across the whole of the Cizîrê canton, we have seen virtually no trees and absolutely no wildlife at all. They have already begun growing vegetables such as tomatoes, cucumber, peppers, aubergine and lettuce. Broccoli is being introduced soon, but slowly. People here have never seen broccoli before. Nahide stresses the need to bring in changes slowly, so that they will be accepted by the population. This is also the reason for her simply replying “impossible”, when I suggest bringing in a team of permaculturists from the UK, and for some of the other issues they face.

“People here weren’t given passports from the Syrian regime. They didn’t learn to think freely. In one year, you would just work once for three months. You harvest the crops, sell them, and the rest of the time you just sleep. Then you have to go to the state to get some seeds and to do it again. With this approach, you don’t take responsibility for the ground you work on. Because you don’t sweat for it, you don’t understand the meaning of the land. You lose your identity.”

This area is home to an abundance of a kind of black beetle that destroyed crops. They use insecticides for this reason, but Nahide is quick to assure us that they don’t affect the vegetables. They don’t use hormones, pesticides or fertilisers; only compost, manure and this insecticide.

When they first arrived here, they tested the pH level of the soil, and found it to be very low. They used sheep manure on the land and the pH level rose. Slowly but surely, the ground is loosening up. This land belonged to the Syrian regime, it was a place for animals and large-scale wheat production. Under Assad, the Kurdish people were only allowed to grow wheat in this region. Year in, year out, only wheat was grown for over 30 years. The ground is knackered.

Another challenge is the amount of pollution in the region. There is an abundance of oil across Rojava, which, due to the blockade and embargo, cannot be sold. The people of Rojava have unfriendly neighbours on all sides. They have Turkey to the north, the front-line with ISIS lies to the south, and neighbouring KRG (Kurdish Regional Government, otherwise known as Iraqi Kurdistan), is in control of the only border crossing out of Rojava, which is currently closed. We have seen stationary oil drills and plumes of smoke right across Cizîrê. The oil seeps out into the fields and is subsequently burned off. Consequently, there is a lot of pollution. Add to this the fact that there is no sustainable way to deal with rubbish, and that war has raged here for the past five years, and you can begin to see the kinds of challenges they are up against.

“This place was the front-line of the fighting when Jabhat Al Nusra came,” Nahide told us, “The regime fled. When the YPG liberated the land, they gave it back to the people, to the society.”

Nahide had been living in the UK for 11 years. In England, she had a construction company; she had a house, she had a car, but she wasn’t happy there. She says that the best decision was for her to come here. She wrote the plan for the project while she was living in the UK. She first discussed it with Yekîtiya Star, (the umbrella organisation of the women’s movement in Rojava, recently renamed Kongira Star). They then discussed it with the society communes and councils. After long discussions and a lot of meetings, it was accepted. Now they are putting her plan into practice.

Nahide doesn’t have any official training in farming or horticulture. She studied in Turkey as an engineer, and she is also a teacher. She learned to grow food in England as a hobby, researching on the internet.

“Everyone said it wouldn’t work, but it did,” she tells us. “Internet!”

She arrived in Rojava in April, 2015 and combed the area, searching for a place where this could happen. She found this place after it was liberated, and in September they started to work here. All this has been built up from nothing in 6 months.

“I have a very clear plan and that’s why I’m fast. I get up early. Everything is very clear. Dirt, war, it doesn’t matter. Sometimes people think about where they are going to die. I chose my place. You do something for the people. All you want is to do the right things and give the right things to the people.”

The women who will be working here first need to be educated. They have an education structure being set up, with an on-site academy where twenty women at a time will take year-long courses to learn how to grow food. There are currently no educational resources in Rojava about growing, but books are now being produced and a lot of research is being done.

“We study the experiences of the Cuba and China revolutions and their experiences with cooperatives, but not only that, we are discussing all the information we have of different cooperatives all over the world. Those examples (Cuba and China) are government systems. There it can change into a company, but here, no—it’s a social, democratic system. This is the first and most important difference. If it’s going to be a state or a government thing, we’ll have the same problem as these other places.”

We had come with some questions, based largely on a statement about cooperatives put out by the Tev Dem. We quickly realised that these questions were based on a model that is completely alien to what is happening on the ground, and it was difficult for us to get concrete information about this co-op as it hasn’t been set up yet. What we got instead was a deeper understanding of the background to the political and economic situation in Rojava, a lot of inspiration from Nahide’s contagious energy, and the realisation that each co-op is in fact unique, and run directly by the people involved in it. This is truly a bottom-up approach; a cooperative in the most literal sense of the word. The people who are here work together and they decide everything. It’s the community who is organising the cooperatives.

Nahide explained to us that each coop has an elected “speaker” who coordinates with other cooperatives. They discuss issues and make all decisions collectively. This project will involve 18 communes, so from each commune there will be one speaker. This particular co-op will be only for women, but others will be different.

“The communal economy is the idea in which the society creates itself,” she explained, “on everything from production, to trade, to use. This comes from the approach to a democratic society. Every member of the society is taking their own responsibility, from self-defence to economy. The work for women is on the first front-line, their situation comes first. The economic approach from a democratic society comes from the communes into the co-ops. There is not one owner or one minister, it is a place in which the whole society represents itself and organises itself.”

A big meeting was soon to take place, involving Kongira Star, the Tev Dem and the communes involved in the project. In this meeting they would have discussions to see who wanted to join and exactly how they were going to organise the co-op. This meeting had been postponed once due to fighting, and a big funeral for 15 friends who had died, but was to take place in the next few days.

Our last question to Nahide was about what the international solidarity and cooperative movements can do in solidarity with this individual co-op, and with co-ops in Rojava in general.

She told us, “We are open for all cooperatives and movements to share and to learn. This is for the whole world. We can learn from them and they can learn from us. We can all be more successful. We are open.”