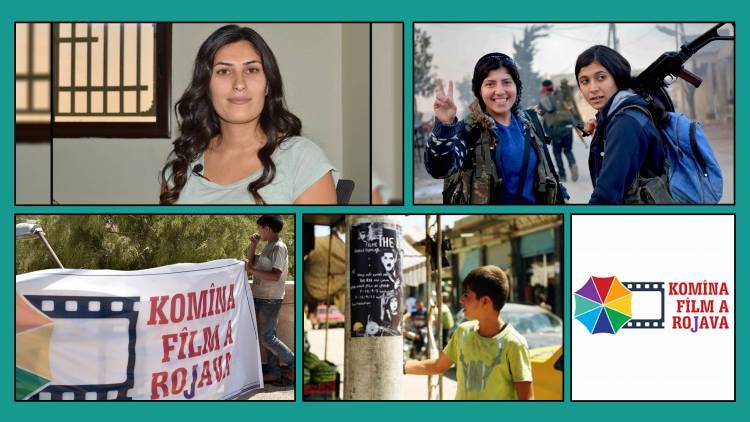 On November 13, 1960, Amouda Cinema burned down in a fire and more than 200 children died inside it. Maybe the reason why there isn’t a full-fledged cinema in NE Syria. But Rojava Film Commune keeps working to positively revive the memory of people about cinema. [Jinha Women’s News Agency] spoke to Nadiya Derweş, a board member of the Rojava Film Commune about cinema, what people in the region think about it, and the effects of women on cinema.

The concept of “borders” of Kurdish cinema has not been clearly clarified. For this reason, we don’t know exactly when the Kurdish people began to take part in cinema. The first Kurdish film Zarê was directed by Hamo Beknazarian in 1926 in Armenia. This film, which tells a love story, is known as the first Kurdish film in history. Although many films have been shot in many countries under the leadership of directors and moviegoers, the number of films shot by Kurdis isn’t known. But Kurdish-made films have become famous since July 14, 2015.

Since the Syrian Baathist regime started a fire in the Amouda Cinema located in Rojava, NE Syria, on November 13, 1960, the people of the region have moved away from watching films and cinema means a bad memory for them. The doors of the cinema were locked after 500 elementary school students entered the cinema. The cinema was burned down and 283 people, mostly children, were burned to death. Nadiya Derweş, a director and board member of the Rojava Film Commune, spoke to NuJINHA, “Cinema plays an important role in preserving Kurdish culture. We work to erase the bad memories about the cinema.”

Referring to the development of cinema in Rojava Kurdistan, Nadiya Derweş said, “In the past, there were many cinemas in Rojava Kurdistan. People watched films together. However, this culture almost disappears, especially after the Amouda Cinema Fire. People were afraid of going to the cinema. Because the Syrian regime was dominant and the people were afraid of their actions. The Revolution in Rojava changes everything, particularly in art.  Some filmmakers and moviegoers understood that shooting films is a must in Rojava Kurdistan. The Rojava Film Commune was founded to support filmmakers and the Kurdish cinema. Since our region was liberated a short time ago, the filmmakers find many subjects to shoot. The people of the region have faced massacres, battles, displacement, and abduction. They improve themselves and their society to preserve their culture, language, and identity.”

“We can tell our stories better”

Indicating that many foreign filmmakers have shot films, documentaries, and short films about the role and resistance of women in Rojava, Nadiya Derweş said, “They produced great works but they don’t know what we have gone through. For this reason, they cannot completely reflect us. We should have shot the films about the stories of our community. Because we are the ones who experienced everything and we are the ones who will give the details the most. We know our culture, our struggle, our fighters, and society better. For this reason, we can tell our stories better. We can reflect ourselves better.”

They change their society

Commenting on those who work on cinema in Rojava, Nadiya Derweş said, “At the first stage, some filmmakers wanted to create something new about the people taking part in the Revolution in Rojava Kurdistan. For that purpose, training courses on the production of films were organized and movie screenings took place. This was a very important step for the re-development of the cinema culture in our society. The first one-year course was held at the Martyr Yekta Herekol Academy. Each of the course attendees wrote a script and became [a] director. Now, they are able to shoot their own films. We don’t have a cinema now but movie screenings take place at our culture and art centers, in villages and neighborhoods. We had many challenges to win the trust of our people. In the beginning, the parents didn’t send their children to watch films or act in films. But now they trust us. They love films again.”

Many filmmakers are women

Drawing attention to the roles of female filmmakers and the situation of actresses, Nadiya Derweş continued to talk as follows: “In a cinema sector, where women are not pioneering, the definition of cinema always remains incomplete. For this reason, female filmmakers are the pioneers of the cinema sector but their number is not enough. We also faced many challenges in finding actresses. The families didn’t allow their female members to act in films. But we overcome this challenge. For instance, the film named ‘Berbû’ was directed by Safinaz Evdike. The film tells how Serêkaniye was invaded and the difficulties faced by women. The entire team of the film consists of women only – from the director to co-director, from camerawomen to actresses.”

“We have shot more than 20 short films, 7 documentary films, and 5 feature films until now and we keep shooting. The topics of films are culture, women, language, the resistance of fighters, dengbêj, and all issues that concern society,” Nadiya Derweş said, “We also organize an international film festival in Rojava. Many filmmakers from many countries sent their films.”

They have many more projects…

The Rojava Film Commune has been working on a script. “We will begin to shoot the films in the coming months. We also have a project on shooting a series. We will announce the details of the series in the coming days. We keep organizing training courses. We hope new cinemas to be open in the region.”