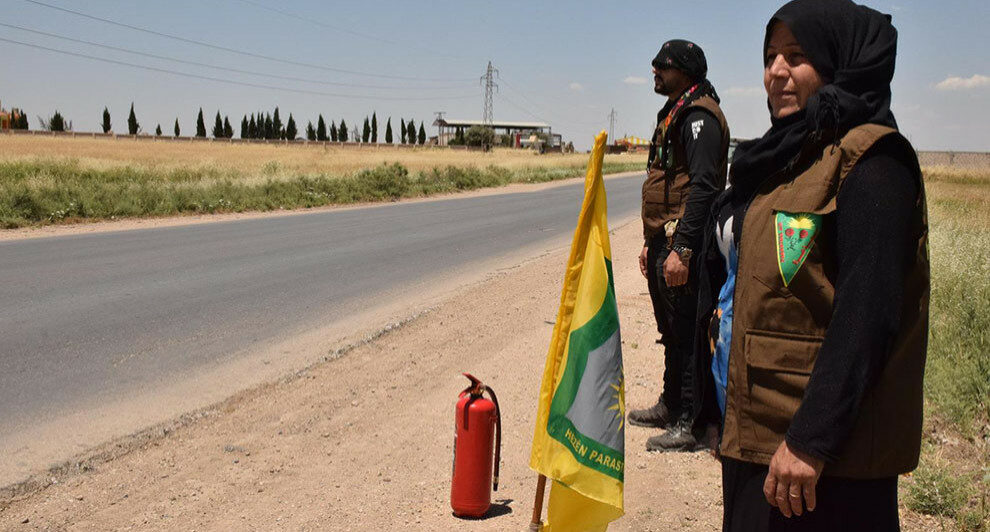 In the Cizire region of northeastern Syria, 700 women from the autonomously organized women’s structures of the Social Defense Forces are involved in patrols to protect against arson.

The targeted arson is part of Turkey’s war against the autonomous regions in northern and eastern Syria and serves the occupying forces as a method of systematic expulsion policy and ethnic cleansing. The invasion of Afrin in 2018 laid the foundation for systematically destroying the economic foundations of the population. This tactic was originally one of the methods used by the terrorist militia ISIS, which was adopted by Turkey on a one-to-one basis.

In 2019, a commission of inquiry of the autonomous administration estimated the damage caused by the destruction of cultivated areas through arson at the equivalent of 33 million euros. By the first half of the year alone, 420 square kilometres of fields with crops was destroyed by the Turkish army and its Islamist allies. This year [2020], more than 200 square kilometres of fields have been turned to ashes by arson. Turkey and its militias are doing everything they can to destabilise the self-governing areas in northern and eastern Syria and damage the economy. 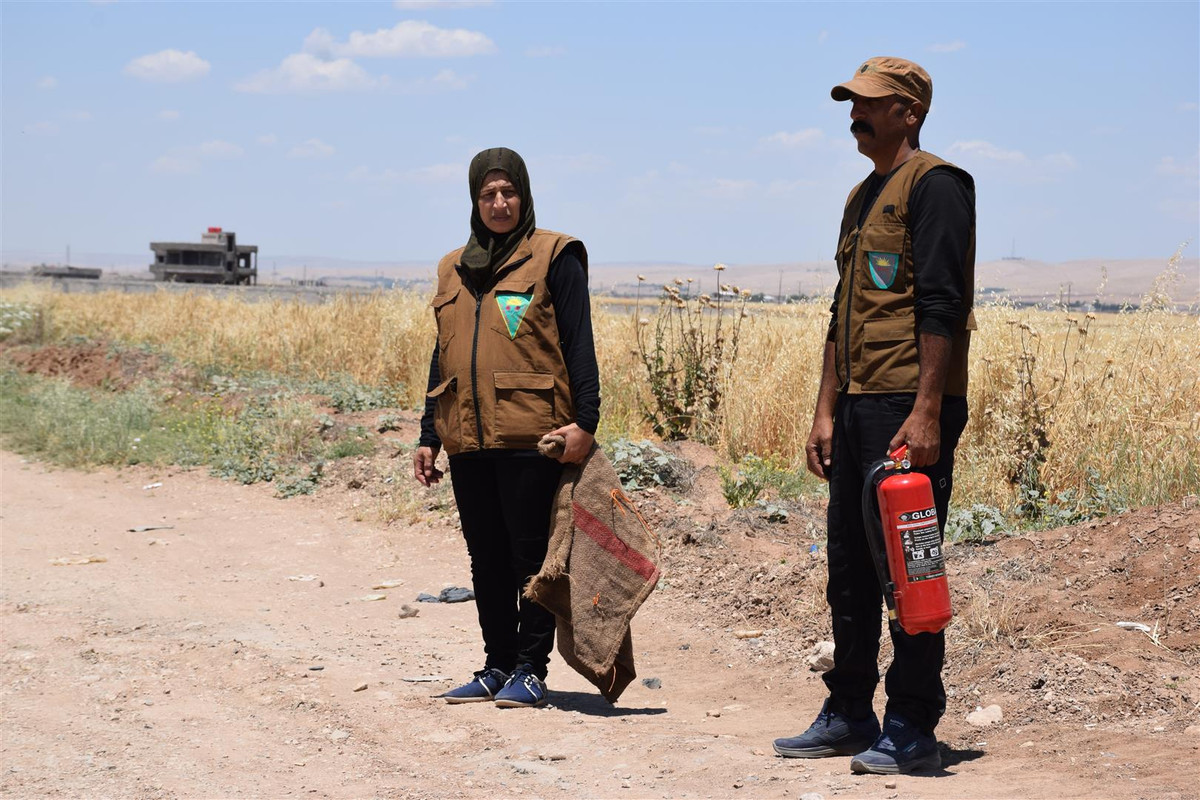 The people in the northeast Syrian autonomous region are making every effort to protect their livelihood. At the moment about 45,000 people guard the fields day and night. The volunteers consist of 15,000 members of the Social Defence Forces (Hêzên Parastina Civakî, HPC) and their autonomously organized women’s structures HPC-Jin. They are part of the “Democratic Nation” project and are directly attached to the local defence commissions. 30,000 members of the Internal Security Forces (Asayish) also protect the cultivated areas of northern and eastern Syria.

In the Cizire region, 700 women from HPJ-Jin are involved in the defense of agriculture. One of them is Fatma Mihemed, who patrols with her friends between Qamishlo and Tirbespiyê (al-Qahtaniyya). She says: “The targeted arson is nothing more than a war against the economy of our regions. Very few of us own land, that is true. But it is the duty of all of us to defend the livelihood of our entire society.” 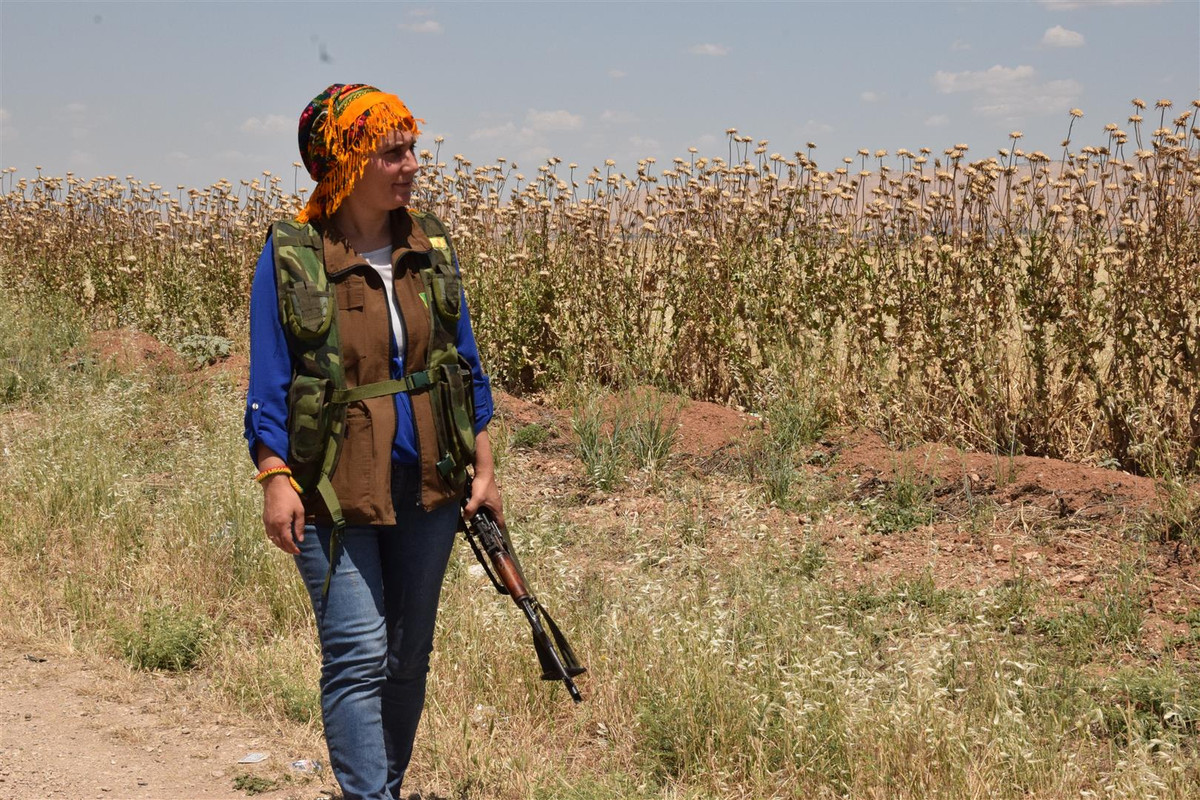 However, Fatma Mihemed feels that fires caused by discarded burning cigarette butts are at least as bad as deliberate arson by the occupying forces. “We must strengthen our awareness of a sensitive and sustainable approach to nature, also for future generations. The landscape of Northern and Eastern Syria is part of the cultural and geographical identity of our region.”

Each person must feel responsible

One of Mihemed’s friends is Evîn Ibrahim. When she is not on patrol with the women of HPC-Jin, she sits on the El Tenûriyê People’s Council as a municipal councillor. Ibrahim also believes that the careful treatment of nature must be a concern for all people in northern and eastern Syria, and that the border strip in particular is a very sensitive zone. 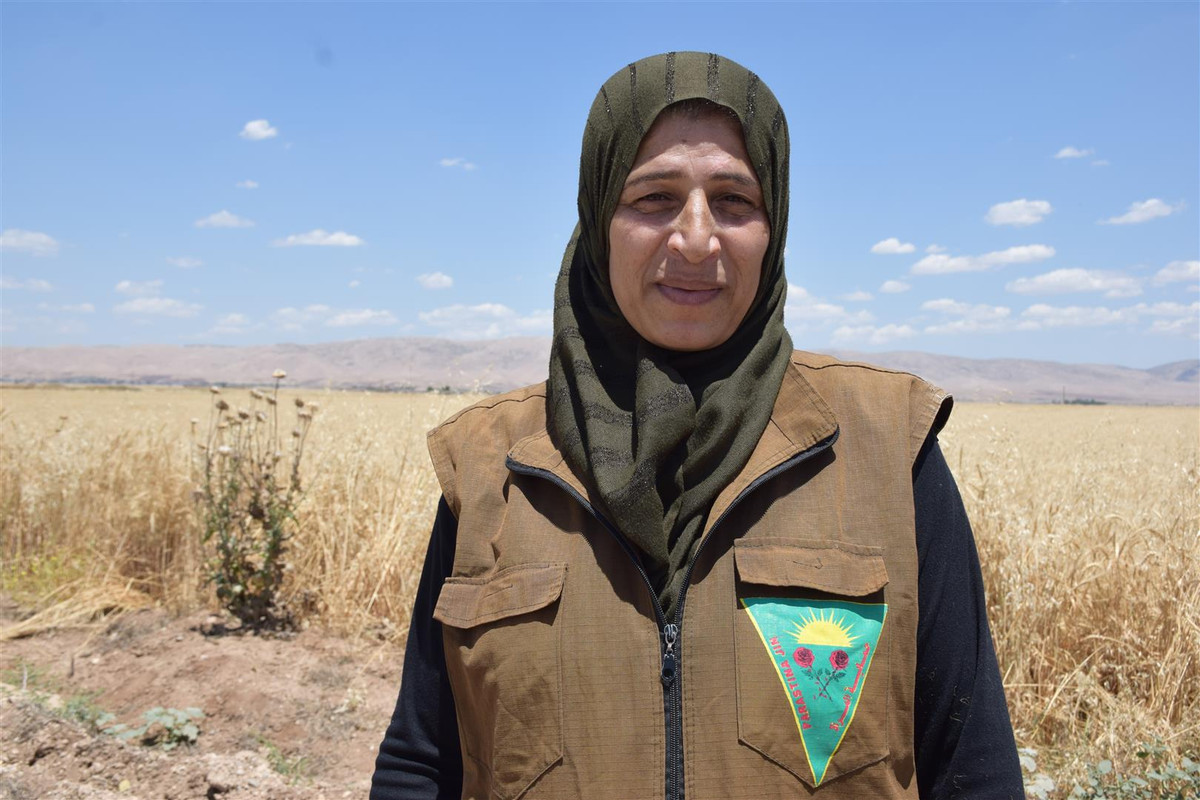 Mihabad Adnan Omar adds that many field fires were prevented this year thanks to the intensive efforts of the security forces and autonomous administration authorities. “Of course, it is almost impossible to catch the perpetrators, as the majority of agricultural land is under artillery fire from Turkish border guards or Islamists. However, since the security forces and fire brigade are positioned in such a way that they can reach even the most remote residential areas within minutes, many field fires could be extinguished before they spread”.