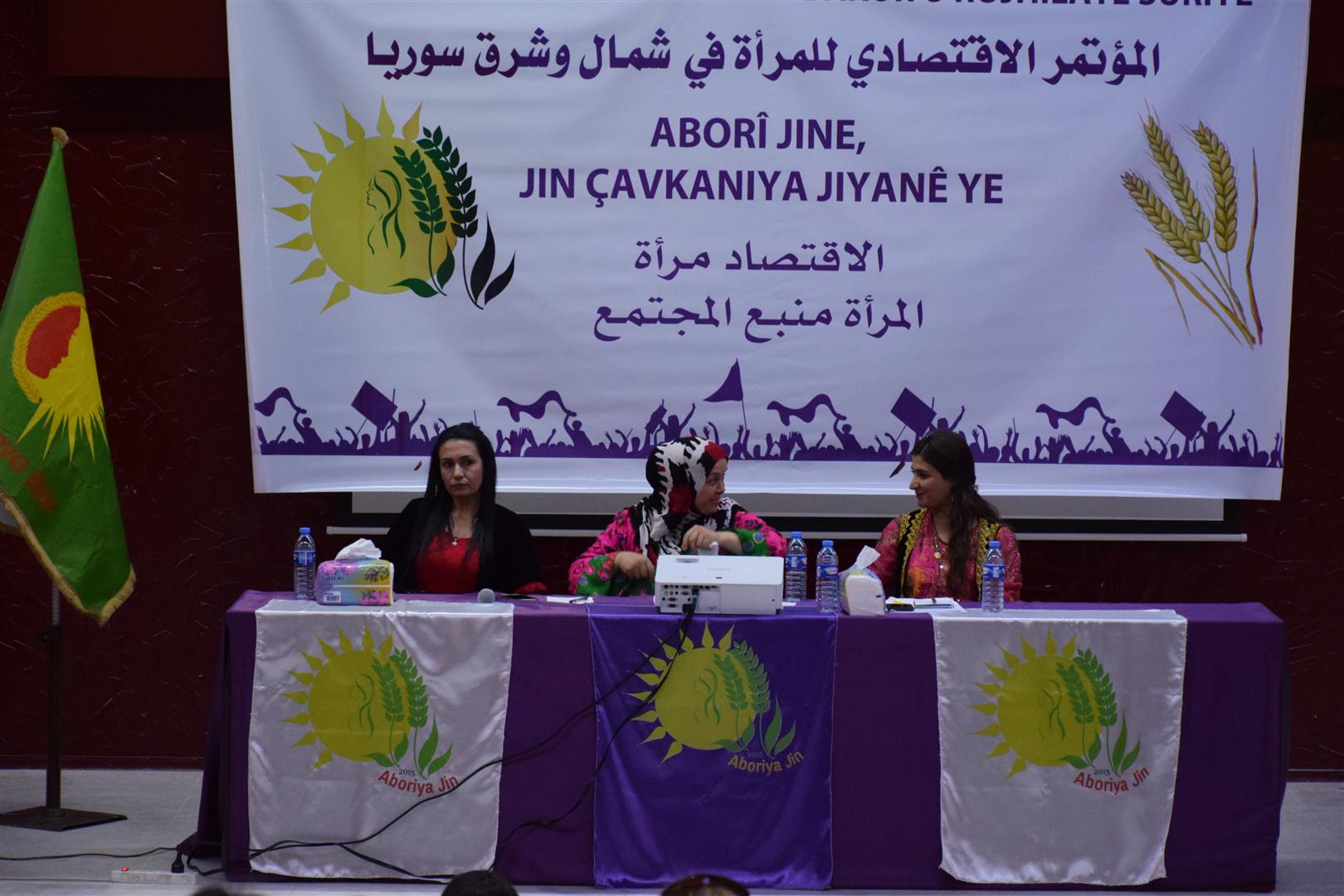 One of the main areas of work of the women’s association Kongreya Star in the autonomous region of North and East Syria is women’s economics. Dicle Ezda is one of the coordinators of this work and commented on it in an interview with ANF.

What role have women played in the economy since the beginning of the Rojava revolution?

Women’s work in the economic sphere pursues a fundamental goal: to create space in production for women who are traditionally excluded from gainful employment and have no sources of income of their own. To this end, their own resources must be created. Unemployment and poverty should not be fought only through employment opportunities, because this merely makes women workers. Our goal is to create a collective women’s economy. To this end, the corresponding market must be organized. Our policy is to build production facilities for women and to offer the products without middlemen.

Autonomous economic activities by women are directed against the patriarchal monopoly and democratize the economy. We are currently experiencing a development process in which the demand for “equal pay for equal work” is intended to achieve gender equality and democratize the economy. If domination in the domestic and labor spheres is reduced and women’s labor force is increased, this means a socialization of the economy. Women play an important role in Rojava.

What concrete developments are there in the social women’s economy and the co-operatives associated with it?

Women’s co-operatives are the primary method of social economy against the capitalist economic system. There are now 22 agricultural women’s co-operatives and 18 other co-operatives. We provide the land and the necessary resources and the women participate with their labor. The income is divided fairly among the women according to the respective work assignment. The women’s economic committee also builds workshops and agricultural enterprises that are not direct co-operatives but are only just on the way to becoming one. The reason for this is that the gap between qualified and unqualified work prevents stable participation. The committee assumes a kind of judging role in this process. We follow the principle of distributing income fairly.

Our co-operatives have now reached a point where they can stand on their own feet. They are becoming increasingly stronger and are building up their own sales markets. This is the result of a lot of work and great struggles against the adverse conditions.

The Turkish state occupies some areas in Northern Syria. What effect does the occupation have on the women’s economy?

The occupation is a tragedy especially for women. The demographic change has led to large migratory movements and damages the economy as a whole. Flight is always accompanied by a loss of economic opportunities and impoverishment and low wages. The destructive effects of the occupation are particularly noticeable in the economic sphere. The population is robbed, their property is plundered. Displaced people are always and everywhere cheap labor, this is a cruel law under capitalism. The human labor force and the social economy are exploited and colonized. These economic losses lead to the commodification of women’s bodies, the devaluation of women’s work and the relegation of women to the domestic sphere. Fugitive women are the cheapest workers and are exploited as day laborers.

We take measures to protect women from this. In order to establish a women’s economy in the camps for refugees, an agricultural co-operative for women from Serêkaniyê is being planned. In Shehba this work has already progressed. To prevent the exploitation of day laborers, a minimum wage must be established. We are taking two approaches to this: firstly, salaries are continuously increased in jobs that are linked to the autonomous administration and women’s economy. On the other hand, we fight against low wages in the private sector.

The private sector is the real problem. It is very difficult to solve the economic problems of women who have become refugees in their own country within a short time. At this point, the significance of Abdullah Öcalan’s statement that both war and peace are women’s problems becomes apparent in a burning way. In this respect, the end of the occupation and the return home are also an economic event.

A conference on women’s economics was held recently. What topics were discussed and what decisions were made?

There is still a negative attitude in society toward the women’s economy. Another problem is the fact that we have not yet sufficiently succeeded in systematizing the work of women. The development of a system of women’s economy is our primary goal. Among other things, it was decided that the women’s economy should have its own budget within the autonomous administration. It is not enough to have laws against the exploitation of women’s labor. This problem must be pursued and fought against. In addition, an institute should be established to professionalize the women’s economy.

Most important was the discussion about the gender struggle against the tendency to base economic development on a patriarchal culture. This content-related discussion and the decision-making process have created a positive mood that is important for our further struggle.