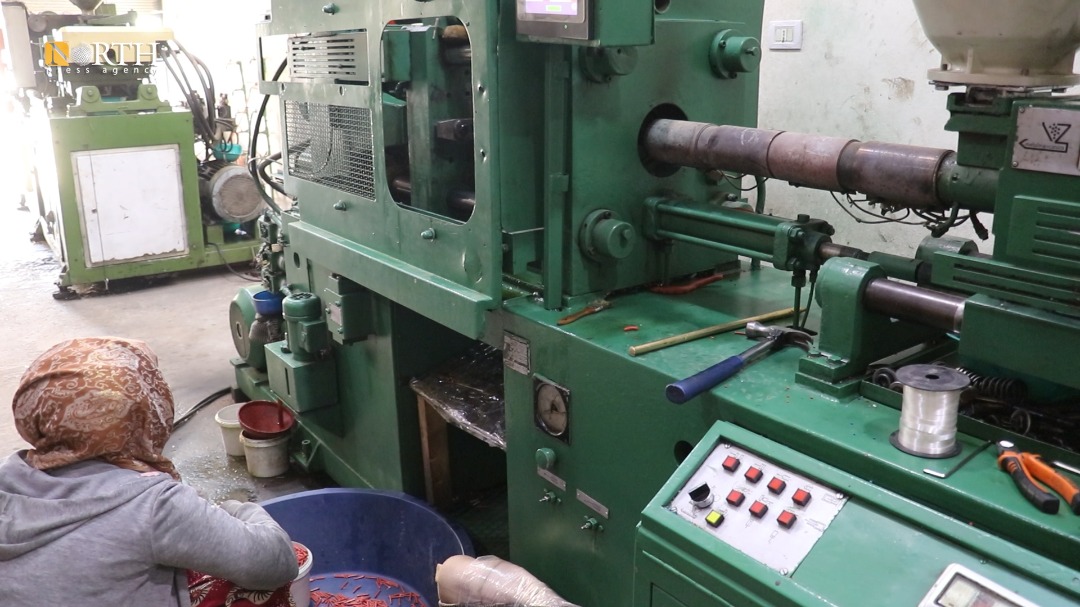 Aya Plastic Factory, in the town of Girke Lege in northeastern Syria, seeks to develop its production, especially of household electrical wiring supplies.

Over the past four years, the factory has continued to produce sporadically and by request. “I opened the Aya plastic factory four years ago,” factory owner Jihad Musa told North Press.

The factory contains two machines that have not operated yet due to the lack of conditions and requirements for their work, while other machines operate at low production capacity to secure some household electrical wiring supplies.

“These machines are Italian-made and expensive; I brought them from Damascus after a long wait,” Musa told North Press.

The factory owner hasn’t operated all the machines yet, which deprives him of additional profits and also deprives the region of local products at more affordable prices than the imported ones, in addition to providing new job opportunities.

The main difficulties that the factory faces are procuring raw materials and transportation, shipment, licensing, and taxes, which encouraged Musa to start his own project. “At the beginning of the Syrian crisis we faced difficulty in shipping and importing the materials to the region. I thought of starting my own project.”

“Our production can cover the entire region. We produce 2,000 pieces per day; it could be increased and developed if I operated all the machines,” Musa further explained.

Musa depends on himself to supervise the work of the machines, while two female workers do the sorting, packing, and counting before the products are distributed in the markets.

One of the two workers, who are two sisters from the town’s countryside, said that they are receiving acceptable wages for their work, while they aspire to master the supervision and production of the machines.

Musa faces many difficulties in the absence of an official body to market the production and supply the factory with the necessary raw materials and dyes that are purchased from the Kurdistan Region of Iraq, which requires great time and effort.

“If these things were available for us, we would not need to ship them from other governorates, as all building electrical systems would be available,” Musa explained.

Diljar Hassan, the owner of an electrical store in the town of Girke Lege, said, “I was very relieved after the opening of the plastic factory; we now have a lot of goods.”

“We alleviated the trouble of shipping the goods from Damascus and Aleppo; we don’t have to pay taxes and shipping costs,” he added.

“The shopkeepers and workers in electrical installations are ready to buy local products even if prices are comparable to imported materials, but what matters is the quality of the product,” Hassan said.

Hassan hopes to develop the production of the factory in his town and advance marketing after his products reached the cities of Qamishli, Hasakah, and Deir ez-Zor.

Hassan believes that the institutions concerned with industrial production in the region should encourage these facilities, because they mean a lot to the region’s residents and merchants.