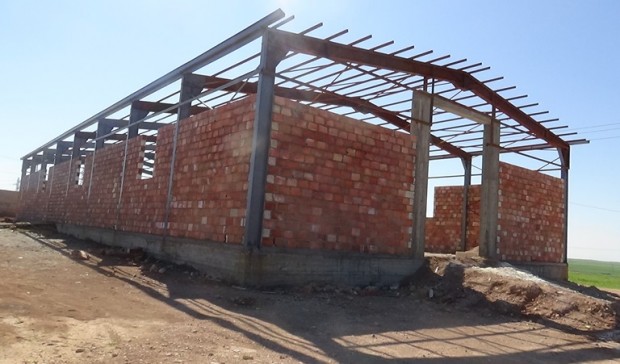 The Economic Council of Dirbêsiyê‎ [Derbesiye / Al-Darbasiyah] succeeded in making several socio-economic achievements in less than one year.

The Economic Council of Derbesiye that was formed more than a year ago has managed to develop community economics in the region, and has made six economic achievements to date.

The Economic Council, which consists of 51 members, was formed by the Movement for a Democratic Society [TEV-DEM], that also formed many economic centres in Derbesiye. One of them was The Centre for Economic Development. During a meeting attended by the participants in the co-op on 19th October, 2015, the first agricultural co-op was formed as a unique experiment in the Jazira Canton [Cizîrê‎ / Cezîre]. It has 291 members in Derbesiye, and the price for each share was 15,000 Syrian Pounds. In six months, each member received 280,000 SP.

After the success of the experiment of the Agricultural Committee in Derbesiye, The Economic Council of Derbesiye made a proposal in a meeting on 15th December, 2015 to found a water co-operative with the name Roj Av. More that 950 people participated, 130,000 SP was collected from each member to build a water purification plant south of Derbesiye. The plant is expected to purify about 100,000 litres of water once it begins operations.

The building was planned to be ready in March, but was delayed because of lack of supplies due to the closure of the Simalka border crossing between Rojava and Bashur [South Kurdistan / North Iraq] by the Kurdish Democratic Party [the ruling party of S. Kurdistan]. The administrator Khaled Shekho confirmed that they will continue bringing all the supplies necessary to make the project succeed as planned, and complete the work as soon as possible.
A third economic co-operative society formed was the Trade Co-operative, on 8th December, 2015. It saw a large turnout by the people around Derbesiye with 3,630 participants, at 15,000 SP per share. The co-op will work to build many shops and a mall with the name Hevgirtin in the consumer co-operative society in Derbesiye, to sell basic food products like oil, tea and sugar, in addition to other food products, at a wholesale price.

The 4th economic co-operative society that was formed by the Economic Council on 25th November, 2015 was the oil factory in Qantar village, which is 10km away from Derbesiye on the road to Hasakah. It has 120 members at 50,000 SP per share. The co-op started building the factory, and once finished it will begin cultivating plantations of crops to extract oil from, such as corn, cotton and sunflower. The factory is expected to extract 50 tons of oil on a daily basis.

The Economic Council also formed a housing co-operative with more than 70 members to buy 37 acres of land west of Derbesiye on the road to Qamishlo [Qamishli / Al-Qamishli]. Every member paid 100,000 SYP as a down payment to construct 144 apartments, in addition to building many shops in a mall with a garden situated inside. Every member is to pay 300,000 every six months until all the buildings are erected. An administrator in the co-op, Asad Jumaah, said that 24 apartments will be ready before next summer and they will continue working until they finish the whole plan of the co-op.

A petrol station was also established with the name Kobani Station, with 100 members. Oil will be distributed among 40 villages from the Shehid Jihad line. It will allocate 7% of the oil to the communal purse to satisfy the needs of the village and provide assistance to people in need.

Other co-ops were formed in some villages around Derbesiye by the management of the communes of those villages in coordination with the Economic Council and the Centre for Economic Development. One of them is collectively buying motors and machines to be used by everyone in the village.

Khaled Sheikho, an administrator in the Centre for Economic Development, said that the aim of forming economic co-operative societies is to raise the spirit of co-operation in society, develop the economy of the region, accomplish equity among all segments of society and find the best solutions to curb inflation, asking every one to participate in the co-operatives.