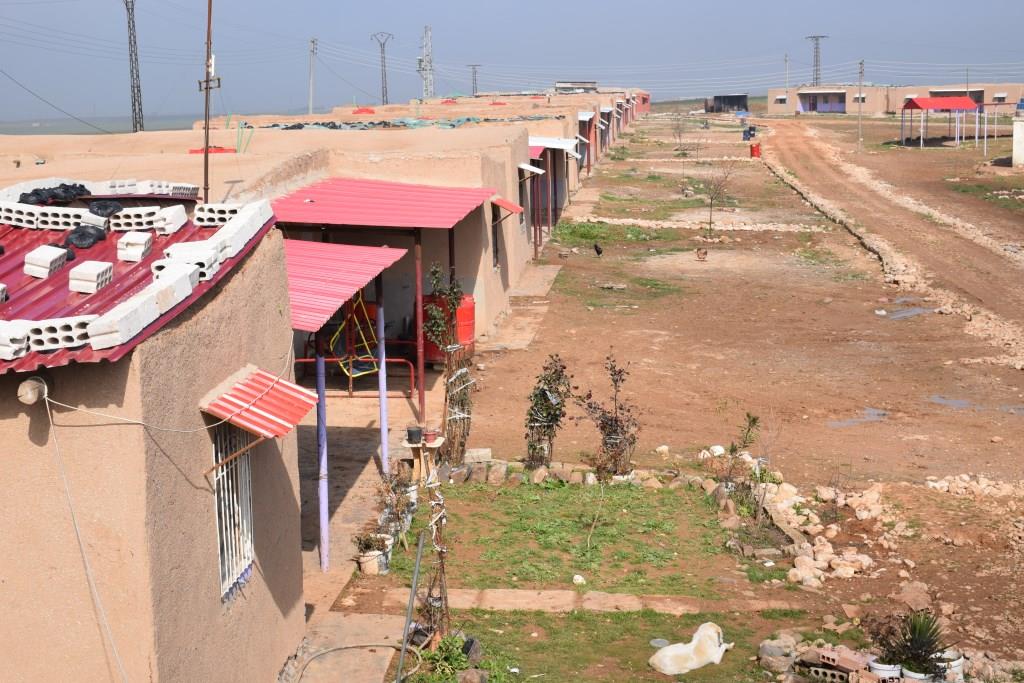 Jin War, the home of women from all over the world, where all components [from different ethnic backgrounds] women from northeastern Syria, the north and south of Kurdistan and a number of countries of the world came together to establish a common life without borders, a normal life, rich in science and the privacy of women. The village has accomplished many projects in a year, as well as a number of projects have been put into the future action plan.

“Jin War” means the women home. It is one of the gains of [the] Rojava revolution, [which is] known as [a] Women’s Revolution. Jin War was founded on the ideas of leader Abdullah Ocalan, on the basis of a free common life, environmental economy, healthy society and participatory life. It took its symbol from the hermel plant, which is a sign of goodness and blessing.

The village is located west of al-Darbasiya district in Al Hasakeh canton, in a fertile area.

Founded on December 6, 2018, the village [has now] completed its second year and entered its third one, where women seek to develop the village and complete new projects each year.

Jin War is home to all the women of the world

Shirin heard about the village and came to live there, and like Shirin, Zainab, from northern Kurdistan, went to the village of Jin War to get rid of masculine injustice.

International women who are fed up with the capitalist system and, taking [the] Rojava revolution as a model, [move to Jinwar, which] becomes home to all the women of the world.

“Although our languages are different, pains are common and our stories are similar. We understand each other as women. We learn each other’s languages. We are here to manage ourselves and re-understand the history of women that has been wrongly written and re-correct it.” Women appealed to all women to come to the village and identify themselves.

A year of activities

Women have established participatory fields and orchards, strengthened their environmental economy, planted wheat, and made bulgur from the same wheat.

They grow many vegetables and many fruit trees such as lemons, oranges, pomegranates, apricots, olives, etc.

Women raise many types of birds and livestock, to secure milk and eggs.

Over the past year, many delegations from around the world and the Middle East and Europe visited the village. They were impressed by [their] experience.

Women have set their sights on many projects with the aim of developing the village.

This year, they seek to achieve full economic self-sufficiency, continue wheat production, increase the number of livestock in the village and increase natural production.

Growing more vegetables to  meet the village’s needs, as well as increasing the number of fruit trees.

The future plans also include the maintenance [of] Mother Aweesh School, construction of [a] children’s playground, and [the] opening [of] a cafeteria for rest and recreation.

One of the projects includes [a] solar electricity production project, especially since some houses in the village have already used solar energy to generate electricity.

One of the projects women are seeking to develop this year is the health center (Shifa Jin) project, that is production of medicines from natural herbs and plants. Women are now receiving education about women’s bodies and natural medicines.

On this subject, we met with the village doctor of Jin-War, Berevan Carnas, who came to the village about a month ago.

“We are seeking to establish a health center called Shifa Jin in the village to provide medical services to the women and children of the village, as well as to the people of nearby villages,” Berevan said.

We have had a plan to open this health center since constructing Jin War, to enable women to learn about health and to take care of their own health, because the goal of the Shifa Jin project is to use natural methods and medicines in treatment.

What does natural treatment mean?

“This does not mean refraining from using chemical drugs, because there are some diseases that particularly need to resort to chemical drugs, but it is important to understand the nature of these drugs, and to achieve self-medication. If we cannot free up, we will not be able to solve health problems as well.”

“We are seeking research and study to identify and document the pathological problems in the village, and to restore and document the traditional sciences of women in the field of medicine,” she said.

We will write down this information. We will practice medicine on natural environmental grounds, on the basis of women’s emancipation and self-[protection]. We will try to organize (Shifa Jin) and start working as soon as possible, we are now organising a health awareness course for the women of the village, and the staff of Shifa Jin are also receiving training.”

“Jin War is a beautiful home, and I’m happy to be working here,” Berevan said.

Shifa Jin was inaugurated during a ceremony on March 4th.