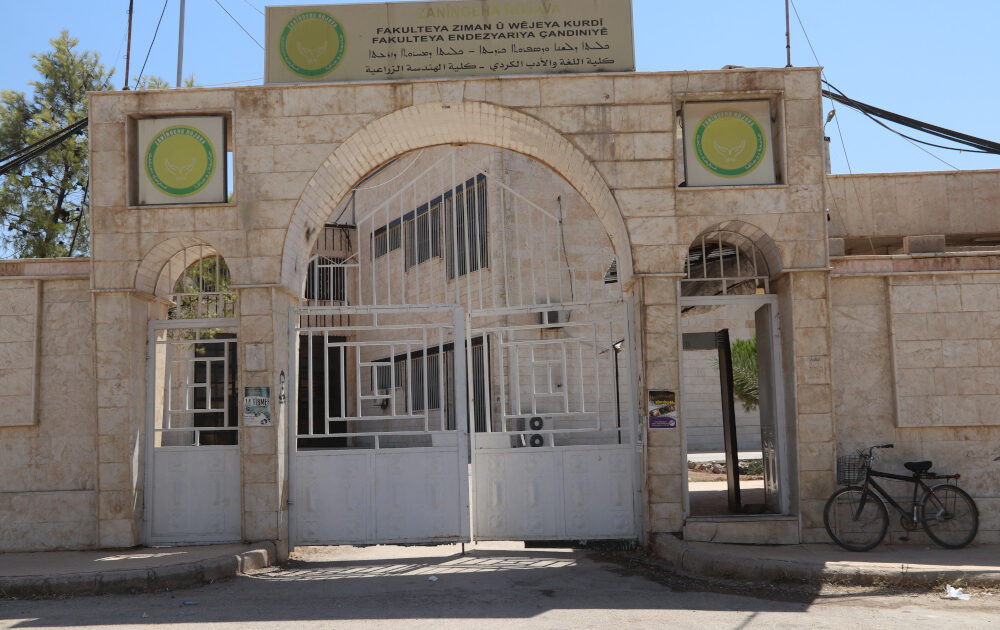 The University of Rojava recently launched an appeal for support to universities and academics around the world. RIC interviewed Gulistan Sido, responsible for external relations at the University of Rojava, to learn more about its history, its future projects and about the challenges the university is currently facing.

Could you introduce yourself?

My name is Gulistan Sido. I am originally from Afrin. I was born in Aleppo, studied there and later also in France. When the events started in Syria in 2011, I was working in Kurdish language institutes. When the Rojava revolution began on 19 July 2012 in Kobane, it brought about changes in many areas. It was a social revolution, a women’s revolution but also a language revolution.

In other parts of Syria, the revolution became militarised and it turned into chaos, as it still is today, resulting in the destruction of the main infrastructures of the country. During this time I worked in the canton of Afrin and we founded the first institute of Kurdish language and literature, Viyan Amara, in 2013. The Turkish invasion forced us to leave the region, and I joined the University of Rojava in Qamişlo, where I am responsible for international relations.

Can you tell us the history of the University of Rojava here in Qamişlo?

The University of Rojava in Qamişlo was founded in 2016. This is the second experience in higher education [since the beginning of the revolution] because there was a first university founded in Afrin in 2015. We started with few disciplines (initially mainly Kurdish language and literature, agriculture and petro-chemistry). Gradually we added other subjects and the university expanded. Soon we will open a department of Arabic language and literature. We have written regulations and an internal charter specifying the foundations of our education system, and the values upon which it is grounded. We consider that our university is the fruit of the revolution, so we cannot separate its foundation from the revolutionary process that began here. We seek to improve our educational system also by contacting other universities to find out how they function, but we don’t want to separate ourselves from our local culture, which is very important to us.

Gradually we added other subjects and the university expanded. Soon we will open a department of Arabic language and literature.

What kind of difficulties did you encounter and how is the current situation?

Our working conditions have been very difficult, mainly because of the war and the inherent security problems, but we have made progress little by little. We took in students from Afrin who had not been able to finish their studies because of the invasion. We take in students from all the regions of the autonomous administration of Northeast Syria. So far, more than 1500 students have been able to come here since the university has been founded. The figures for the number of registered students change every year, also depending on the situation. Unfortunately, when there are attacks, many students leave the university. It is difficult for them to continue their studies under these conditions. At the moment there are about 25O graduates, mainly in Jineolojî, agriculture and Kurdish literature. In the future, we are thinking of opening a post-graduate course in master’s and doctorate degrees. For the moment, we are confronted with a lack of specialists who could teach. Because of the war, professors and graduates of higher education have left the country.

Unfortunately, when there are attacks, many students leave the university. It is difficult for them to continue their studies under these conditions. Because of the war, professors and graduates also have left the country.

So we are doing higher education with our current possibilities and with people who studied in Damascus and Aleppo. We are trying to bring in teachers because there is a real shortage at this level.

How is the University of Rojava organized?

As in every institution created in Rojava after the beginning of the Revolution, we operate with different councils and committees. We also hold congresses and general assemblies every semester, in which we debate the main orientations and our teaching methods. We take advantage of these moments to evaluate our education system.

We have an autonomous council of women working at the university. We have our separate set of procedures and a council in which we make decisions about the things that concern us and discuss our problems in the absence of men. There is also an autonomous students council because we think it is necessary to give importance to their role in the decision making process. Each department has student representatives who sit on the councils with the professors. Even if we still have difficulties and shortcomings at the academic level, we believe in our project. We believe that it is possible to change the mentality of each generation. After only 4 years of existence we have a lot of challenges ahead of us.

What is the place of the different languages spoken in Rojava in the higher education system?

In Rojava there are three main languages: Arabic, Kurdish and Assyrian. In the social contract, we have specified that each ethnic group can learn in their mother tongue. From primary school onwards, we give priority to languages. Every child learns in their mother tongue but there are also classes so they can learn the languages of others. All this was not allowed in the regime’s education system.

At the moment at the university we have two languages, Arabic and Kurdish. But we want to make room for all the others. And of course the doors are open for Assyrian friends if they want to open a department of language and literature. We think of everyone, the doors are open to everyone. The important thing is to give everyone the right to study in the language they want.

This is a very rich region [in cultures and languages] and we need to create an institute to collect all this diversity. We are thinking of setting up a multilingual and multicultural system that represents the mosaic of our region.

We are also going to open a local folklore institute dedicated to collecting texts, tales, oral literature and songs for each local language. This is a very rich region and we need to create an institute to collect all this diversity. We are thinking of setting up a multilingual and multicultural system that represents the mosaic of our region. Here we are very connected to each other. We have lived together for several thousand years, we must not neglect this richness. It is a cultural heritage that must be preserved.

What are your relations with other Syrian universities?

In Syria we do not have any links with the universities of Aleppo and Damascus, because at the political level the regime does not recognise our administration. The Baath party still keeps its mentality, based on repression and denial of others; it admits only one nation, only one flag, only one language… Our paradigm is completely different so it is complicated to establish relations with them. Our model is designed to meet the needs of society. The universities of Damascus and Aleppo are recognised but, in order to establish relations with us, they depend on the political status of this region. On our side we have no administrative recognition from the Syrian state. This explains why we do not have relations with other Syrian universities. It is not the same conception of the education system or of diversity. We accept others, but they do not accept us.

Does this situation lead you to look further, to see beyond Syria’s territorial limits?

We are trying to cross borders as an educational institution. To open doors and find new paths. We want to build relationships with universities that share our values, values of emancipation such as women’s liberation, democracy, multiculturalism, secular education. These core values that we carry in our project, with which we go knocking on the doors of other universities in the world. The Rojava Revolution has been known for a few years now because our region has made itself famous through the resistance it put up against ISIS. But it is also time to present the political experience of Rojava in all its aspects and not only its military side. Social revolution and women’s liberation are essential aspects, as is our education system.

Even if the world situation is complicated because of Covid-19, what is very important for us is to see that there is this willingness to help us. This gives us great strength and encourages us to persevere.

You recently launched an appeal for support at the international level, can you tell us more about it?

On 19 July 2020, on the 8th anniversary of the Rojava Revolution, we launched a major international solidarity campaign. Our appeal is addressed to all the people in the academic world who could help us. Supporting the resistance in Rojava also implies supporting education. It’s been a month since we launched this campaign and we have already received a very important support. There is a very strong international solidarity, everyone wants to help us. Even if the world situation is complicated because of Covid-19, what is very important for us is to see that there is this willingness to help us. This gives us great strength and encourages us to persevere. This is why I take advantage of this interview to pass on my thanks to everyone.

What kind of international support did you receive?

In our call, we mention several ways others can help us. The first thing we are working on is a large collection of books and scientific articles because we need references in our library. The main problem we encounter in this field is to get all these books to come here, because we have received many donations from all over the world.

All types of content are welcome. Many academics offer to give lectures and organise seminars. We are also in contact with working groups to receive academic advice and to improve our education system. We are looking for special support in the fields of social sciences and gender studies, as we will soon be opening an institute to teach these disciplines. There is a major challenge facing us in relation to languages. Even though our students are learning foreign languages, we need translators to make certain educational contents more accessible. To organise the next steps, we are going to launch working committees for the different forms of solidarity, in order to coordinate aid mechanisms. So we will soon be able to give more details about the possibilities of helping us.