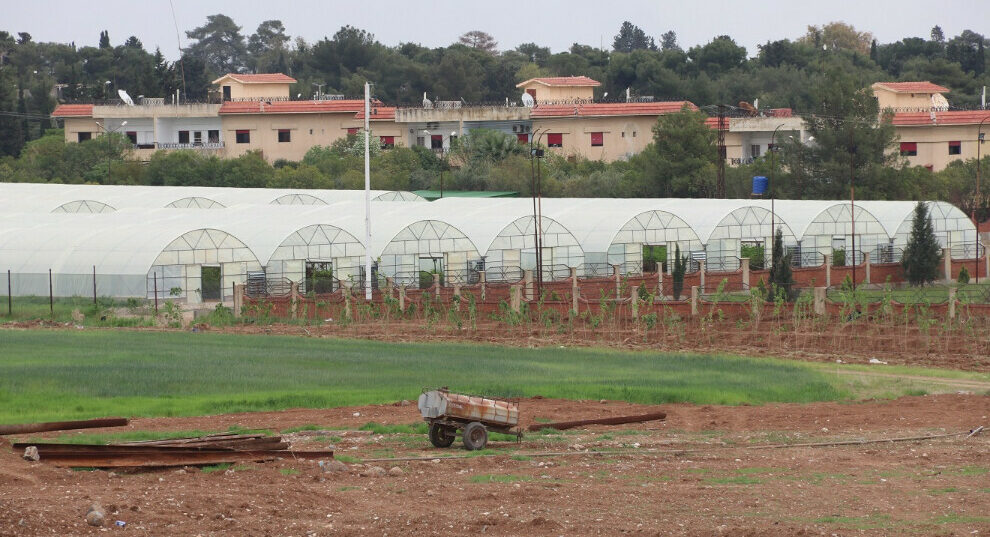 Greenhouse gardens are being built in the town of Rimêlan in Girkê Legê with the support of the Economy and Agriculture Committees. This project is of great importance at a time when the Damascus government, Turkey and KDP are imposing an embargo via the border gates in the region.

Til Kocher border gate, which is very important for the region, has also been closed since 2019 as a result of Russia’s veto. In short, the efforts to stifle the region’s economy with embargoes during the initial years of the revolution makes the economic production projects an urgent issue.

“LOTS OF VEGETABLES ARE GROWING”

The Economic Committee first opened 9 greenhouses on 12 dunams [decares] in Rimelan in 2016. Cucumbers, tomatoes, eggplants, peppers and many other vegetables have been grown as part of the project which was initiated to meet the needs of the citizens of the region. Over time, the number of greenhouses reached 32. According to the project managers, 450 thousand people enjoy consuming vegetables. Parsley, green beans and mint will now be grown in 5 new greenhouses.

Greenhouses have different features. Greenhouses built in W shape are designed to resist wind and rain. There are heating and cooling mechanisms in winter and summer to grow vegetables in all seasons.

Agricultural Engineer Hemide Silêman spoke about the project and said, “The greenhouse has advanced technology. It can control hot and cold weather. It is irrigated with the drip system.”

“VEGETABLES CULTIVATED ACCORDING TO NEEDS”

Agricultural Engineer Hesen Omer said, “I started working here after I graduated from university. We get more yield from the soil through these methods. Vegetables are cultivated based on people’s needs. Cucumbers, tomatoes, peppers and eggplants are more popular.”

Agricultural Engineer Zinar Hesen said, “Greenhouses can produce continuously but agricultural pesticides should be used for the soil and particular attention should be paid to maggots. Each greenhouse is 51 meters long and 9.6 meters wide. Its height is 4.5 meters. Each of them produces 50 tons of vegetables a year. The products procured here are sold in various places from Girkê Legê to Dêrik.”

Approximately 100 people work in these greenhouses. 10 separate greenhouses will be soon built on 10 dunams in Hesekê. Another project is being implemented in Tirbespî with the support of the Women’s Economy Committee.