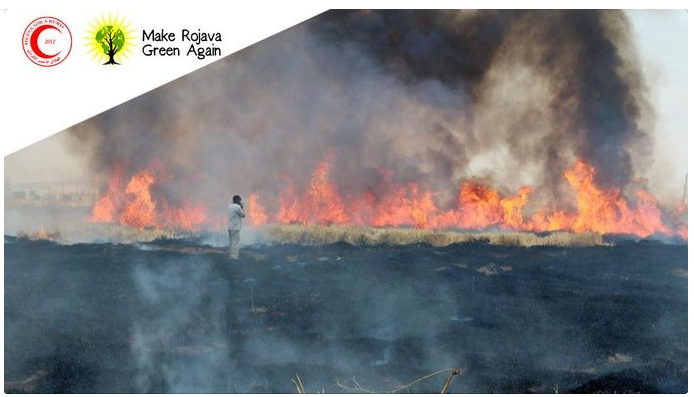 Since 2012, a new form of self-administered society, based on the values of women’s liberation, democracy and ecology is put in practice in Northern Syria in the autonomous region of Rojava (officially called Democratic Federation of North and Eastern Syria). This example of a society is a great source of inspiration and hope in this region, which has been through numerous wars in recent history. More than that, Rojava shows that another type of society, an other way of living or even that another world is possible!

This social revolution faced a lot of threats from the beginning on: the invasion of IS (islamic state) in 2014, the continuous pressure of the hostile neighboring states, the invasion of Rovaja’s Afrin canton by Turkey in 2017, the embargo, etc. But thanks to the heroic resistance of Rojava’s people and their incredible willpower on the ground, ISIS has been defeated and life is blossoming again despite all aggression.

But this summer, the people of Rojava received a terrible new blow. Sleeping cells of jihadist gangs started to set fire to its first source of food and income: the wheat and barley fields that cover most of Rojava’s surface. Because of this, more than 40,000 hectares of cereals were lost, huge natural areas got also devastated and the estimated money loss reaches more than 33,000,000 dollars! This is a very serious attack to all nature and life in the region both economically and ecologically. Today, Rojava needs our support more than ever!

The consequences of those fires are very serious. The loss of thousands of tonnes of yield is impacting not only the farmers, but the society as a whole, putting a threat to the development of its broader project. Through this fund raising, we want to bring a direct help to the farmers, because they are the first impacted by this disaster. Also, as they shape the environment, they are also the first ecological architects of the region and their work is priceless. But in a broader sense, we aim at supporting all people of Northern Syria. By giving money, we wish to participate to their struggle to build a democratic, feminist and ecological society. What is happening in Rojava is about more than just protecting nature by limiting the damage made to it; it is about reestablishing the balance between people and nature.

For all those reasons, our support is needed today.

How much do we want to gather:

As it is said above, the sums lost are colossal and we don’t pretend to be able to cover them all. But we are not alone, both the self-administration of Rojava and Heyva Sor A Kurd (the Kurdish Red Crescent) stated they would do their best to cover part of the losses. So all together, we can succeed in our work! And at the same time, keep in mind that every donation, is of great help: the farmers need money, but above that, they also need mental support. Of course the greater the amount of money, the greater economical help. But the number of people donating is also showing international support. Let’s show the people of Rojava that we are behind them!

Where will the money go:

As part of the broader “Make Rojava Green Again” campaign, this fund raising is managed only by volunteers. All the money will go directly to the farmers through the local agricultural department of the self-administration of Rojava.

You can donate here: https://chuffed.org/project/fromasheswerose