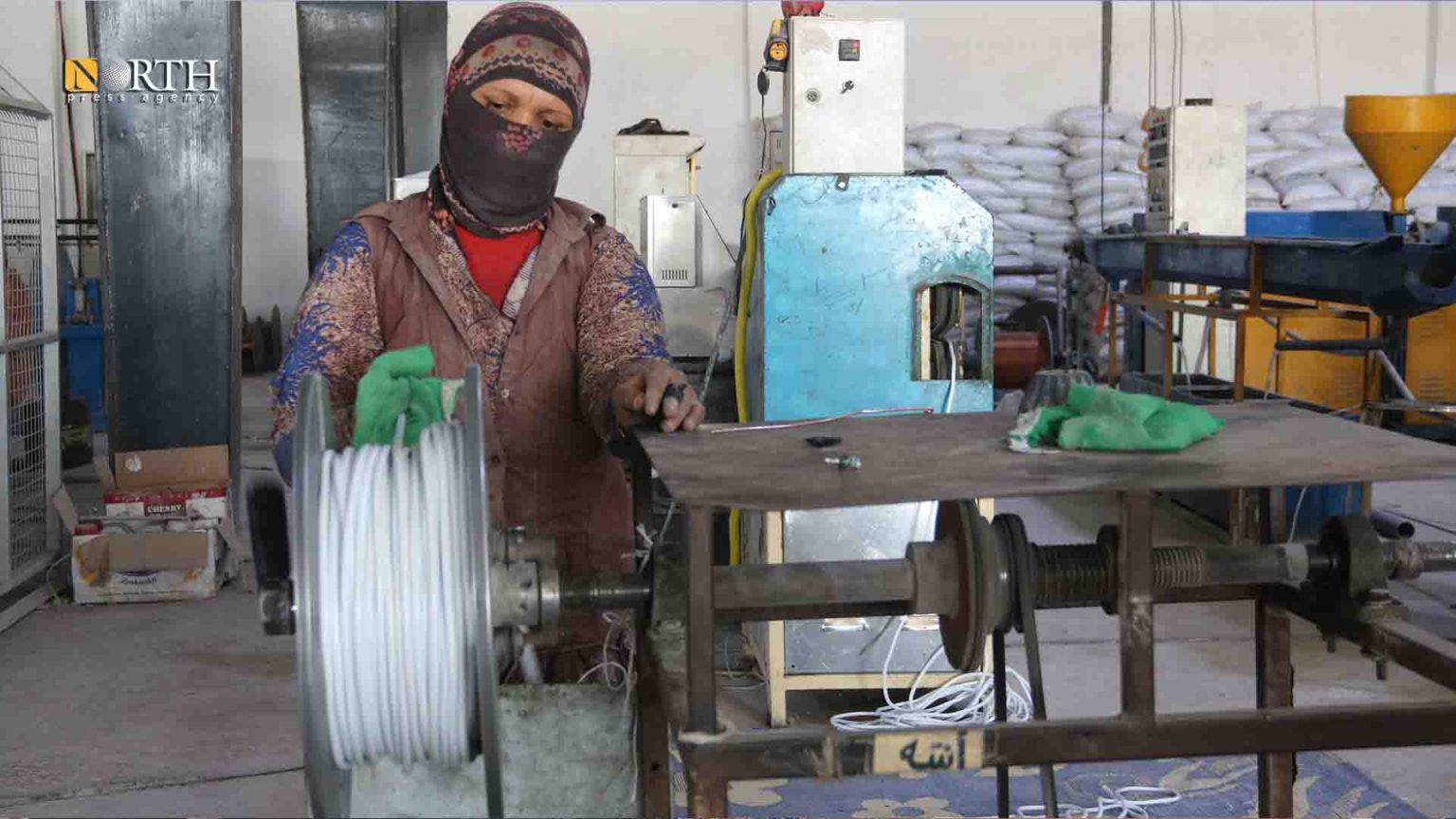 Regions of north east Syria are considered relatively stable, and some industrial factories have been moved or opened there, especially after the Syrian crisis, which provided job opportunities for many displaced and original families.

Wajed Barho, from Derik north east Syria, is working accurately and in harmony with the machines and with other women employees in a cables company in Derik.

The factory partially provides the markets of the Autonomous Administration in North East Syria (AANES) with their needs, as well as securing job opportunities for people.

“The work is comfortable, I have been working in cable manufacturing for one year,” Barho told North Press.

“I urge for the opening of other factories in the area amid the deteriorating life conditions, because we should work in order to live,” she added.

Imad Naasani, a displaced person from Aleppo who has been living in Derik with his wife and two children for four years, said that he was a copper cabling and electrical wires technician in the factory.

“Such projects secure job opportunities for displaced people who are abundant in the area.” Naasani told North Press.

About 40 people work at the factory, including 25 men and women who work inside the factory, while others work outside in distributing the production in local markets.

In developing the factory we needed to attract more experienced manpower [workers], especially those with external experience, to get the benefit of their experience and encourage them to stay, Naasani stated.

The owner of the factory transferred the factory from Aleppo to Derik in 2016 considering it a good area, and the most stable in Syria.

Five years after the factory was opened, the crisis began, and due to the bad conditions they experienced, they moved it to Derik, Youssef Soyyd the owner of the factory told North Press.

“We produce electrical cables to secure the market’s need, and we sell the goods in AANES including Manbij, Raqqa, Kobani, Hasakah, Qamishli, and Derik,” Soyyd added.

There are plans to expand the factory work and add new types of cables, according to Soyyd.

He confirmed that the factory would produce within a month the electric hoses that they were late in producing after they were unable to import industrial machines that they bought from Turkey.

The machines were seized at Beirut port when trying to enter them from there, but those in charge of the factory were able to lift the seizure after submitting the necessary official documents.

Additionally, diesel generators provide the factory with electricity during the cut off periods.

Safwan Abu Jar, the maintenance and the Control engineer from Aleppo, said that the factory fulfilled economic and social production. “Half the workers are women, we face difficulties to train them in order to let them have a basic role in the community,” he said.

“We are trying to establish a beginner industrialized society in the area, according to the organizational, institutional, financial and administrative aspects.” he added.

“The machines are made in China; however, cables that we produce compete with those that are made in Europe.”