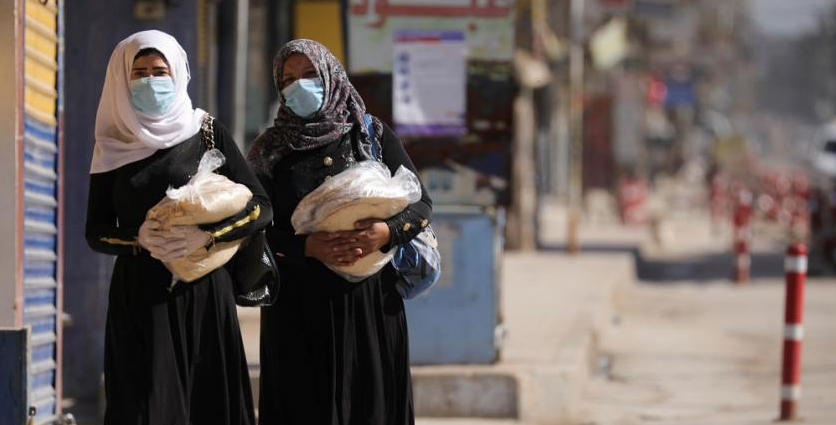 Worldwide, the coronavirus has triggered debates about the nature of our shared responsibilities, not only in individual cities or countries, but across borders of nationality, language, and belief. Together we measure profit against solidarity, liberty against duty, and even the spiritual against the physical.

Ironically, it is the most powerful nations in the world, despite their vast and globally networked resources, that seem to be paralyzed by this moral burden. The United States has struggled to overcome policy makers’ deep ideological commitment to “rugged individualism” and the sanctity of the “free market,” leaving its citizens struggling to navigate a byzantine system of private healthcare and misappropriated subsidies. Meanwhile, it is among the world’s less powerful societies that we can see a paradigm of radical democracy and a serious attempt at an internationalist and social response to the virus.

The Autonomous Administration of North and East Syria (AANES) is one such example of this solidarity ethos, seeking to cooperate both within and across its borders, even amidst the many dangers plaguing Syria.

In the United States, we have seen what pandemic policies look like that emphasize competition, individualism, and the inviolability of profit. Minority and working-class communities have been devastated at an astonishingly disproportionate rate – Black and African-Americans in New York City have died at over twice the rate of white residents.

The reasons for this racial disparity are clear, with even the CDC (Center for Disease Control) pointing to: residential segregation, a lack of groceries and medical centers in poor communities, over-representation in prisons, the precarity of low-waged but “essential” workers, and lack of paid sick leave and insurance.

States have been forced to “outbid” each other for essential medical equipment, sending lifesaving supplies to the richest of states (or those most willing to drive themselves further into debt). Price gouging has been rampant, simultaneous with historically high firings and layoffs.

None of these conditions have anything to do with the pandemic – they existed long before it and are the banal, quotidian (and yet still horrific) details of life in an avowedly capitalist, “by your own bootstraps” society. The tendency is to view poverty as evidence of an individual’s personal, moral failing, allowing us to look away from or absolve ourselves of responsibility for others’ suffering. Of course, it is these same people, the poor and working class, who are on the frontlines of the pandemic – risking their lives for us all.

This is the coronavirus policy of, to put it in a single word, an antisocial system. Unfortunately, this antisocial system is not limited to one country and has become the broader geopolitical paradigm, encouraging nation-states to treat each other as rivals in the rush for medical supplies, vaccines, research, and ultimately economic advantage.

But as we’ve said this is not the only path available. Counter currents always exist and many have chosen to embrace an ethic of solidarity, cooperation, and egalitarianism in response to the pandemic.

In the AANES they have emphasized socialist (democratic, solidarity-based) policies that get down to the roots of the crisis. The administration waived sanitation, water and electricity bills across their territory for all residents for two months. Local, directly democratic councils provided resources to deliver food and fuel to their neighbors in need. Lockdowns around the world have posed a particular challenge to societies with tight kinship networks and close, communal living — leading to surges in gender-based violence and cascading medical effects like an increase in pregnancy complications.

The AANES has unique infrastructure to deal with the fallout, with long-established Women’s Committees operating at all political levels of the administration and Peace and Consensus committees available to mediate disputes and to intervene positively in family conflict. This democratic approach, which empowers society to act “from below,” endeavors to make sure that no one falls through the cracks. Political power rooted at the local level means that, through self-management, administrators know the plights and needs of their neighbors. They are conscious of their neighbors as actual human beings and not just as statistics to be weighed and measured.

Embracing this same, bottom-up solidarity ethos, “mutual-aid” organizations have flourished across the world in response to the pandemic – self-organizing to provide essential services and supplies to their communities while pressuring policymakers. Even in the United States, such initiatives have taken hold across the country where government has been absent, unwilling to help, or indifferent in its response. Across the world, partisans of democracy like the AANES are inspiring others to model alternatives not only to the current crisis, but also to systems of inequality writ large.

Still, localized solutions are only part of the equation. The coronavirus has demonstrated that our collective health and wellbeing is also tied to a world community – across borders and political divisions. Recognizing the interconnectedness of our very health and prosperity, a just and equitable rebuilding will need to happen ultimately on the global level, with an internationalist perspective.

The AANES is a case in point, confronted with a host of problems that demand action from the international community. The Syrian state largely controls coronavirus testing in the country and refuses to transfer medical resources to the AANES region, which has received a scant few testing machines from its neighbors in Iraq. Turkey is taking advantage of the crisis to make further inroads in its occupation, going so far to attack water supplies in the AANES – making even the most basic hygiene in some areas, not to mention the provisioning of food, a difficult challenge.

Most glaringly, the AANES is host to massive ISIS prisoner camps, which are a potential hotbed of infection. Despite the self-defense forces of the AANES serving a key role in the coalition fight against ISIS, its international partners have refused to repatriate, adequately fund, or otherwise help to manage prisoners. This has left the US’s closest ally in Syria “holding the bag” and putting their very lives at risk during the pandemic.

The coronavirus has shown that no person, and no nation, is an island. If we are serious about embracing the notion of solidarity, it must not be limited to the people within our national borders. As a “world leader,” the United States should encourage and nurture these values everywhere they are expressed, including the AANES. Policymakers might start by sanctioning Turkey for its occupation and economic warfare in North and East Syria by separating the AANES from poorly-directed Syrian sanctions and by extending financial and medical aid to the North and East Syria. Beyond material aid, a great deal could be accomplished by simply taking a just stance on the Syrian conflict, applying diplomatic pressure on the Syrian Government to allow COVID-19 testing in North and East Syria, the transfer of supplies, and the full participation of the AANES in peace talks.

If we as a country and a global community are to make something out of the tragedy of this pandemic, it is important that we remember that crisis may shine a light, but it only reveals what was already lurking below the surface. We shouldn’t treat this moment as an aberration, but as a revelation. To seize the moment and make a change requires not only empowering the disempowered at home, but also rectifying the policies that have hurt those seeking a more just and equal world abroad. The AANES, struck by war, pandemic, ethnic discrimination, and economic deprivation, is one such society that is miraculously building hope amidst cynicism and great struggle. We owe them a debt of gratitude.

We can choose to be humble and accept one more gift from our allies in North and East Syria. We can embrace their example and go forward in a spirit of solidarity and cooperation, turning tragedy into a truly collective transformation.