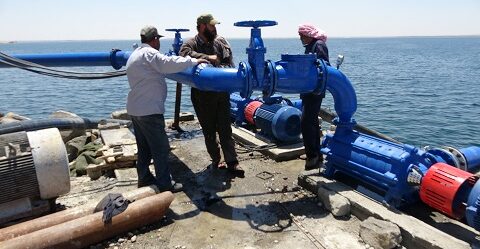 Jarniah Water Unit in the countryside of Tabqa has restored two pumps in the Tawi water station to work after they were out of service for more than 4 months as a result of the Turkish occupation lowering the flow the Euphrates water into the Syrian territories.

The people residing in the Euphrates basin area suffer from Turkey’s continued blocking of the Euphrates River, which affects various areas of life, especially the provision of drinking water.

The lowering of the Euphrates River has caused more than 30 water purification plants to get out service, as the river’s water continues to recede, thus depriving millions of people of drinking water, especially with the advent of summer.

Jarniah Water Unit in the countryside of Tabqa, made earlier attempts to restore two pumps in Tawi drinking water station to work after a four-month hiatus, which caused a major crisis for the residents.

The locals suffered from a lack of water as they transported it by tankers and extended additional pipes for the old ones, until Jarniah Water Unit took the necessary measures.

In this context, Mahmoud Al-Kalah, the Co-chair of Jarniah Water Unit said, “We are continuing to ease the burden on the people and secure drinking water through the presence of alternative solutions.”

Al-Kalah added, “We have installed two horizontal pumps to replace the vertical pumps, measuring 100 horsepower, raising 140 and maximizing 260 intensity, in the Tawi pumps in Jarniah region.”

Al-Kalah pointed out, “The pumps irrigate about 15 to 18 villages of Jarniah, except for some hamlets scattered between these villages.

It is worth mentioning that Jarniah Water Unit is working on the Shams El-Din pump, which is the main source in the region and irrigates about 165 villages spread over more than 75 km to re-operate, too.