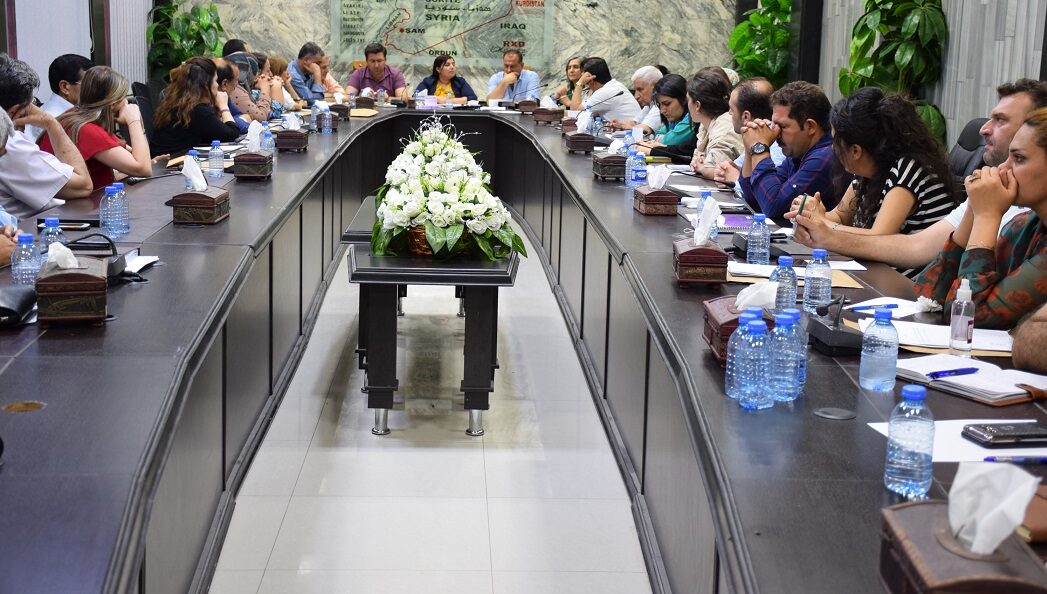 Qamishlo residents expressed their satisfaction with the measures of the Autonomous Administration with regard to the living reality, which is considered a temporary remedy to contain the economic crisis in the regions of northeast of Syria. The economist Aladdin Farhan described these measures as “positive”, indicating that these steps will be a success by studying them more deeply.

The Presidential Body of the Autonomous Administration of North and East of Syria, AANES, held a meeting with the Executive Council of  Al-Jazeerah Region on June 17, in Amuda, in northeast Syria, to discuss the measures that will be taken to alleviate the burdens of the economic crisis in Syria and the regions of northeast Syria, given the collapse of the value of the lira (the Syrian dollar) against the dollar, especially after the “Caesar” Act entered into force on June 17 as severe economic sanctions imposed by the United States to hold the Assad government and its supporters against the Syrian people accountable.

The meeting came after the Presidential Body of the AANES listened to the opinions and proposals of the people on how to alleviate the burdens of the economic crisis.

One of the measures is that employee salaries rise by 150% as of June 1, 2020, as well as [a reduction in the price of] internet packages, [supporting] small projects, in addition to opening consumer institutions and monitoring exchange offices to prevent the exploitation of the people, and support agricultural projects.

In this regard, [Hawar News] has monitored the opinions of the people in Qamishlo city about how will these measures to contribute in alleviating the economic crisis in the regions of northeast of Syria.

The farmer Aisha, [who] has an area of 40 acres, explained that the decision of the administration about supporting agricultural projects is very useful, and he said, “When the administration provides support to farmers, production will increase and thus the prices of agricultural crops will go down, which will benefit in the peoples of the region.”

she demanded on her behalf, the concerned authorities of the necessity of securing the diesel and fertilizers for the farmer to complete his work, as well as providing agricultural pesticides to farmers at cheap prices.

Abdul Majeed Qaju explained that opening consumer institutions will benefit society a lot, as it will contribute to controlling the prices of consumer goods. He said, “This step will please people and satisfy them a lot.”

Foreign exchange must be monitored

Qaju pointed out that monitoring the exchange offices, is a constructive decision that the cashiers take advantage of the situation, by giving the abroad remittances in the Syrian currency.

Member of the Supply Division in Qamishlo District, Omar Zori, described the administration decision of the employee salaries rise by 150% as “positive”, and said, “This step will contribute 80% to improving my living conditions.”

Zori added, “My monthly salary is estimated at (80,000 SP), [and] was not enough, especially in light of what our regions are experiencing from an economic crisis, but now, after the administration’s salaries’ rise, my salary will be (200,000 SP), which will make a big difference in terms of securing my needs during the whole month.” He thanked the administration for this effective step.

Steps to make the administration measures a success

The economist Alaa al-din Farhan noted that the [rise in] employees’ salaries is a constructive step. It proves the administration [has] awareness of the living reality. It is going to be a momentary solution for the economic crisis in the region.

Farhan indicated that opening consumer institutions would be a purposeful step that would enable the administration to control the economic situation If it opened approximately 50 to 100 centers, and he said, “Because opening a few centers would be a useless step.”

He noted that, “The administration can replace the idea of opening consumer institutions with communes, or using them to collect citizens’ data, thus providing the region and individuals with the primary materials that the administration will support.”

With regard to support for agricultural projects, Farhan indicated that it would be an effective step if these projects were placed in the hands of specialists who are proficient in work in the field of agriculture and give them to farmers at reasonable prices.”

Farhan stressed the necessity of monitoring the exchange offices, and said, “In the event that the cashiers are monitored by the concerned authority, by requesting the data of the people who are speculating (i.e. the people who spend more than 10,000 dollars) and holding them accountable will be an effective step, because we see a lot of investors and speculators going To speculate with $50,000 and above.”