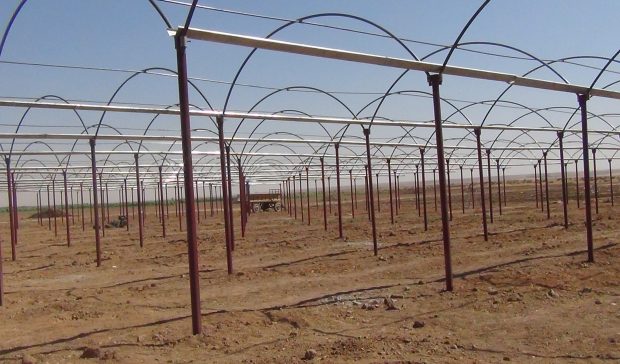 In Kasrek [Qesrik] village of Dirbêsiyê‎ [Derbesiye / Al-Darbasiyah], a co-operative society with 4,000 members started working on its economic, agricultural and livestock projects that will boost the community economy in the region.

After a series of meetings of the people in the region, organised by the Economic Council in the Dirbêsiyê area, a new co-operative was formed in the village of Kasrek located 50km south of the city Dirbêsiyê.

This co-op has four thousand members, 500 from Tel Temir [Til Tamer / Tell Tamer / Girê Xurma], 500 members from the Zirkan area, 300 members of the families of the Derbesiye area. Each member participated with the amount of $100 per share.

Community economic development and job creation as the basis of the co-op.

The goal of Kasrek Co-operative Society is the development of community economy, to raise the spirit of co-operation at work among people in the region, in addition to providing job opportunities. Also, the people working and supervising the project are the members themselves.

The co-op includes seven agricultural and livestock projects across an area of 37,000 acres.

The plan of Kasrek Co-operative Society includes seven projects distributed over eight years, on 37,000 acres of land. These are agricultural and livestock projects.

25 acres have been allocated for greenhouses and vegetables like tomatoes and cucumbers. 35 acres for autumn crops such as onions, garlic, radishes, lettuce, spinach, cabbage, carrots, parsley and Swiss chard. 110 acres for corn as fodder for livestock and 300 acres for trees that bear fruits, such as olive trees. The planting of trees will start in November, 2016.

To ensure productivity, the co-op bought four harvesters, four tractors and two tankers to transport diesel fuel, as well as two trucks and a small bus to transport workers.

The co-operative continues to work on opening an agricultural pharmacy that belongs to the co-op, to get medicine and supplies for the crops.

Regarding livestock projects, 1,000 sheep have been bought and 400 acres have been allocated for breeding the sheep and building stables. A veterinary clinic has also been opened in the co-op to watch and treat the livestock, and to get medicine and special medical equipment for the livestock.

The co-op’s future projects of breeding cows and bees and opening a dairy factory.

According to the coordinators of the Kasrek Co-operative Society, it is planning to open a dairy factory, and to breed cows and bees, as well as increase the number of sheep in the co-op to include 10,000 heads.

According to the co-operative’s administrators, since work began on these projects, more than 1,000 people have inquired about the co-op and asked about how to join it.