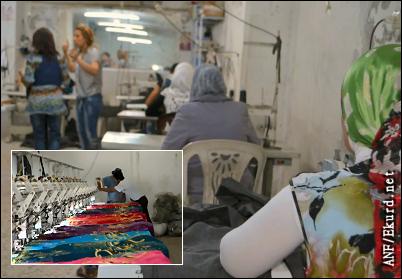 QAMISHLO, Syrian Kurdistan,— 23 Kurdish and Arab women, most of them displaced from cities such as Aleppo, Damascus, al-Raqqah and Idlib, are working in the Warşîn Cooperative in the city of Qamishlo (Qamishli) in Syrian Kurdistan region (Rojava) to support their families.

In Syrian Kurdistan the people are engaged in a struggle to establish a new life.

Women are playing a central role in this struggle. As the revolution develops women are getting involved in all sectors that were previously reserved for men, from defence, to health, education, the justice system and agriculture.

Women coming together within the Yekitiya Star [now called Kongreya Star—ed] women organisation are setting up cooperatives, such as the Warşin Work Centre, where 23 of the 25 employees are women.

Many of the women at the centre have taken refuge in Rojava after being displaced from other parts of Syria.

Naima Bektash, a representative of the centre, said that they aimed in particular to give women migrants to Syrian Kurdistan the opportunity to participate in working life.

The Warşin centre began last year with 2 machines and 4 workers, but now has 40 machines and 25 employees making clothes for the Jazeera [Cizîrê] Canton.

Bektash said the women worked 8 hours a day and had a share in the products, adding that they intended to enlarge operations and employ more women soon.

The centre produces 2,000 pieces of clothing a week, doing all its own cutting, sewing and other processes.

Fatma Shihade, an Arab woman from Idlib who works at Warşin, talked of her experience. “We came to Qamishlo on account of the conflict in Syria. They gave me the opportunity to work here and didn’t discriminate against me because I’m Arab. I want a Syria where Arabs and Kurds can live together fraternally to be established.”

Jihan Mohamed, another worker at Warşin, is one of thousands who fled ISIS gangs in Reqa (al-Raqqah) and took refuge in Qamishlo. She said: “Following the recent clashes in Reqa and because of oppression by ISIS gangs, our family came to Qamishlo. If the women at the Warşin work centre hadn’t given me the opportunity to work, we would now be in a refugee camp.”

Abdul-aziz Ahmed fled from Aleppo to Qamishlo. Ahmed is the oldest child in the family and is responsible for looking after his family.

He thanked the women at Warşin for giving him the chance to work. “Thanks to this job, I am able to look after my family,” he added.