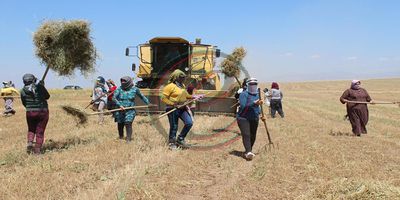 The Women’s Economy Committee is setting a new precedent by convening the North Syria Women’s Economy Conference. Mediya Serxwebûn talks about how the number of cooperatives in Rojava has reached 50, and states that they will come up with a three year plan based on their experience.

Qamishlo [Qamişlo / Qamishli / Al-Qamishli] ─ Rojava is breaking new ground. The Women’s Economy Committee, which has been active since the the Rojava revolution and has now been working for three years, is going to convene the “North Syria Women’s Economy Conference”.

The first conference of its kind, this event will take place on 15-16th June. Mediya Serxwebûn from the Qamişlo Women’s Economy Committee answered ETHA’s questions.

Serxwebûn says they initially started their activities in 2014, and organised in the form of small businesses: “In 2014 we only had three sewing workshops. We began to work on our model of organisation in a women’s economy around these. This work revealed the way in which we can create our social organisation”.

The first women’s cooperative is in the town of Derik

“There was a shortage of bread in Rojava. Making your own bread is a part of the Kurdish people’s history and culture. We realised that society was getting alienated from this. We started founding our own bakeries upon a recommendation. We had opened three bakeries by 2017, and more were founded in various towns afterwards. I think we provide a social benefit to the Rojava revolution. This was the first cooperative experience.”

Serxwebûn adds that another outcome of their activities has been getting women out of their houses to participate in social life. “We came up with goals for the following period in the previous year’s evaluations. Enabling women to get out of their houses was one of our primary goals in 2016. We resolved that we would explain our economic perspectives to women. People would appreciate the importance of joining cooperatives. We agreed that this should not just appeal to a logic of ‘I can go to the cooperative and make money’, but of ‘I will socialise and learn about collective work, communal living, and cooperate with people I have not met before.’”

Serxwebûn stresses that every participant in the cooperative needs to work, as each contributes with their labour, adding, “We do not hire workers. We are against this. It is up to the participants to do the work themselves”.

Serxwebûn goes on to say the following:

“I think it is hard to say that the work of our cooperatives has been the solution for our people, but we can at least say that there is an awakening and a bond of trust. We put cooperatives onto the agenda within the community. They now create projects on their own. Three or five women come together and they inform us that they have an idea for a cooperative on a plot of land that they have found. We help them with this, because they do not know how to begin. Sometimes they do know, but lack the means, asking us for support. These situations foster a consciousness in society. Confidence is built up through support.”

Mediya Serxwebûn says that they are not experts in economy and that they carry out their activities through simple steps. “What needs to be seen is that we try to demonstrate the fine line between capitalism and socialism through cooperative work. You cannot explain the details of capitalism or socialism right off the bat to a woman who approaches you saying, ‘I want to do something for society, for the people, and for myself.’ We do this through the practical experience of the cooperative. This brings them to an understanding of socialism and sharing in practice.

Serxwebûn remarks that many women have begun to join in with their activities, drawing attention to women’s confidence increases when they take part in assemblies and communes. She also emphasises that this situation compels men to change too ─ “They used to think along the lines of ‘I can beat women, and do as I please. She has nowhere to go. She must stay for the children’. Now they think differently. The women that participate in this work share with us how this happens, as the men start to think ‘If I beat this women, she is in a self-reliant position and she can leave’. This shows that while there is a lot of work to be done, there is some progress”.

Serxwebûn informs us that 15,000 women are involved in the cooperatives and other projects, as now there are 50 cooperatives, and the Women’s Economy Committee has around 200 workers. Serxwebûn further explains that 15-20 women are employed in every region, and that they consider the economic field a battlefield and position themselves accordingly.

Serxwebûn adds, “Our cooperative activities are the main field of struggle in Rojava. The economy is the basis of everything, social and material. This is our understanding of the situation, as well as that of our people. We are trying to construct a completely communal life and this sets the general basis of all our work. This can be seen in all fields ranging from diplomacy to education. The most important pillar is the economy. There is no other example of such activity for a women’s economy in the Middle East. We are in touch with the Landless Peasant movement in Brazil; we have some discussions and exchange our ideas. However, we operate completely around the philosophy of the Kurdish people’s leader, Abdullah Öcalan”.

We will look for solutions to our problems with the conference

Serxwebûn says that the Northern Syria Women’s Economy Conference will come up with a plan for three years, adding that, “The plan will be determined following debates in all cooperatives and communes. We are facing an embargo. We are having trouble with setting up our projects. For instance, one of our friends says that they want to open a tailor’s. They want to sew civilian or Kurdish regional clothes, but there is no fabric. There is not a factory to produce fabric. The roads are closed due to the embargo, and the imported product costs twice the normal amount. These are some of the issues blocking the realisation of our projects. We will look for answers in our conference.”

Reiterating that the conference will be the first of its kind, Serxwebûn says, “There was one economics conference in Rojava in the year 2015. We want to include participation from abroad, but there will be some people who cannot make it due to the embargo. They will participate over teleconference and Skype.”

Serxwebûn says that they do not have a bureaucratic conference in mind. She says, “We want to create a different kind of conference. Everyone from the farmer to the smallest producer, from the smallest to the largest cooperative will be there to discuss problems that day. Our goal is to have the actual owners of the economy discuss it. The arrangements, ranging from seating in the conference hall to the actual contents of discussion, will be made through women’s collective intelligence”.