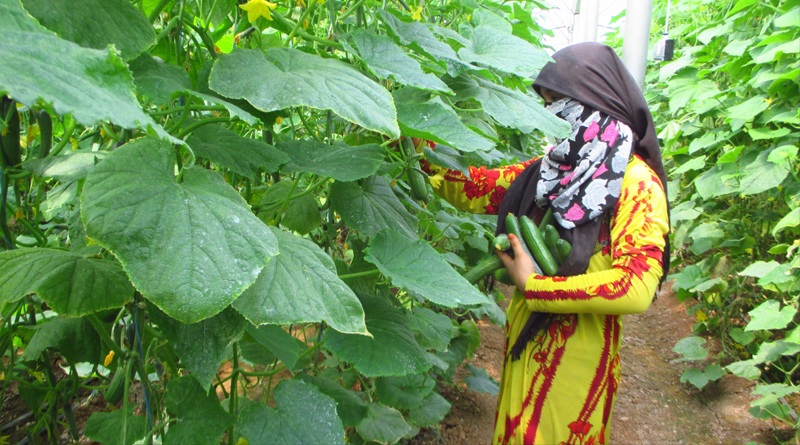 TIRBESPIYÊ – Rojava women, who work in the greenhouse, said that they have begun the first harvest in their greenhouse and that they would expand their planting protects by mentioning their projects on autonomous economy.

The Greenhouse Project began in September 2016 in the Tirbespiye [Tirbespî / Al-Qahtaniyah] city of Jazira Canton [Kantona Cizîrê‎ / Cezîre] in Rojava. Successful results were obtained from the project led by the Women’s Economy Assembly. Agricultural Engineer Robîn Mirad gave information about their projects. Noting that nine greenhouses are formed on two acres of land, Robîn said, “We formed the greenhouses in September. We planted cucumber seeds on February 23rd and we got seedlings. Seven women are working in the greenhouses.”

‘This project is an experience for us’

Stating that the women are carrying out their work in an organized manner, Robîn said, “We collect 600 kilos of cucumbers in the greenhouses every day. The purpose of our project is to meet the needs of the people. We are working to create an alternative against the embargo imposed on Rojava. In addition, we aim to eliminate the high prices in the market. We will have a positive effect on the market with the success of this project. This project is an experience for us. We aim to spread such projects in the next years.”

‘Production will have a positive effect on the people’