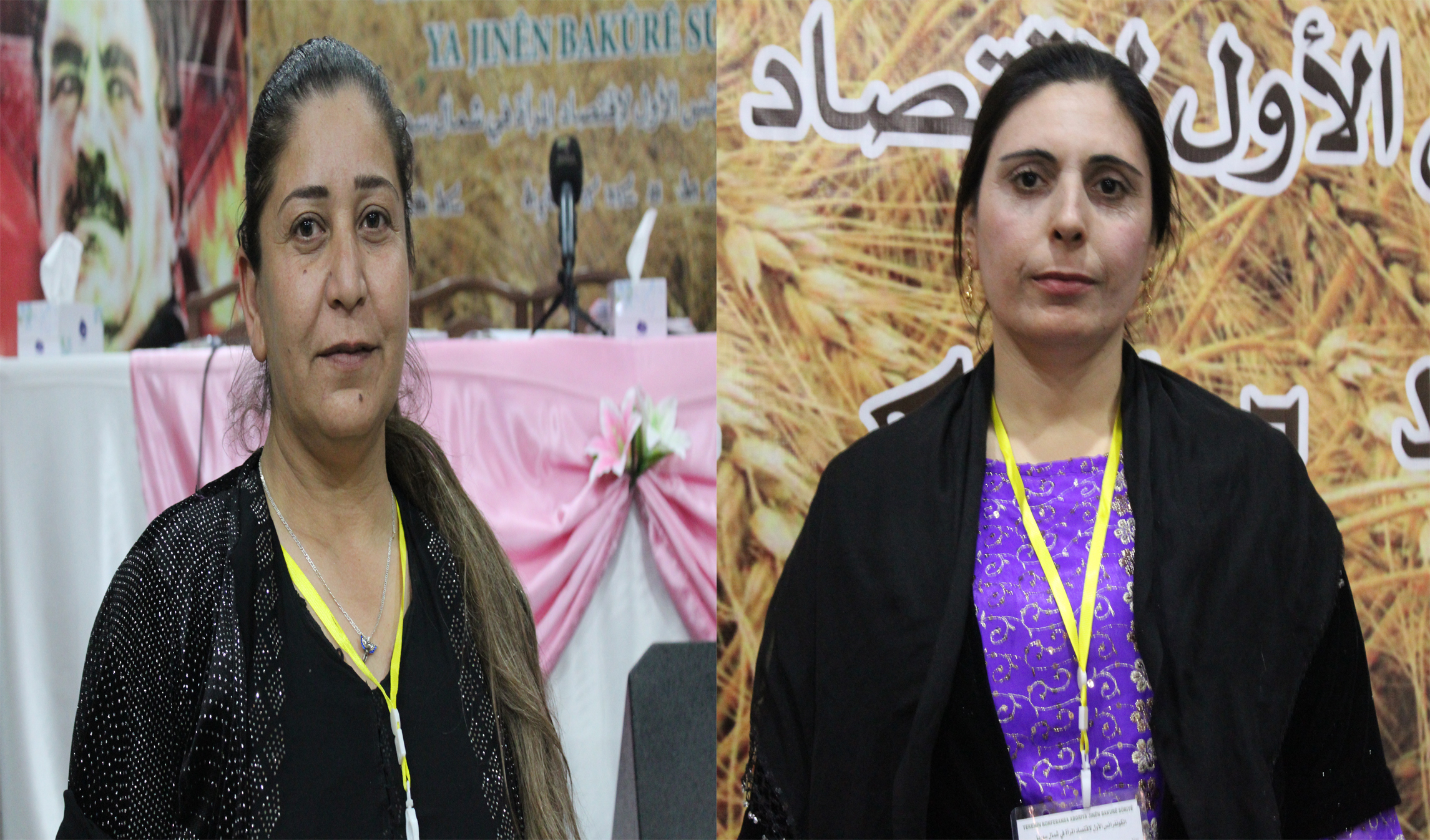 Many members who participated in The First Conference of Women’s Economy in North Syria mentioned that women are increasingly participating in economic life, building and improving the communal economy, which in turn benefits society and helps meet people’s needs.

150 delegates participated in the conference from both Kobane [Kobanî] and Jazira [Cizîrê‎ / Cezîre] Cantons, and also from Manbij [Minbic / Mumbuj] and Girê Spî [Tell Abyad]. Hawar News interviewed many of the participants, and asked their opinions about the conference and how important it is.

Mayasah Abdi, an administrator in the Committee of Women’s Economy in Derik [Dêrik / Al-Malikiyah], said, “First, I’d like to congratulate all the women here in the conference and also in North Syria for having this important conference. We want to emphasise the role of women in the economy by training them and finding different ways for them to organise, and also to have a creative economy that will give us some economic achievements by next year, and in the future in general. We will open special academies to develop cooperative projects and increase the number of women in them, to allow women to become more self-reliant, to meet their own needs and the needs of society.”

Mayasaha stressed the importance of women’s participation in the process of economic and social development, and said that the presence of women in the market should be inevitable, it will raise her and her family’s income and stimulate the growth of the communal economy.

Mayasah talked about some of the suggestions that were made in the conference, which focused on raising women’s economic awareness and giving them general knowledge about the communal economy by opening special women’s economy academies and developing agricultural and livestock projects in a creative way, so that it becomes a model for developing a women’s economy that can be emulated across the Middle East.

Mayasah also mentioned a special market for women’s products, where women manufacture, market and sell their products. This, she said, would help make women self-reliant and give them an opportunity to ensure their economic independence.

Layla Yosef, an administrator in the Union of Cooperative Societies, also mentioned that the conference is trying to reach decisions and suggestions that would improve the women’s economy. She said, “The people in Rojava are facing a blockade from four sides, and so we, as women, are working together to develop and improve economic projects in the sectors of agriculture, livestock, trade and industry. Many women in Rojava have been economically very active in the last three years, especially in cooperative societies and other projects designed to address the women’s economy.”

Finally, Layla confirmed that women played a leading role in history, and should lead the economic process. She said, “We should work to revive this history by representing women in all the institutions and economic sectors of the Self-Administration in Rojava.”