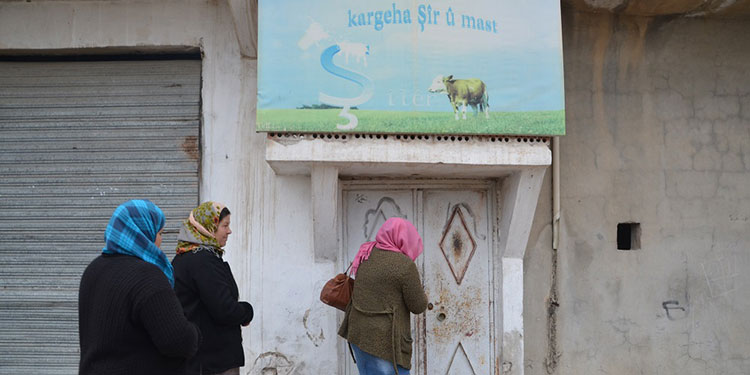 The women of Rojava are creating their own economy by founding cooperatives. Having faced a lot of resistance from their communities, with people telling them that they would not be able to do this, they now rejoice at their successes. “Now, we are stronger,” they say.

As leaders of the revolution, women in Rojava are working on expanding the system of communes and cooperatives. They distribute their produce among the population with the aim of developing the women’s economy. Ten women have founded a milk and dairy product cooperative in the town of Dêrik [Derik / Al-Malikiyah] with the support of Kongreya Star. The work is divided up and shared in the way of a commune, the women work four hours daily producing milk and dairy products.

With the support of the Kongreya Star

One of the cooperative’s members, Narınç Sadık, started this work by unifying the budgets of ten different women. Kongreya Star added the rest of what was needed to launch the cooperative. Narınç tells us how the cooperative was founded: “The Economic Committee of Kongreya Star had a meeting with us. We talked about how to develop a women’s economy, why we need it and what we can do. They said that women can create their own economy by organising in communes and cooperatives. But at the very beginning, a few of us did not have the self-confidence to do this, so we started with only ten women. We work together in a communal way.”

They said, “You are not able to do this”

The community is happy with the products that are both organic and sold at a low price. At the same time, the members of the cooperative make a living, says Narınç. However, her husband and her family were initially against it. Narınç tells me how determined she had to show herself: “However much they wanted me not to do it, the more I went for it. I only began to understand how much we could accomplish there together.” My husband said, “You cannot do this, you cannot take care of the children and do this work at the same time”. But that’s not what happened. I proved him wrong. I don’t have to depend on him, I can earn what I need, and I feel good like this. My husband isn’t the same anymore either. If we [at the cooperative] need something, he helps and pays for it.”

Şerife Abdal is the sole provider in her household. She does not feel she needs anyone else and says, “I raise my kids with the money I earn”. At the beginning, the work was difficult, but Şerife says she overcame that phase. “Now we feel more comfortable. We like each other and working together is fine. Before, most of our lives was spent inside the home; now this changed. We have met a lot of new people because of the cooperative. We are more in contact with our neighbours and many other women. I have more self-confidence now. I feel happier and more useful”.

They became role models for other women

With their business, the women have become role models for others like them. Hatice Muhammed says, “This week there were three or four new women who asked to become members of our cooperative. Working here, we don’t have to rely on men for money. The people around also profit from our work. That’s what makes us happiest.”