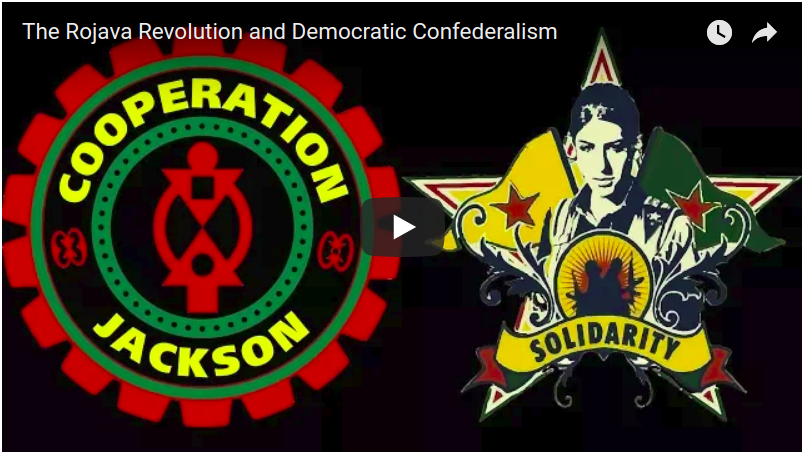 A Cooperation Jackson dialogue with Ercan Ayboga, Co-Author of “Revolution in Rojava”, an activist of the Mesopotamian Ecology Movement

Come learn about the ideological, political and programmatic similarities between the Jackson-Kush Plan and the radical democratic movement in Jackson, Mississippi and the Charter of the Social Contract, which serves as the Constitution of the Rojava Cantons, guiding the revolutionary transformation of Syrian Kurdistan. Learn more about their experiment with radical democratic confederalism amongst the various peoples and ethnicities of Syria, their work to build an anti-capitalist solidarity economy, to liberate women, and to restore the ecology.

Given the widespread violence and suffering in Syria, it’s not unreasonable that outsiders look at the situation as unrelentingly awful. And while the reality of the devastation is undeniable, there is reason for hope in at least one small pocket of the nation: the cantons of Rojava in Syrian Kurdistan, wherein the wake of war people are quietly building one of the most progressive societies in the world today. Revolution in Rojava tells the story of Rojava’s groundbreaking experiment in what they call democratic confederalism, a communally organized democracy that is fiercely anti-capitalist and committed to female equality while rejecting reactionary nationalist ideologies. Rooted in the ideas of imprisoned Kurdish leader Abdullah Ocalan, the system is built on effective gender quotas, bottom-up democratic structures, far-sighted ecological policies, and a powerful militancy that has allowed the region to keep ISIS at bay. This first full-length study of democratic developments in Rojava tells an extraordinary and powerfully hopeful story of a little-known battle for true freedom in dark times.