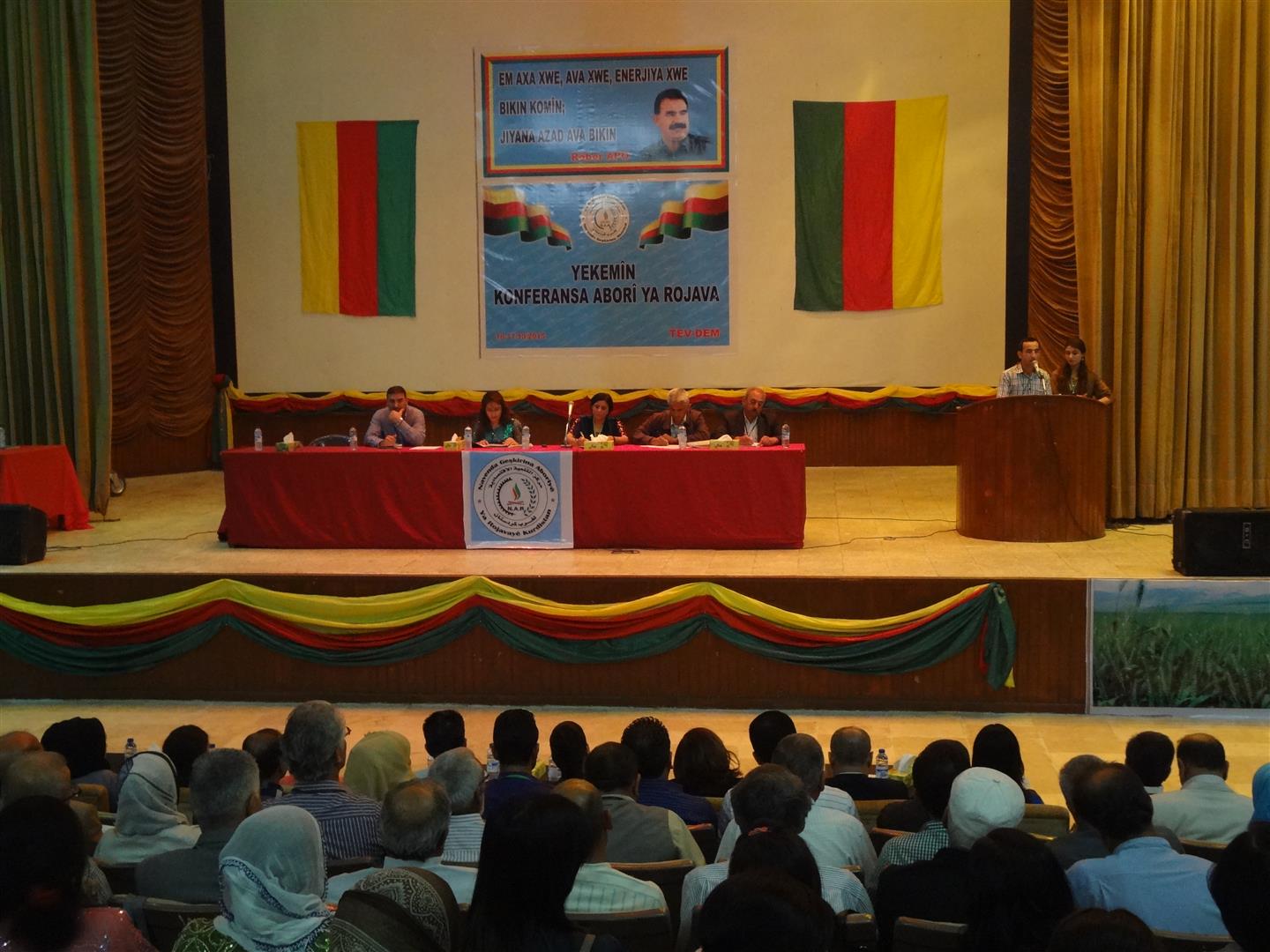 The economy is a social, participatory phenomenon and achieving an independent fair social economy is no less important than security, politics and diplomacy. Building a free and fair economy and achieving self-sufficiency begins with the smallest unit in society, which is a commune, and the effective participation of women as representatives of the co-operative economy. Further, all the political and administrative institutions as well as the security forces must unite and participate in supporting the co-operative economy and thus attain self-sufficiency.

These views were unanimously approved on the first day of the first economic conference in Rojava, which opened on Friday, October 16th (2015) in the Aram Takran Centre of Culture and Arts in Rmaylan town.

There was broad participation by representatives of various political institutions, both administrative and professional and from different provinces of Rojava, and this was a clear sign of the crucial importance for the development of the economic sector in Rojava through cooperation and unification of all these various institutions as well as the participation of different segments of society.

During the conference, many speeches were given in the name of various administrative, political and civil institutions in the provinces of Rojava. Although the speeches were all focused on the economy, everyone avoided using capitalist terminology, stressing that the construction of a free economy is linked to the development of free thinking in society. Ilham Ahmed, representative member of the Democratic Society Movement [Tev Dem], said in her speech, “Suppressed minds lead to the development of repressive policies and thus the evolution of an economy based on servitude. Therefore building a free, independent and fair economy requires primarily owning a free, independent mind.”

A cooperative economy means that the community decides its economic system

It’s clear that the conference is not moving towards the tradition of a particular economic model, but is more trying to embody the concept of a co-operative economy as a model for an alternative to the exploitative capitalist economy.

Co-president of the Democratic Union Party, Saleh Muslim said in his speech, “A social economy means that the community decides its economic system, that society acknowledges the methods of securing its standard of living. Co-operative associations are the best embodiment of a cooperative economy; the association will be based on communes, which means society is the primary representative of the economy.”

No freedom for the hungry and needy

All the speeches touched on the daily concerns of citizens, the need to solve their economic problems and to raise their level of income by investing available resources in Rojava.

This was confirmed by the head of the Economic Commission in Al Jazeera province, Siham Kerio in her speech: “The people will only be free from hunger and need if there is a return to the sources of wealth which is the economy, democracy, freedom and equality. Clearly our economic policy relies mainly on self-production and is based on re-activating the stalled work of economic projects, and the mechanism for this is to work hard within the effective plan for the future in accordance with the concept of a cooperative economy.’

Women are a central part of the cooperative economy

Remarkably, the presence of women in the conference, particularly in the opening events does not seem a coincidence but illustrates the importance of the role of women in the building of a co-operative economy. Out of eight speeches, five were by women, representing various political, administrative and economic institutions in Rojava.

The Administrator of the Union Star organization, Waleeda Poti, spoke extensively of the effective role of women in building the social economy throughout history and even today, the moment and the role assigned to her for the advancement of the economic sector in Rojava.

Poti said, “Mention of the term economy brings to mind the role of women due to the nature of the women’s relationship with the land and nature. The term economy means securing the needs of living within the community, women are the most dynamic in society throughout history.”

From the above, it is clear that the conference is heading towards further discussions and dialogue in order to lay the foundations of a co-operative economy, ensuring economic independence on one hand and achieving self-sufficiency and meeting the daily needs of the people of Rojava.