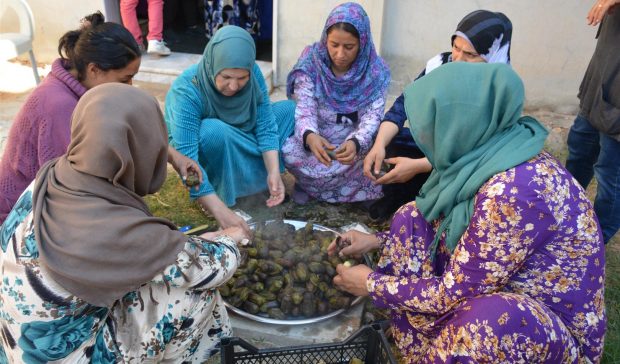 Women in Hesekê [Hasakah / Hesîçe / Al-Hasakah] have started a second cooperative, following the success of their first.

The women in Hesekê are trying to improve the economic situation of women by forming special cooperative societies for them, allowing them to become self-reliant, and creating job opportunities for them.

Preparations to form a second coop have begun, following the success of the first cooperative society in which women work on the preparation of muhamara.

Members of the Economic Council for Women, which consists of 17 members, both Arabs and Kurds, started a project to prepare makdous, a popular dish made of eggplant, walnut and oil.

Each member contributed 25,000 SYP in the coop, and 1,500 kilos of eggplant was bought with this sum of money.

The women are making makduos in Martyr Avin community centre in Kalasa street. Once it is ready, it will be sold in the market at prices lower than market prices.

Kongreya Star administrator Anoud Qiro said that their first project was successful and that there was a lot of demand from women in the city. Anoud attributed the success of the project to the low prices of products compared with market prices, as well as the quality of the products.

Anoud called on all the women to participate in cooperative societies.