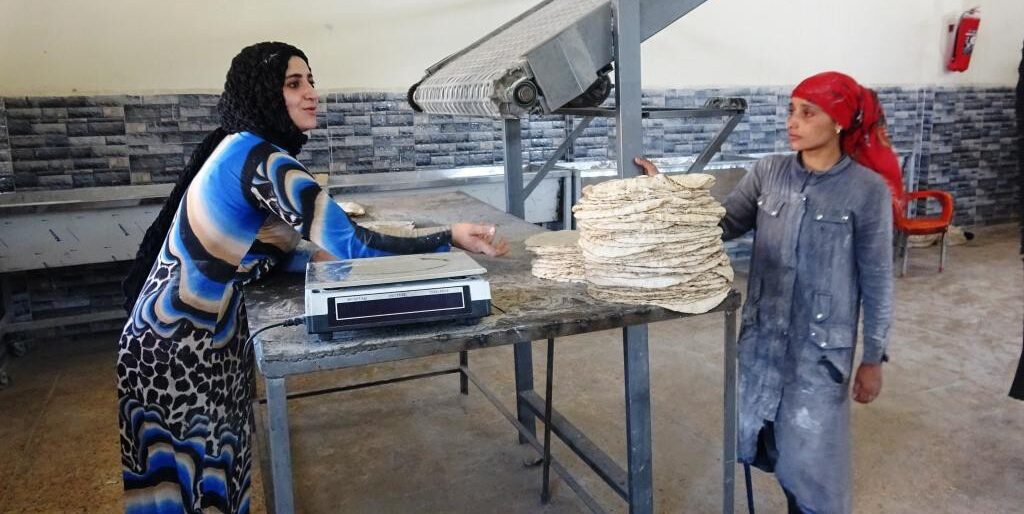 Early 2019, the Raqqa Women’s Committee put forward plans and projects for the future. In two years, these have been realized. The Committee has thus provided jobs for nearly 5,000 women in Raqqa and its surrounding villages.

At the start of this year, the Women’s Committee implemented several plans that were previously approved. In this way, the committee hopes to reduce unemployment among the women of Raqqa and give them opportunities to work.

So far, the Committee has provided about five thousand jobs for women, in order to improve their economic status and living conditions.

Despite a lack of resources, the committee has established more than 30 special economic projects for women, including poor women, the wives and mothers of martyrs, women whose husbands have died, and divorced women.

The projects that have been opened include large commercial projects and smaller projects. The Committee has placed importance on agricultural work, because the people of the region earn a large part of their living from agriculture. In this way, they hope to both develop the region’s economy and support women.

The projects do not only support women from Raqqa. Displaced women from northwest Syria and other parts of the country also benefit.

To support these women, projects like the Ribûi El-Xeyr Cooperative, which supervises displaced women from the occupied areas and from areas under government control, have been established.

To start its work, the committee began with educational programs to prepare women for different fields. A small number of women participated at the beginning, and that number has subsequently increased. Before the beginning of this year, nearly 5,000 women had enrolled in these programs.

Great Importance Given to Agriculture

The Women’s Committee has opened many agricultural projects, including greenhouses. In this context, two large projects were opened in the regions around northern and eastern Raqqa, especially in the towns of Hikûmiyê and Reqa El-Semra. About 155 women benefit from this project.

Furthermore, agricultural land in areas south of the city has been cultivated. About 62 women who are experts in agriculture benefit from this project.

In the second phase, after agricultural projects, projects for livestock and animal products were also opened. The committee has opened a yoghurt and cheese project in the town of Hikûmiye, east of Raqqa.

The committee suggested that projects related to honey be opened in five villages and towns around Raqqa.

So far, 610 women have benefitted from animal production projects, and this number will increase in the future.

The committee has also emphasized projects related to textiles, which began in the city and have since been opened in the surrounding villages.

Sewing projects have been opened in Teyar neighborhood in the west, Remliyê in the northeast and Meshleb in the southeast of Raqqa city.

135 women benefit from these projects, and their work will continue. According to these working women, the projects have improved their economic situation.

After the success of previous experiences, the committee is attempting to establish special projects in the region. In this context, a dessert shop project was successfully opened in Raqqa. The first such special project was opened in Qiwetli. Six more projects, including bakeries, have been opened in neighborhoods of the city and in surrounding villages, supporting 60 women.

The Committee had to overcome many challenges in order to support the women of Raqqa. Feyruz Xelil, a member of the leadership body of the Raqqa Women’s Committee, says that a lack of opportunities means that some projects have been delayed.

“The community didn’t accept the idea women could lead these projects. We also saw other difficulties, like a lack of expertise and experience. But by coordinating with cooperatives, we have educated more than 2,500 women in different courses, and begun projects.”

Xelil explained that the committee started by seeking to eradicate the ideas that limited women’s work, and continued: “We have also visited women with disabilities, so that we can support them.”

Plans for Next Year

Evaluating the work plans for the coming year, Xelil said: “We want to establish a special sports club for women. We also want to establish a center for older women, a shopping center to meet women’s needs, and a legal center related to family issues.”

Xelil continued, “A workshop to support women who have suffered from violence will also be opened. Professionals in psychology and law will play a role in supporting this workshop. A health center for farmers and agricultural workers will be opened, as well as a factory. And we will continue to develop and strengthen our existing projects.”