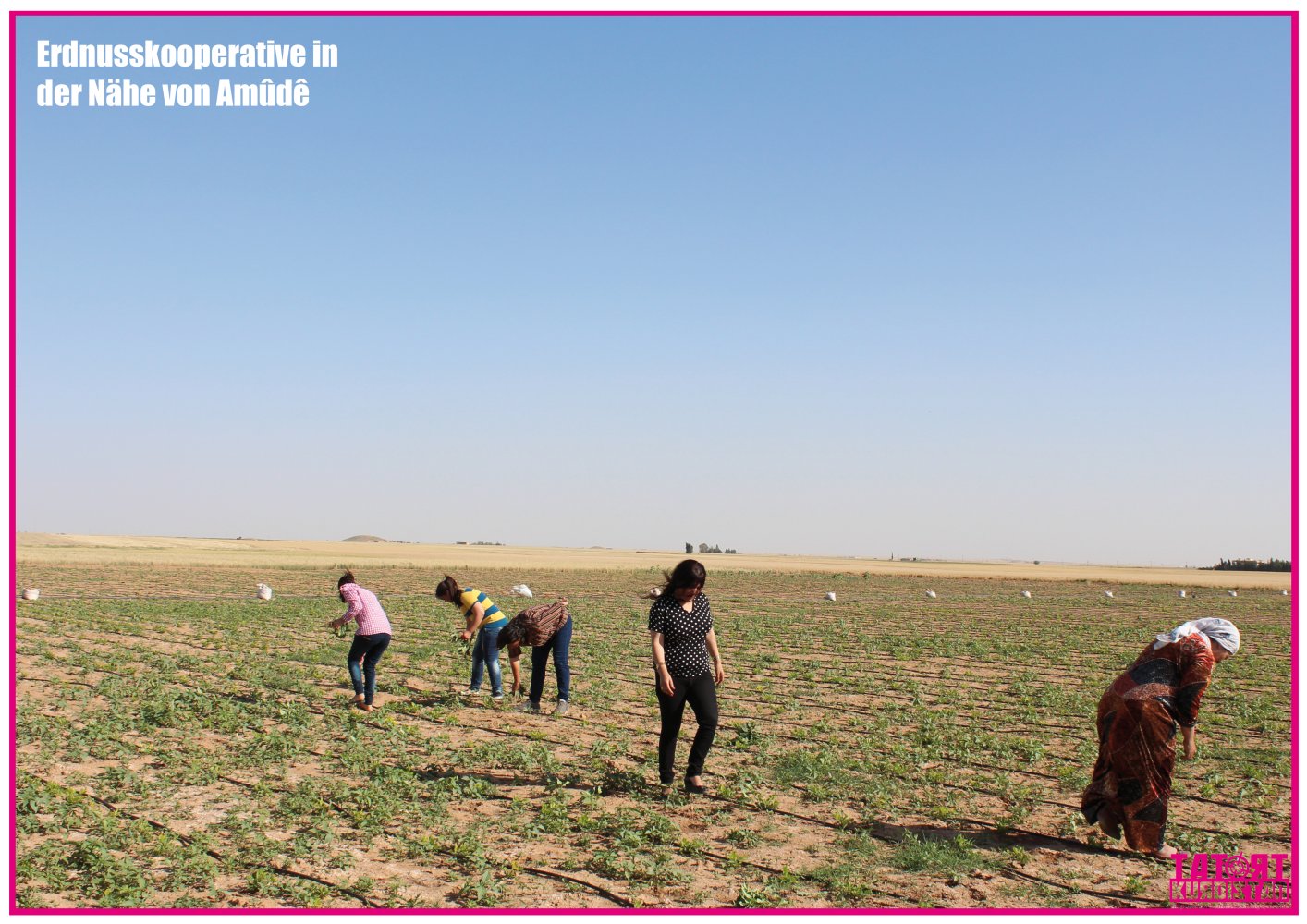 Until now many projects were not possible because the war situation dominated everything. Only this year the situation has become more stable. We want to develop a social and communal type of economy that we want to realize through cooperatives. The goal is to create a communal, ecological and equitable economic system.

In the phase in which we are now, we plan to hold many seminars about the economic system we are envisaging. We want to overcome the model of a state-controlled economy. To be able to do that, it is important to give people the needed information, and we want to accomplish this via “economy-academies”.

An important aspect of our work at this moment is providing communes with drinking water and electricity, and organizing the cleaning of the streets. With regard to agriculture, we take care of seeds, animal feed and fuel for the farmers.

On top of this, we centre our efforts on providing staple foods to the entire population; the production of flour and bread is an elemental part of this. We are also busy with infrastructure (roads are in a bad condition right now), and of course taking care of the many refugees. In order to build homes for everyone, we have founded co-operatives.

There are endless difficulties and problems that we have to face. To start with, several small refineries had to be constructed in order to be able to make fuel for agriculture and motor vehicles (earlier the crude oil that was extracted here was processed elsewhere in Syria). Many small places of production (the state had deliberately prevented bigger places from springing up) had been closed down after the toppling of the regime. They had to be re-opened now. The embargo is making all this difficult. A cooperative was founded to support local companies with their projects. We are open to foreign companies who want to invest here, according to international rules.

The economy is being coordinated by the “Movement for a democratic society in West-Kurdistan” (TEV-DEM). The projects are being developed according to the outlines of Democratic Autonomy. At the basis of a communal economy is the organization of the population. Erecting the structures for self-administration has taken three years, but now the system is working. Society can now solve all its difficulties and problems itself.

According to which rules is the land distributed by the state?

The land, which before the revolution was being farmed by the state, has now been given to poorer people without land. Men and women have equal rights in this distribution. In some cases, only women were directly given the land. Everything that they need to build up the cooperatives is being given to them for free by TEV-DEM. Later, they give 30% of their revenue (to the new cantonal governments); they can keep 70% themselves. To date, several hundred hectares of land have been given away. For example, around Girkê Legê, 50 refugee families have received land. Most of this land is being organized in co-operatives. The local communes and the People’s Council check that people really give 30% of the revenue.

How about the private large-scale landowners? Are there plans for re-distribution of their land?

There are few large estates in private hands. At the moment it is too early to discuss a land reform. A big question is this: in the 1960’s and 70’s, a lot of land was taken away from local Kurds and given to Arabs re-settled in the region by the regime, with the idea of creating the so-called ‘Arab Belt’ (in an effort to Arabise the Cizîre region). We are not going to take this land away from the Arabs. We strive for a solution of the question in the framework of a democratic Syria, in which no one must be expelled and no one pauperised.

Is everything in the cities also being organized through cooperatives?

It is too early for that now. But we are working on this long-term; the goal is a social economy on the basis of democratic autonomy.

As concerns the oil, we are still at the beginning of things. There are no co-operatives. There is a lot of oil, but at the moment we only process what the population itself needs. We sell oil for only 20 Syrian Lira a litre to the population. This makes it cheaper than water. To begin with, we want to solve the electricity problems that we have. Until the revolution, electricity came from the Tabqa-hydroelectric power station near Raqqa. Since Raqqa has been taken over, the power station has been cut off. At the moment, we have a capacity of around 80MW, which is not sufficient at all. That is why a large part of the city population uses generators. Little by little, we want to replace the small generators, which create a lot of noise and soot in the cities, with bigger ones. For the city Derbesiye (Dirbêsiyê‎ / Derbesiye / Al-Darbasiyah), a generator with a 5MW capacity was acquired. In the long term, we hope for a solution for all of Syria, so that Rojava can be provided with electricity from Raqqa again.

How do you plan to overcome the wheat monoculture and start to create diversity?

According to our philosophy, we want to negatively influence the environment as little as possible and cause as little pollution as possible; this goes for agriculture as well. Some agricultural engineers are examining the conditions for fruit and vegetable cultivation. We hope that the self-sufficiency of regions will advance in this way. By next winter, we want to begin installing greenhouses. We actually produce a million tons of wheat per year right now. Before, we supplied cities like Homs and Hama in this way. Now, the only thing we are capable of doing is storing the wheat so that it does not go bad. After a few initial problems, this is working now. In Syria, this wheat is urgently needed, but the trade routes have been cut off by the Islamic State. Nothing passes; they would immediately confiscate it.

Many houses are being built at the moment, who is building them?

The population themselves are building these houses. This is also an indicator that many people are doing okay economically. Until now, the government had not allowed houses to be built in a radius of 25km from the Turkish border. Before the revolution, there was none of this type of construction activity. Of course, our city administrations are paying attention that building regulations are being followed. However, the cement comes mainly from the black market. There is a cement factory in Kobanê (Kobanî), but not in the Cizîre region (Kantona Cizîrê‎ / Cezîre / Jazira Canton).

How about cotton production and irrigation?

There is cotton production in the Cizîre region, especially at Serê Kaniyê (Serê Kaniyê / Serekaniye / Ras al-Ayn) and Hasakah (Hesîçe / Al-Hasakah / Al-Hasakeh). We cannot further process the cotton here, because we are lacking the factories for that. We cannot sell either the cotton, nor the wheat.

The wheat production happens with little irrigation, but cotton needs a lot. It is the richer farmers that plant cotton. We plan to organize all agriculture in a more ecological way in the long term.

How about the development of prices?

So far, everything that is being produced in Syria is cheaper than in Turkey, even despite the war. A lot of products are being manufactured in Syria, but in the current conditions they hardly ever make it to Rojava.

Will it be a big problem when the state stops paying functionaries, teachers, etc in Qamishlo?

Not at all. In Kobanê and Afrin (Kantona Efrînê‎ / Afrîn Canton / Efrîn / Efrin), the state has disappeared completely for the last two years. Only in Qamishlo (Qamishli / Al-Qamishli), teachers, functionaries and municipality workers are still being supported by the state, the rest is already being financed by ourselves. In the framework of Democratic Autonomy in a free Syria, the state will pay the salaries of teachers and functionaries again.

We have a very strong self-organization of the population. All institutions we are building are there to enable the population to organize themselves.