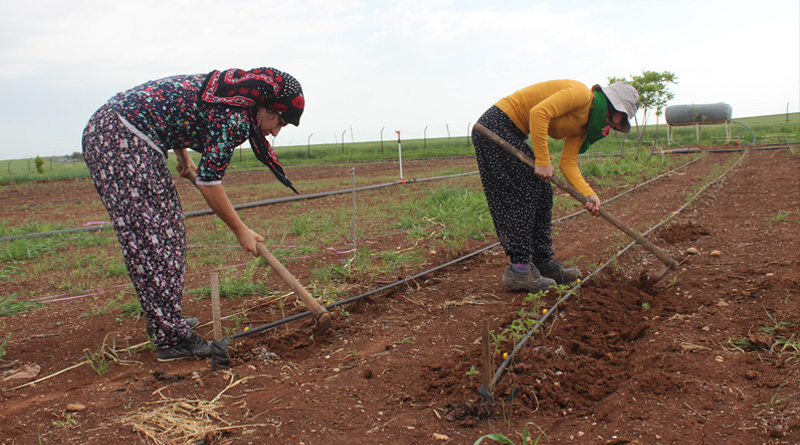 DİYARBAKIR [Amed]- While the ecologists have begun to grow crops in the field led by the Agricultural Seed Commission of Ecology Association, the seedlings are aimed to be distributed to the people by using the barter system.

Vegetables and greens are growing in the field formed by the Agricultural Seed Commission of Ecology Association in Diyarbakır in order to grow solidarity and to create a collective network. The members of the association, who started planting in the field in order to “grow the support to local seeds” three months ago, are now planting watermelons and shaping the soil. The members will use the products of the field communally. The ecologists aim to produce crops with local and organic seeds instead of hybrid seeds (genetically modified seeds), which are produced by Israel and give more products per hectare. The ecologists also give the seedlings they produce in the field to the people. Suna Sümer, Ecologist activist and member of the Ecology Association, gave information about their fields and said the fields would be active for four seasons and they would increase the production in the fields with a collective solidarity.

‘We distributed the local seeds to the families’

Noting that the Agricultural Seed Commission of the association has planned to carry out such a project for a long time, Suna expressed that they had started planting in the field three months ago. Stating that their greatest aim of forming the field is to strengthen the local seeds, Suna said, “Everything produced in the field is organic. The manure we use is organic manure; we use animal manure in the field. There are all kinds of vegetable and greens in this field. Today we started planting watermelons and shaping the soil. As ecologists, we come here every day. Before, we planted the seedlings in the greenhouse. After we grew the seedlings, we distributed them to the people by visiting all the villages, one by one. [There are those who want] local seeds to be annihilated in the villages after in the cities. We gave the seeds to thousands of families in order to raise awareness.”

‘The awareness of local seeds should be increased’

Saying that their solidarity network is increasing after the field, Suna said, “These seedlings are more useful for us if more people take them. Ultimately, our aim is to increase the support for local seeds.  This year will be a testing period for us. We will see what we can do and then we will conduct a more comprehensive and organised work next year. The awareness of organic seeds and fruits should be increased. Our struggle is for this.”

Barter system distribution for the seedlings

Underlining that they have distributed the seedling by using a barter system, Suna said they accepted chicken and the cocks in return.