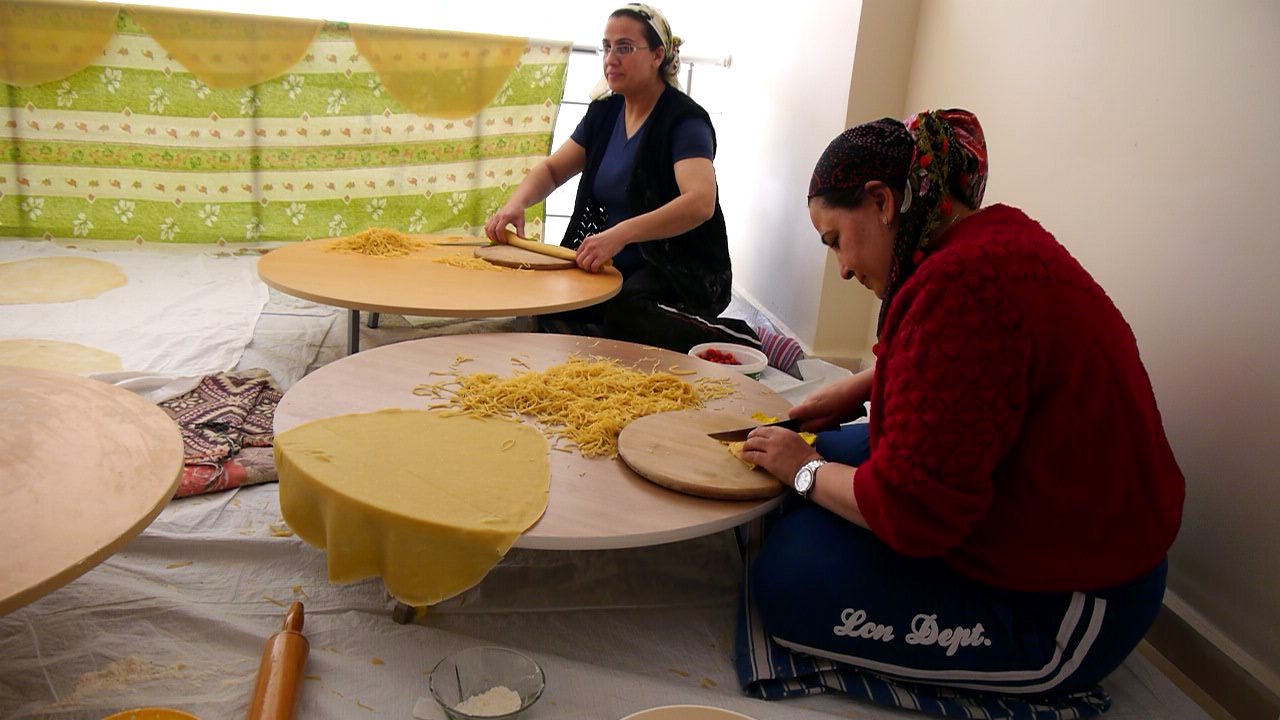 In the east of Turkey, next to Iran, we find the province Van [Wan]. Here, the Kurdish movement is developing several projects, including cooperatives for the production and distribution of local food products. These cooperatives are backed by the Economic Commission of the Congress for a Social Democracy (DTK). Some of its objectives consist in promoting local ecological food production, the creation of committees to mediate between small and medium-sized businesses, strengthening the level of consumption of products generated by the associations, and the setting up of new cooperatives through assemblies (“mejlis”) in the neighbourhoods and villages. Their aim is to create what they call a “Social Bazar” or “Social Market”.

In the province of Van, different production cooperatives are working, and various projects have been launched over the past few months. The top sellers are honey, strawberries, tomatoes and an indigenous breed of sheep that produces high-quality wool, as well as milk and meat.

Some towns have specialisations: Bahçesaray and Çatak have developed fruit and nut tree nurseries, especially walnut trees, together with an auxiliary industry of nut treatment. Erciş specialises in vineyards of white grape and greenhouses for different vegetables, whereas Saray counts mainly wheat fields. In the latter two towns, land and thermal waters have been collectivised and are managed by the communes.

Parts of the tree nurseries will be used for the re-population of the area to the south of Van, close to the province of Hakkari, where strong clashes occur between guerrillas and the Turkish military. The strategy of the military includes the destruction of the native flora where the guerrillas operate, survive and hide. These actions leave the earth barren and destroy not only the fauna and the flora, but also the way of life of the local population since time immemorial.

The Economic Commission of the DTK doesn’t only initiate producer and distributor associations, but also networks them in order to facilitate the sale and exchange of products, trying to get rid of the myriad of intermediaries that raise the prices, and which form an essential basis of the capitalist economy. Likewise, they understand that another of the key pillars is the cooperation between sectors and the development of a communal model of life, which makes the idea of a Social Market possible. This “Social Bazar” has acquired importance for the Kurdish Movement in Bakur over the last year. Since the DTK launched the project it has been trying to develop it through different Economic Commissions that are organised in each province. They believe that the model of Democratic Autonomy is only possible with the development of a of a strong solidarity and communal economy.

The basis of the development for all projects are the assemblies (meclîse) of each neighbourhood and village. It is those which come up with ideas, initiate, and work in the associations and cooperative projects. They also expand on-going projects by getting their immediate neighbours involved. The Economic Commissions in their turn have the mission of bringing the legal tools and the basic knowledge of organisation as well as reporting about the advances that have been made to the rest of the Kurdish movement. In this way, the knowledge and experience expands at a rapid pace.

In Van, a part of the financial support for the projects comes from the local municipal governments, most of which are controlled by the Democratic Regions Party (DBP), integrated in the HDP coalition (Democratic Party of the People), which is in close communication with Economic Commissions, since both are part of the DTK umbrella organisation.

The beginnings of distribution through cooperatives

The first distribution cooperative is a supermarket in the city of Van, which has been open for only three months. The goal of the supermarket is to distribute the food of the producer associations, as well as offering very cheap items within reach of families with little financial means. Some people involved in the movement are unemployed or have precarious sources of income. The only requirement is that the people are politicised and convinced of the need to spread the revolution and strengthen its economic base. The profit margin is negligible and mainly serves to cover costs, but the objective is not to obtain large profits, but to develop and strengthen the Social Bazar.

The majority of the products that we find in the supermarket comes from big companies, since there are no local producers that supply these, or because offering ecological products would make prices go up, making them unattainable for some consumers; either that or they simply would not buy them, being unfamiliar with them. Yet, all the products of the cooperatives of the city of Van are included. These are principally women’s cooperatives and their top sellers are cheese, yogurt and jams, all home-made and organic. In the coming months, with the development of the producers’ guilds, new supermarkets are expected to be opened in other municipalities.

Another important initiative in the city of Van is the assigning of communal land to families with low or non-existent income. The project started with the construction of 24 greenhouses. Each greenhouse is shared by two or three families, depending on the number of family members. These families have the full right to use the fruits of the earth, and if they have surplus production, they can sell it to receive further income. In the case that the families cannot sell it themselves, the Economic Commission offers them help in the distribution and selling. Everything produced in those greenhouses needs to be organic and non-invasive to native crops. Another indispensable requirement to participate in this initiative is to be active in the Movement and to help the development of the solidarity economy. This initiative will generate long-term communal projects, like those we know in Europe.

The family greenhouses mentioned earlier occupy approximately half of the terrain belonging to a communal house, which has farmland of about one hectare. A part of the rest of the arable land provides the prime materials for the two women’s cooperatives currently working in the city of Van.

The timeline of the women’s cooperatives in the city goes right back to 2004, when the first cooperative of the region was born. It was not linked to the Congress of Free Women (KJA), but with the idea of furthering women’s economic freedom in the area. This cooperative produced textiles and made clothes of different kinds. But all work was destroyed in the devastating earthquake that shook the province of Van in 2011. The following year, the women put their hands back to work and created the first of the two cooperatives existing in Van today. Its products principally consist of yogurt, jam and cheese, which are distributed in the cooperative’s own shop, as well as in the recently inaugurated supermarket.

The second cooperative was opened hardly a month ago. We could go in and observe the women working with our own eyes. Its principles are very clear: to generate a solidarity economy that is communal and anti-capitalist. They are not trying to get rich, or aim for the exponential growth of the cooperative. They simply want to offer ecological, hand-made products for a price accessible to all. They aspire to develop a new economic model for the Movement, a model that is outside of the capitalist system and which gives economic power to the people.

At the beginning, they were not linked to the KJA (Congress of Free Women), but now they are part of the Economic Commission of the women’s organisation. The KJA is trying to create and unify different women’s cooperatives in this area as well as in other provinces of Bakur. The Economic Commission of Van also maintains contacts and supports women’s cooperatives elsewhere by distributing their products. The municipality of Van, controlled by the BDP, has allocated some of its budget to the cooperatives, and is renting the premises where the cooperative is working over the first six months.

It is a political cooperative in that all women working there are politicised. Some of them are delegates or committee members in the neighbourhood or village assemblies in the area. They literally told us: “The cooperative does not create the group, the political group creates the cooperative as one more tool in the struggle”.

The beginnings weren’t easy, but now more and more women are becoming members of the cooperatives all the time. They are women of all ages and from all stages of life. That’s why, in the first cooperative, they created a creche so that the children of the women who work there have their own space.There are more and more adolescents who help out after they finish school, or older women who prefer to feel productive and to spend time with their friends instead of staying at home and dedicating themselves exclusively to household tasks. Not all women need the money that they get, for some of them the space is about developing political views and communal relations; a place where they can feel like a part of a group and work for the Movement.

The second cooperative works for commissions. Its products consist of traditional local spicy pasta, baklava, pasta filled with meat in sauce, and jams. They get their ingredients from the vegetable gardens of the communal house on the outskirts of the city, so all products are 100% organic.

In this second cooperative, there are currently ten women workers. None of them is the teacher or boss of the rest, they all teach each other the tricks and trades of the profession. Everything is discussed in assemblies and decisions are taken by the assemblies as well. The work days are days of constant debate and learning. There is no fixed salary, the money is shared depending on how much they sold that day. The profit is divided into 11 parts, one for each worker and one part for the cooperative itself. Remuneration is also adjusted according to necessity: if one of the participants is financially in a fix, they discuss this in the assembly and the next time the person gets the money necessary to solve the issue, while the others get less. They see the wage system as capitalist and therefore do not try to have a fixed salary, not now and not in the future; rather, their goal is to expand the social and communal economy. They don’t spend any budget allocations on advertisements: their best marketing is word of mouth. The majority of their consumers are people who participate in the Movement and they know that by buying there they are supporting the initiatives created by the friends, strengthening the Social Bazar.

Despite the enormous advances made in the process of creating the Social Market, the participants in this recognise that they are in a test phase and that these are experiments. The structures are not fixed yet and a lot remains to be learnt, which needs time and effort. They told us that every document that can help them improve, learn and deepen the development of the cooperatives and ecological production will be a great help to them. If you have materials like this that can be of help, you can send it directly to our collective so that we can hand it over to the Economic Commission of the DTK and put you in contact with them.

Sara A. (Delegation of Rojava Azadi in Bakur)