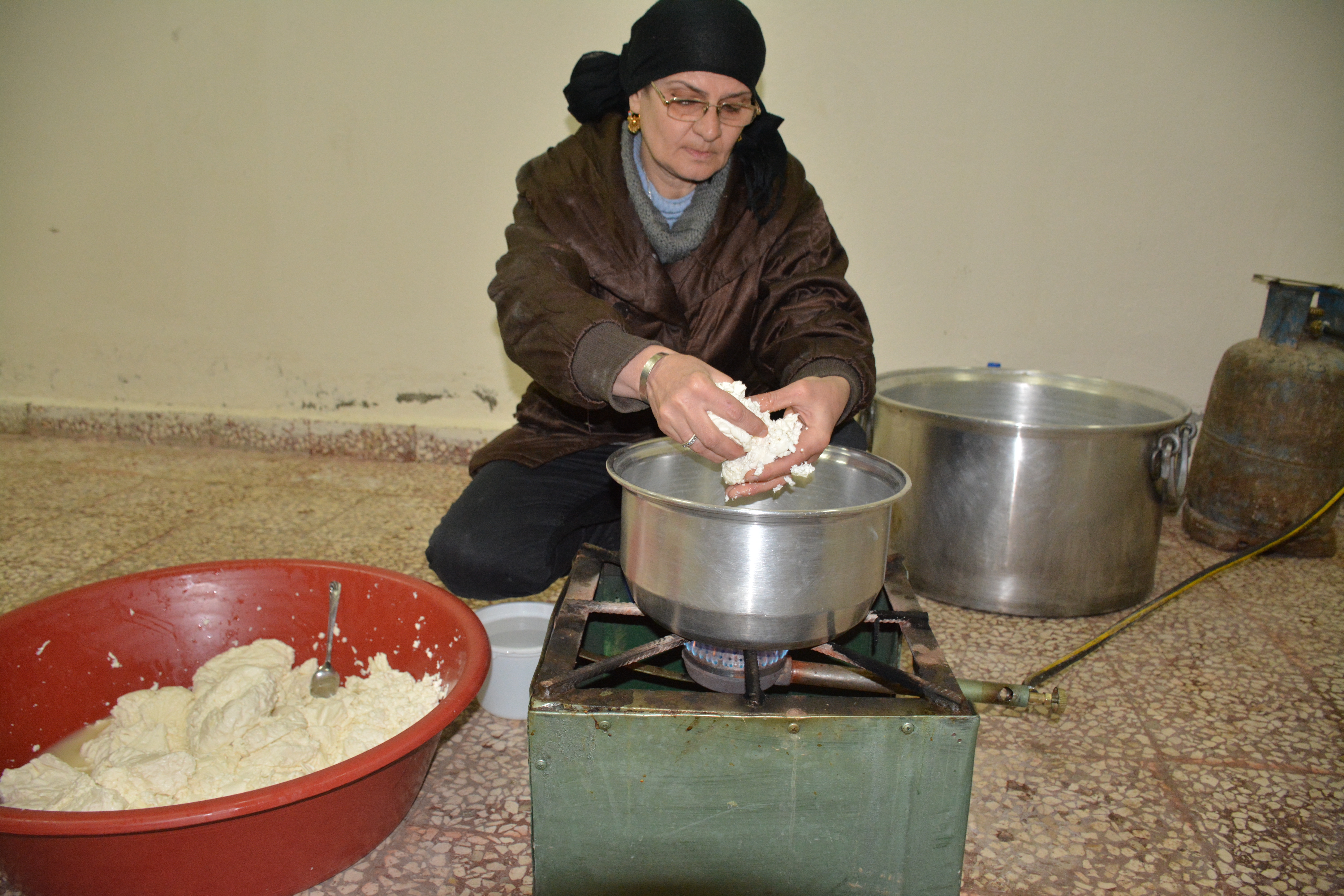 Since its inception, The Centre for Women’s Economy has been supporting projects and cooperatives that are connected to women. Women in Rojava have proven that they are able to manage economic projects, whether agricultural or industrial. After their success in these cooperative projects, the Centre for Women’s Economy has begun to expand them. Their role is to improve people’s living standards and the economy of the region, and to help Rojava achieve self-sufficiency. The yogurt and cheese project is one of the important new and projects in the city of Qamishlo [Qamişlo / Qamishli / Al-Qamishli].

The Centre for Women’s Economy supplied the factory equipment

The Centre for Women’s Economy has been preparing for the Milk Cooperative after discussions about some proposals made by some of the members of Kongreya Star. The Centre found the place for the project in the Al-Antariyah neighbourhood. Equipment was brought, consisting of twelve refrigerators to store the cheese and yogurt, large containers and burners to boil the milk, as well as pots, buckets and other necessary equipment to preserve the products. The factory has also been supplied with electricity and water. Work began in the factory at the end of last February.

Kulsar Mohammad, a member of Kongreya Star and supervisor of the Milk Cooperative, highlighted the importance of the project by illustrating its main targets. She said, ”Kongreya Star is working to organise many projects that address women─whether social, cultural or economic. It established the Centre for Women’s Economy in order to support the economic projects and cooperatives connected to women. We, as members of Kongreya Star, decided to open a dairy factory in Qamishlo after its success in Derik, and that’s why we are preparing for it in Al-Antariyah neighbourhood in Qamishlo.”

Kulsar added, ”We are still at the beginning of the project, and so far we have been using only cow milk, but we will get goat milk and sheep milk in the future to use them for making yogurt and cheese. We are also getting a lot of milk from the livestock cooperatives that belong to The Centre for Women’s Economy whenever it is available. Therefore, we should increase the workers and the number of shares. Our aim is to supply the market with yogurt and cheese at competitive prices and reduce monopoly and exploitation, because we sell the cheese and yogurt products at a price of 100 SYP per kilo less than the market.”

The number of workers and production rates

There are twelve women with limited incomes working in the dairy cooperative, from both the Arab and Kurdish communities. Six women paid for all the shares of the project, 25,000 SYP each, while the other six women couldn’t pay because of their financial situation. Work has been divided among them; some women boil the milk and some pour them into the special yogurt buckets, while others make two kinds of cheeses, regular cheese and mshalalé. The women clean up together with high spirits and sense of humour.

Cow milk is being bought from the adjacent villages. The daily amount of milk bought varies between one to 1.3 tons. It gets divided after boiling and purifying. Yogurt is made with the first half and cheese with the second. Some of the buckets of yogurt are poured into clean white cotton cloth to make labneh (strained yogurt), and the leftover cheese liquid is poured into special bags in order to make ‘lork’ which is a popular Kurdish recipe. Distribution to shops, supermarkets and other institutions is done according to demand, by vehicles that are equipped with refrigerators, especially designed for food products. About 750 buckets of yogurt are sold daily.

Feryal Mohammed, a worker in the cooperative, said in an interview, ”We participated in this project through Kongreya Star, and we are happy to do so as this will help us to manage the high costs of living. We are also proving our ability to work outside of the household. I let my sister join us as a member of the project too. Both of us are from needy families and our financial situation is bad. We are cooperating with our other sisters here and work hand in hand.”

Camila Muslim, another worker in the project who is from Kobanî [Kobanê / Ayn al-Arab], talked about the kind suffering that she has gone through in the last two years, and about her need for work─especially after being widowed ten years ago and left alone with many children who need care. She thanked the members of Kongreya Star who created this opportunity for her to work in the project, and allow her to provide care for her family and cover their needs.