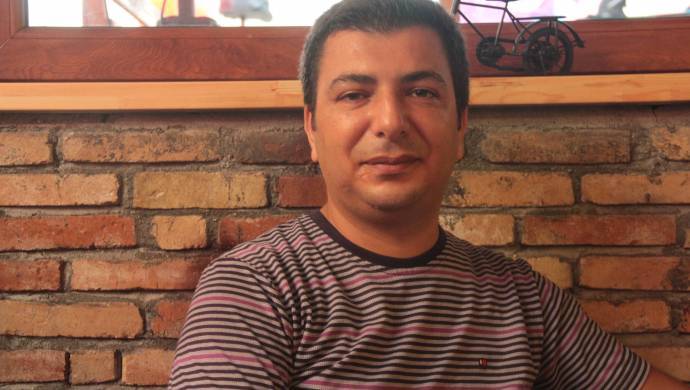 Mersin – Making assessments regarding the economic crisis that has ensued from the interior and foreign policies of the government, Associate Professor Selim Çakmaklı argues that “The classes that control production also control politics. The antidote to this anti-democratic rule is the workers’ cooperative.”

Associate Professor Selim Çakmaklı, who was discharged from Mersin University by decree for signing the petition ‘We will not be a party to this crime’, answered the questions of Mezopotamya Agency regarding the economic crisis and foreign policy. As a resolution to the deepening crisis, Çakmaklı proposes workers’ cooperatives.

How should we evaluate the economic situation, considering the loss in value of the Turkish Lira compared to the Euro and Dollar?

Firstly, I should emphasise that the Turkish Statistical Institute (TSI) and Central Bank are the main sources of data for economists. However, recent changes to their calculations have made it difficult to follow the long-term performance of the economy. An analysis we made in 2010 indicated a slowdown in potential growth. On the other hand, the national income calculation of the TSI depicted a dynamically growing economy, almost as if pulling a rabbit out of a hat.

I think it is wrong to make predictions on the trajectory of the economy based on daily price fluctuations (in the Euro, Dollar, etc.). This can lead to various erroneous assumptions. It is better to look at more structural indicators. For instance, unemployment has risen above ten percent since June, and the number of unemployed is over three million. The situation is similar for faculty and college graduates. It is worse for graduates of basic scientific disciplines. If you consider working conditions and workplace murder [as opposed to accident – OA] alongside figures of unemployment, you can get a clearer picture. On the other hand, even President Erdogan has spoken about the profits of banks. The appreciation of the values of the Dollar and the Euro are results of such structural weaknesses in the economy. The most important of the deeper problems is the distribution of wealth. The ten percent rate of unemployment, the daily flow of workplace murders and the profits of banks that reach up to forty percent show sharp injustice in wealth distribution.

The IMF made predictions on the economy following the Medium-term Program. The credit rating agencies also give negative assessments. What do the statistics show?

Statistics are one thing and the realities of life are another. If the rate of unemployment is increasing with economic growth, there is a serious problem. Independent social scientists define this as growth that does not create employment. One thing that should also be noted is that small- and medium-sized firms in the industrial sector are growing less than their large-sized counterparts. This prevents the creation of sufficient employment. This is not specific to Turkey. There is a large army of reserve labour around the world that has emerged with the introduction of machinery. Developed countries do not generate sufficient employment or income. In the US, the rate of unemployment is decreasing, while debt per household is on the increase. Much of the increased employment is a result of part time work.

At this point, perhaps it is necessary to think of a new model and enact it. This model is the workers’ co-operative that is ruled by the workers and serves the needs of the local community. This model can strengthen local economies and serve the ideal of a just and peaceful future.

What is the impact of the internal and external policy of the government, diplomatic crises and surrounding wars on the economy?

First of all, these dirty wars have historical and political dimensions. We are living through a process where the official ideology is imposing itself once more following the elections of the 7th of June. Additionally, we are reading more news about the military industry in the mainstream media.

In the process leading to the 7th of June, there was a significant uprising of the working class, particularly in the facilities of the industrial sector in western towns. This class reaction could be seen in the election results. However, the response of the capitalist class was equally drastic. The photograph taken at the Presidential Palace shows the unity of all of the different capitals against the working class. In the following referendum, the working class once again rallied all its constituents to make an impact. However, the main opposition party could not read this revolt, and ─ barring an unsuccessful March for Justice ─ was pushed to a passive position. The president admitted this class-wide rebellion at a meeting of the Turkish Industry and Business Association (TUSIAD), where he said that strikes were easily prevented due to the State of Emergency.

At the opening of the parliament last week, the main opposition party did not show any effective opposition apart from appearing to be upset about not being included in this photograph. It is itself part of the picture. In this sense, the war is a class issue and is waged against the working class. The ones that are harmed the most by this are the peoples of the region.

Following the independence referendum, there is talk of an economic embargo against the Kurdistan Regional Government [KRG] region. Could the crisis-ridden economy handle this?

I think a solution that does not damage trade relations between Turkey and the KRG can be found.

What kind of a change in social classes does the deepening of the crisis make?

The effect of the global crisis in the world economy, which has been continuing since 2007-8, has shown sharp social effects in recent years. As of now, it is not possible for political formations to garner support unless they openly declare their class positions and openly distance themselves from capitalism. All societies are clearly flung towards two extremes. On the one hand there are neo-fascist groups protected by the state, such as those in the USA (or Bahceli and his followers who pose for photos with guns in their hands), and more radical Left groups on the other, as seen in the example of Jeremy Corbyn in the UK. It is clear that this division is plain to see in many countries. In the Turkish context, it is unclear when the fear will be overcome. Preventing right-wing ideology from seeping into every cell of the society would create hope for an exit.

Considering the political and social developments, what kind of a solution do you suggest?

The classes that control production also control politics. Therefore, we need a new organisation in the sphere of production to get us out of this darkness. The nature of profit accumulation is not really considered in education in economics. Once we conceptualise the accumulation of profit and make it part of our analysis, you can see that the utopian neoclassical view of full competition is not possible, as there will be a tendency towards monopolisation. Also, the maximisation of profit in order to accelerate the accumulation of capital is anti-democratic in nature.

The ‘firm’ that we take up in economics and teach our students is actually an anti-democratic unit. A small group at the helm of the firm decides what is to be produced, and the how and where. The workers of the firm do not have a role in these important decision-making processes. They are the last thing to be saved in case of a fire. The antidote to this anti-democratic unit at the base of the system is the workers’ co-operative. For instance, the founder of the beer firm Modern Times that is active in San Diego, USA, explains that his successes have come from the transfer of shares to the workers within a co-ownership model. This transformation has also changed the values and culture of the company. We can see an increase in such examples worldwide, as well as in Turkey. Our hope can only be carried over into the future as long as such organisations are founded that can remain afloat without the profit motive and the exploitation of labour that in the monopolised world.