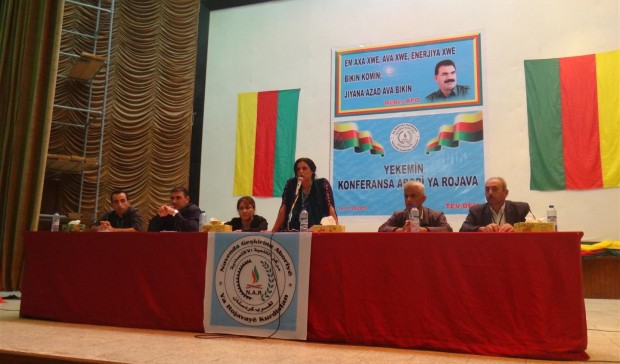 It was held on 16th October at Aram Dikran Cultural Center in Rumelan [Rumelan / Rimelan / Ramelan / Rmelan / Rmeilan] under the banner ”Let your soil, water and energy become the source of a free and democratic life.” It was attended by 250 representatives and presidents of the three cantons, and many guests.

It continued for two consecutive days, during which the attendants discussed the reports from the agricultural, commercial and industrial committees in the three cantons, in addition to the women’s economy report.

In the reports there was a summery of economic activities in Rojava and problems and obstacles facing the committees. There were also some proposals which were thoroughly discussed by the participants.

After long discussions they concluded with some proposals concerning different areas of the economic sectors, some of which were:

On the organizational structure:

– To put a legislative and legal mechanism to regulate the relationship between the committees and the economic bodies.

– Form a joint coordinating body for social economy that consists of 11 members representing the economic commission, the economic body, the agricultural body, the supply authority, council of municipalities, institutions of civil society and the committee of women’s economy.

– Form a joint coordinating body for economy between Rojava cantons.

– To make plans to reduce poverty and securing jobs for the unemployed.

– Form economic commissions in the cantons.

– Activate the role of women in all economic activities.

– Activate the role of women to cut down emigration.

– The participation of women in all institutions, committees and economic activities is a must.

On agriculture and livestock:

– Create an integrated structure and form a joint coordinating body of all the agricultural institutions.

– Prepare for agricultural planning in Rojava.

– Establish research and development centres and support the existing ones.

– Establish and institution for seeds in all the canton, centre for census, factories for the manufacture of bags, yarn and other agricultural supplies and fertilizers.

On industry and trade:

– Adopt the system of workshops to develop industry.

– Develop industries that are based on agricultural products.

– Establish academies of art and industry.

There were more decisions concerning cooperatives, most importantly decisions to establish the system of cooperatives for the democratic self governance and enforce regulations for their operation.

The conference ended with a speech by Haifa Arbo, a member of The Movement for a Democratic Society TEV-DEM, stressing the values of work ethics and having high sense of responsibility to develop the economic reality.