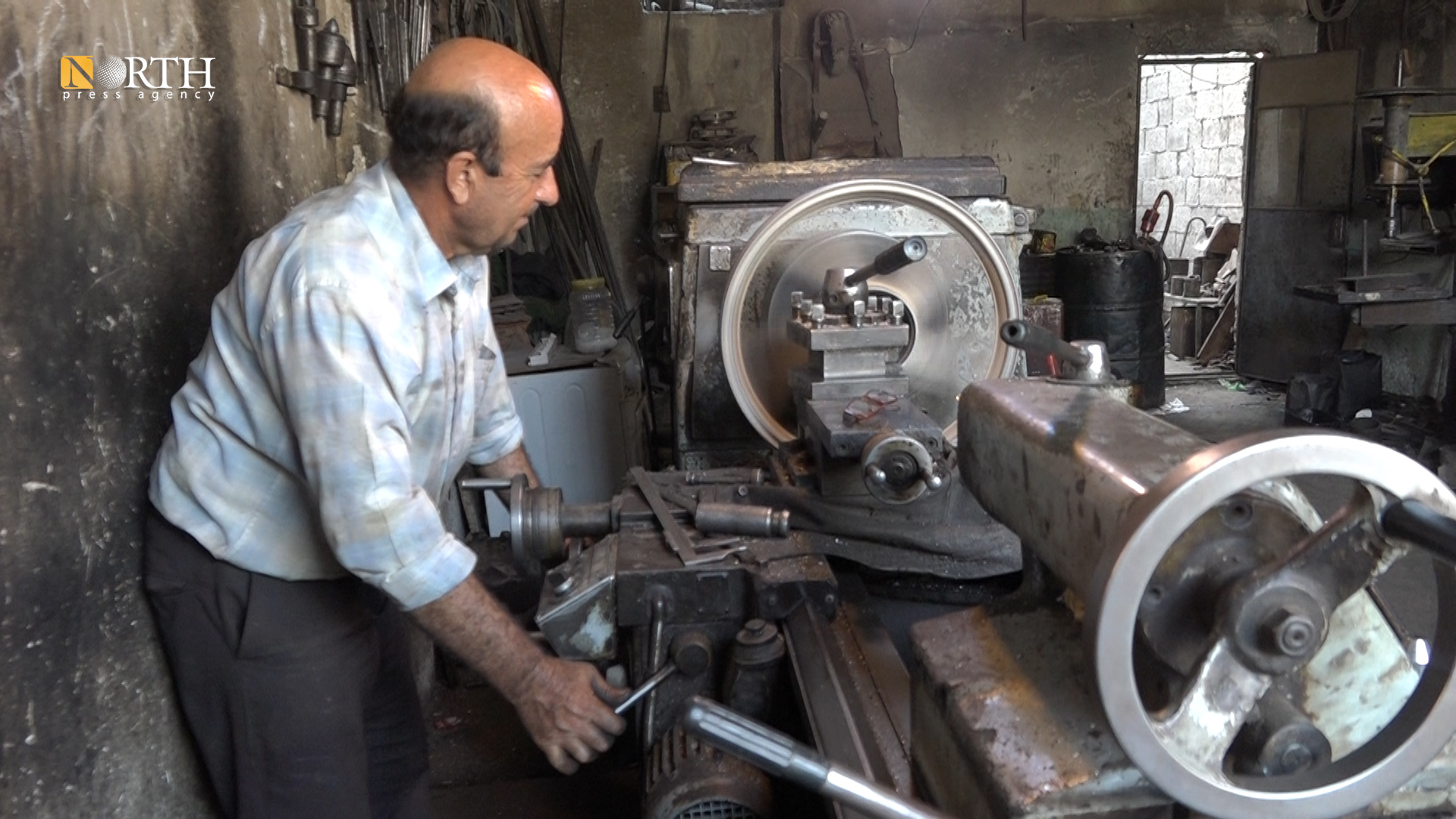 Sobhi Hammoud, an industrialist in the city of Manbij in northern Syria, is behind one of the lathes he has been working on for nearly 40 years, and says that he plans to pass on the profession on to his sons after the development and popularity of the industry in the city.

Before and during the war years, Hammoud preferred his children not work in this profession because he did not see a future in it, “but now the situation is different and I am seriously considering teaching them.”

Hammoud believes that the city has flourished recently and is famous for its industries, despite the popular belief that Manbij is a village or sparsely populated region.

Hammoud’s customers come to him from all regions of northern and eastern Syria, in addition to his customers in the city and its countryside, due to the availability of tools and equipment there.

The city of Manbij is now one of the most important industrial centers in northern Syria, as it is a transportation hub and sits on a commercial road linking the Autonomous Administration held areas with the areas of the Syrian government, in addition to opposition-held areas in northern Syria.

The industrial zone in Manbij is home to about 250 shops for various types of professions, including blacksmithing, the manufacture of agricultural machinery, tankers, and tractors, and the maintenance of cars and electric generators.

Ahmed Shams al-Din, a merchant and owner of a pistachio cracker in the western countryside of Manbij, says that his facilities for cracking, cleaning, and packing pistachios for export are the largest in northeastern Syria.

Shams al-Din has been working in the pistachio trade for nearly ten years, and opened his facilities two years ago in the village of Asaliya, 20 km north of the city.

He buys pistachios from farmers and traders in the markets, sorts them, cracks them, and packs them in bags for marketing in Syria and Gulf states.

Shams al-Din complains about the damage to his trade this year due to the closure of roads and crossings linking Manbij with the rest of the regions, as he exports thousands of tons of pistachios every year.

His facility usually produces about 2,000 tons annually, but today he is forced to stockpile his production in warehouses, waiting for the crossings to reopen or to leave production for the next year, with the possibility of incurring massive losses.

Manbij is connected with the rest of Syria through three main crossings: Aoun al-Dadat to north of the city and Umm Jalloud to the northwest, linking it with opposition-held areas, and al-Tayha crossing, southwest of Manbij, which links it with the government-held areas.

Abir al-Akla, the co-chair of the Economic Committee in Manbij, said that the city has become the most important industrial area due to its important strategic location and role as a commercial gateway to the regions of northeastern Syria.

Since the start of the protests in Syria in 2011, a large number of industrialists have fled from the rest of Syria, most notably Aleppo, towards Manbij.

The number of factories licensed by the Economic Committee in Manbij is 488, including 160 food manufacturing facilities, 130 cinder block factories, 150 facilities for the manufacture of hoses, ice blocks, and paint, in addition to two pharmaceutical factories and 11 sifter machines for legumes.

According to al-Akla, the city includes five industrial facilities that are not found in the rest of the regions, which include a factory for chips and other snacks, an iron smelting factory, an oxygen canister factory, and a pharmaceutical factory.

The population of Manbij, after the arrival of the displaced from other Syrian regions, has reached 1,200,000, despite it not exceeding 200,000 people in 2014 – an increase of 500%, according to the co-chair of the Economic Committee in Manbij; the city also boasts 3,000 industrial workers.

Traders can export their products to the rest of the regions if there is an overflow in the local markets after obtaining a commercial register from the Chamber of Industry and Commerce in Manbij, according to al-Akla.

Al-Akla attributed the increase in production costs of locally manufactured goods to the halt in exports and imports due to the closure of the crossings by the Syrian government and the opposition factions.