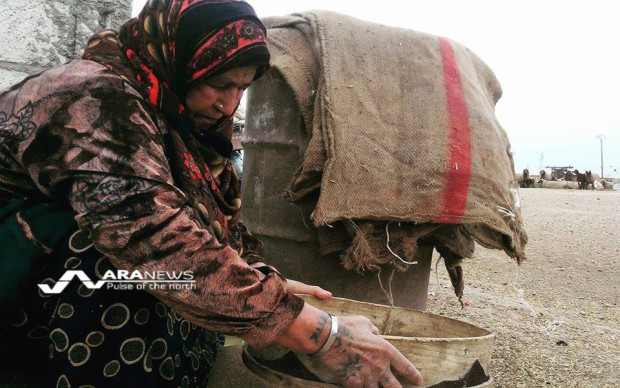 Note: The fundraising campaign mentioned in this article has officially finished, however, it is still possible to donate to the project and work is ongoing. See the Rojava Plan website to donate and for further details and updates.

MALMÖ – The Syrian Kurdish region, known as Rojava, has been for long the bread-basket of Syria. However, a 50 year wheat monoculture, the embargo and the fiver-year war have obstructed the production of food. “The Rojava Plan”, part of Rojava economic committee, has initiated a project called “Feed the Revolution – Organic Agriculture in Rojava” which aims towards developing Rojava’s self-sufficiency of food by building its own facilities for the making of organic fertilizers.

According to experts, the land of Rojava is potentially very fertile, but while the Syrian regime controlled the area they imposed a wheat monoculture heavily dependent on chemical fertilizers. This has led to the fertility of the land now being deprived of nutriments. Neglection of the long-term effects of losing the fertility of the soil due to a lack of crop diversity and chemical imbalances has created huge challenges.

The wheat monoculture in combination with the recent embargo imposed on Rojava has resulted in a 60 percent drop in harvests, which threatens to starve the population. And since the government of Iraqi Kurdistan (KRG) closed its border with Syria’s Kurdish region of Rojava, the necessity of complete self-sufficiency has become urgent. According to the organizers, the campaign “Feed the revolution” challenges the embargo set on Rojava as it aims at building its own facilities for the making of organic fertilizer and the work has already started.

“Enabling the production of organic fertilizers does not only solve the food problem and develop self-sufficiency, but it also allows Rojava to continue its disengagement with capitalism and promotes an ecological way of life,” the organizers claim.

Speaking to ARA News, Shivan Baran, spokesperson for the Rojava Plan, said: “Our plan is to build facilities here that will produce organic fertilizer from the natural waste of the local population; from egg shells to tea leaves to manure. We are working within the movement to give education to teachers who will then teach the local population about the importance of separating their waste and about the direct and indirect benefits of composting.”

”This system of educating will be easy, as the people already organize in their neighborhoods in accordance with the grassroots level of participatory democracy of confederalism. Our aim is that the people of Rojava will no longer need to rely on capitalist trade from countries which want to dissolve the revolution or on corporations which will demolish the truly democratic system which works in favor of the people and for their autonomy,” he said.

The ongoing war in Syria and the embargo caused by the borders’ closure from the Turkish and Iraqi sides are leading to practical challenges throughout all levels of society from education and energy production to construction and agricultural developments, which leads the Auto-Administration  of Rojava to constantly needing to prioritize. In order to meet the farmers requirements of fertilizers the organizers estimate that the project needs a €180 000 investment. To finance the project The Rojava Plan has started a crowdfunding campaign which is an internet-based fundraiser. The investment is expected to cover all expenditures including labor force, machinery and factory buildings.

“We started a crowdfunding campaign for this project for many reasons. One of the main reasons is that Rojava needs solidarity from the rest of the world’s people. The current political situation in Rojava is incredibly volatile – the silent war on Kurds in Turkey threatening to spill over into Rojava, the Turkish influence on the KRG region affecting the whole Kurdish cause and political stability in Iraq and therefore affecting Rojava, the constant threat of attacks and advances from ISIS, the growing tension with the Syrian regime, and the unknown position of NATO states on the Syrian war,” Baran told ARA News.

“This all contributes to the need for Rojava’s newly declared federation to be recognized by the rest of the world. Not only does the crowdfund provide a chance for the project to begin without delay from lack of money or hesitation from the risk of unknown success, but it also spreads the messages of the revolution to the rest of the world, building solidarity from grassroots level, which is the key to social and political change everywhere.” he added.

During the past few years several similar fundraisers have been initiated, both regarding the reconstruction of Kobane and for the support of energy production in Amuda City. So far the crowdfunding campaign “Feed the revolution” has raised more than €25 000 and engaged hundreds of people around the world. Amongst them are the group “Allt åt alla”, an extra-parliamentarian socialist organization with about ten local groups across Sweden.

Speaking to ARA News, Daniel Kastanj from Allt åt alla’s group in Malmö said: “We are very happy to be a part of the developments in Rojava. Last year we organized a successful crowdfunding campaign to replace worn out parts in electricity generators in Amuda, a city in Rojava. We think it is of the utmost importance to support the ongoing revolution in a concrete way and we hope to see the revolution spread, not only in the middle east but also to Europe.”

“We have learnt so much from what’s happening in Rojava, which wouldn’t have been possible without involving ourselves in the nitty gritty that these projects entail. The spirit of solidarity is of course also crucial to build large, diverse movements. Solidarity enables us and other groups to connect around common interests and desires to change society despite our differences,” Kastanj said.

Over the past six months, The Rojava Plan has reportedly worked in the preparation of 26 different projects that the Economic Committee has approved as vital to the development of the social, political, and ecological revolution of Rojava, northern Syria. The project of building facilities for the making of organic fertilizers has already started with borrowed materials and equipment from all types of cooperatives and small family-run businesses across Rojava until the crowdfunding campaign is complete.

“We have now started by leveling out the land where the facilities will be built.” Baran concluded.

Note: The fundraising campaign mentioned in this article has officially finished, however, it is still possible to donate to the project and work is ongoing. See the Rojava Plan website to donate and for further details and updates.