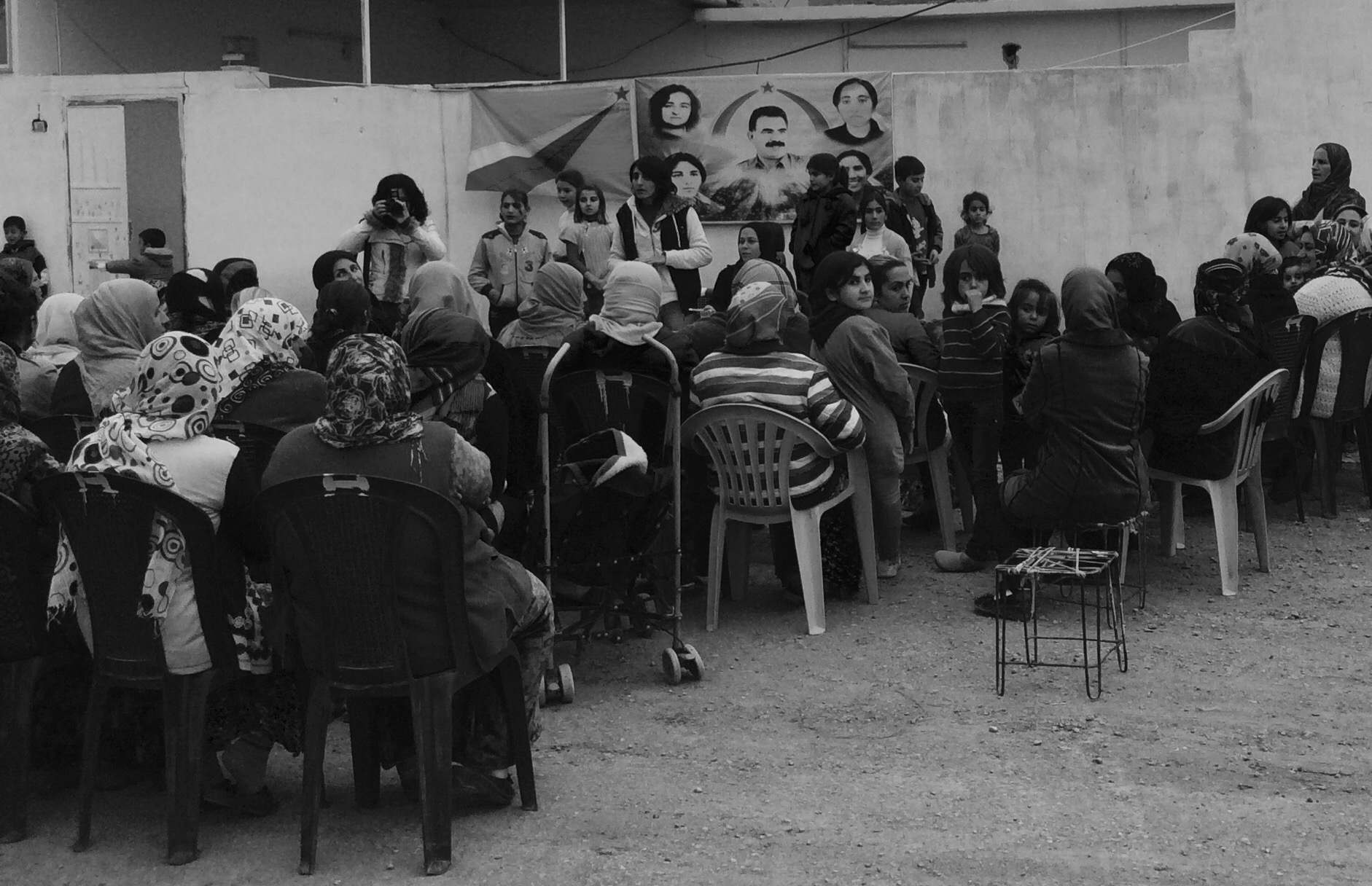 A Revolution in Daily Life

Across the domains of government in the canton of Cizire, people are working, mostly on a voluntary basis, to make ambitious transformations to society. Doctors want to build a modern free healthcare system but also, they told us, to collect and disseminate suppressed local knowledge about healing and to change the conditions of life in general. They aim, they said, to build a way of life free of the separations – between people and between people and nature – that drive physical and mental illness. Academics want to orient education to ongoing social problems. They plan, they said, to abandon exams and destroy divides between teachers and students and between established disciplines. The new discipline of ‘gynology’ [Jineolojî] (the science of women) constructs an alternative account of mythology, psychology, science and history. Always and everywhere, we were told, women are the main economic actors and those with responsibility for ‘ethics and aesthetics’, ‘freedom and beauty’, ‘content and form’. The revolution aims to overcome the limits placed on these activities when the State is taken as a model for power.

It was repeated to us again and again that the coexistence and coordination of changing cross-cutting pre-existing identities is to replace ‘one flag, one language and one nation’. The new administration is composed of quotas of representatives from Kurdish, Arab and Assyrian communities, nominated according to their own practices. Although the militias and security forces are ethnically mixed, Assyrian groups have their own battalions. Everyday life has changed most for women, who were previously restricted to a life indoors. Although the streets are still mainly the province of men, women have set up their own education structures and their own local councils. All mixed political bodies must be 40% women and all co-representatives must include one woman. Women are thus both autonomously organised within the revolution and its archetypal subjects. The billboards in Qamislo show the YPJ’s women fighters more than YPG’s male ones. ‘We will defend you’, one reads.

Members of the YPJ spoke to us about the non-hierarchical organisation that exists within the militias. There are elected commanders, they said, but they participate in all the activities of communal life in the same way as everyone else. But it’s not all love and post-structuralism. Discipline is also an important part of the ethics and aesthetics of daily life. The women we saw being educated as security forces (Asayish) were taught sitting in rows. It was a bit of a shock on the first day of our tour, to be greeted by a line of trainees in uniform, standing with perfect rigidity in a line doing that call and response thing armies do, precisely and very loud. YPG training videos, set to music, play on every TV. Even in the University, where young people live collectively, cooking and cleaning-up happened in a super efficient way: tasks are performed efficiently, divided up between everyone, so that equality and horizontality and automatic discipline overlapped perfectly.

Another ethic and aesthetic ambiguity surrounds the significance of the PKK’s Ocalan, or ‘Apo’ (the name for him people more commonly write on walls and carve into their guns). His picture hangs on the wall in almost every room. The ‘libertarian turn’ of the PKK, with which Rojava’s PYD are affiliated – its renunciation of hierarchical structure among other things – was initiated by him. It is interesting to note, that it was also after a period spent in this region, before his arrest in 1999, although he is always attributed with coming up with the ideas. The other images that adorn walls, dashboards and plants are those of martyrs – their faces against a coloured background that denotes their organisation. Is it significant that Ocalan is the only person still alive to be given this honour and a leader with whom no one can communicate directly and with no de facto power?

The point of the revolution, many people told us, is not to replace one government with another, it is to end the rule of the state. The question, the co-president of the Kurdish National Congress put it, is ‘how to rule not with power but against power’. State power is being dispersed in a number of ways. The education of people as Asayish is taking place on a large scale, with the aspiration that everyone will receive it. It is part of an attempt to diffuse the means of coercion to everybody. People’s self-defense, were were told, is ‘so important that it can’t be delegated’. Through education (not only in the use of weapons but also in mediation, ethics, the history of Kurdistan, imperialism, the psychological war waged by popular culture and the importance of education and self-critique), the fighter in charge of one training centre told us, the aim is to finally abolish Asayish all together.

The new administration (with a parliament and 22 ministries), appointed for now by various political parties and organisations but to be eventually be elected, has taken responsibility for some state functions. When in spring 2012, ISIS reached Rojava, anticipating the carnage of a confrontation between ISIS and Assad and seeing the opportunity in the situation, the Kurdish forces surrounded the Syrian state forces in Derik and negotiated their departure (without their weapons). After consultation with other political and social forces in the area, the same happened across Rojava. However, the Assad regime has not been completely ejected. In Qamislo, the largest city in Cizire [the Jazira canton / region], it still controls a small area which contains the airport. The old state also continues to operate in parallel with new structures. Syrian hospitals to the south still accept some of the very sick and the regime still pays some civil servant salaries including those of some teachers.

Meanwhile, the new administration is balanced by multiple autonomous elements. Separate from it, communes (weekly open neighborhood councils, with their own local defense units and sub-councils dedicated also to youth, women, politics, economy, public services, education and health) and city and canton-level councils consisting of delegates elected by them, deal with immediate practical problems that can be resolved immediately. Both the administration and the communes were set up by TEVDEM, a coalition of organisations including the PYD, co-ops, academies, women’s and youth organisations and sympathetic political parties. These organisations all have their own decision-making structures and sometimes their own education programmes in their ‘cultural centers’ ‘houses’ and ‘academies’. The result of all this, is both that all political forces have complex, cross-cutting reliances on each other and that there are plenty of meetings to go around.

Little existent agricultural or industrial production takes place in Rojava, despite its flat and fertile soil. The ‘bread basket’ of Syria, most of its land has been owned by the State and used for mono-cropping wheat and extracting oil. Its Kurdish population often immigrated to souther cities to form a class fraction working for lower wages. The new administration took the land and distributes portions of it to self-organised co-ops who are working to expand the farming of animals and to increase and diversify what is grown. It continues to extract some oil and to refine it into low quality diesel to sell in the canton and to distribute to co-ops and other institutions. What co-ops produce is sold either to the administration or in the bazar under administration price controls. The administration provides each household with a bread ration. Smuggling is huge.

Those overseeing these changes describe them simply as practical solutions to the problem of how to reproduce the population in the context of war and embargo. This is very different from how the immediate practical transformations to the domestic sphere were described. The women’s militia, members of the YPJ told us, ‘opened a space for liberation’: ‘You take part in life in a new way and, when you are with others, you realise that you are a power.’ And, they said, ‘when people saw us fighting alongside the men they also accepted us fighting against male-centric mentalities’. There was no talk about the positive empowerment came with the necessity of disrupting relations of exploitation and exchange. Perhaps this was because the people we were brought to talk to were mainly middle class, although this fact itself is also significant.

In some ways, opposition to the state is opposition to capital, on the level of its global force. The new administration opposes, as they see it, NATO in two forms: in one as Turkey-supported ISIS in one and in the other US and international capital (a category into which the KRG – where two ruling families now construct refugee camps along one side of their motorways and shopping centers along the other – also falls). They have no illusions about the motivations of those who give them military support: ‘Everyone, including the US now, portrays it as if we are on their side!’ TEVDEM laugh. But there is no opposition to value in its everyday form continuing to exist. Those that debunk the claims of over-enthusiastic western activists about the revolutionary nature of what is happening in Rojava are right to describe it instead as the building of a shield against today’s war and most brutal oppression, using, as well as an army, a new kind of ideology replacing that of national liberation(2).

The situation also has something in common with the sad trajectory of struggles around the world in the past few years. The state, now an agent of global capital, is seen as the guilty party by movements composed of middle as well as proletarian classes. Meanwhile, the nation is seen as the force to oppose it. Struggles rally under the ideology of citizenship (and the race and gender hierarchies this presupposes). The transformation taking place in Rojava rests to some extent on a radical Kurdish identity and on substantial middle classes contingent who, despite radical rhetoric, always have some interest in the continuity of capital and the state.

Yet, at the same time, it also shares something with the high points of the struggles of the crisis: its riots. In some ways the strategies employed in Rojava were born from analysis of the failure of riots: in 2004, only months after the PYD formed, an uprising of Kurds demanding political freedom from the Syrian state met not only with immediate torture, murder and imprisonment but with a long period of brutal oppression. We decided, they remembered, we would not make the same mistakes again.

What is taking place is not communisation. But it is a real movement against state plunder and coercion – fighting both militarily on its borders and inwardly through the diffusion of power within them. The limits of the struggles in Rojava in this sense are those of struggles everywhere where the relation between labour power and capital has become a matter of repression and struggles that take that repression as a starting point. It is another struggle taking place far from the strongholds of capital’s reproduction and not directed at over turning relations of exploitation. What will be interesting in Rojava, for now largely cut off from the force of global capital, is what struggles will emerge over relations of exploitation… over the distribution of land, over assignment to different kinds of work, over prices and wages, over imports and exports. What transformation of property and production relations will women demand as they return from the militias?