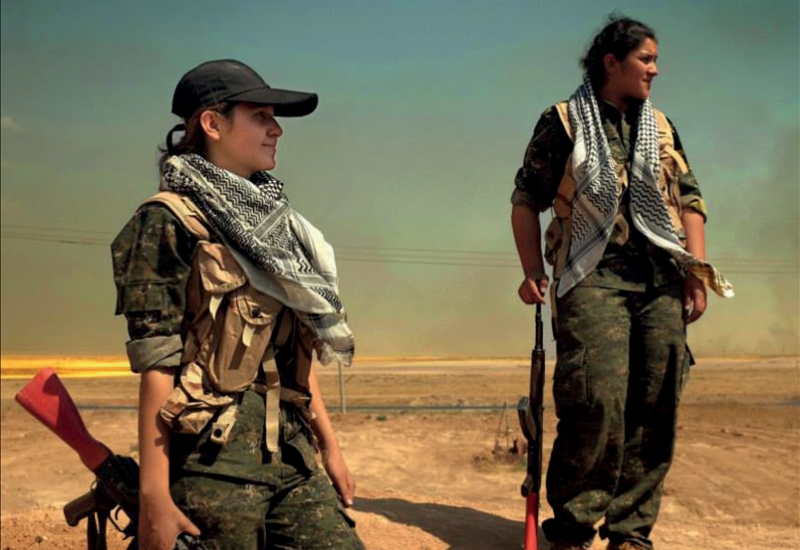 Anja Flach, Ercan Ayboğa and Michel Knapp are longtime activists in the Kurdish freedom movement, working in Germany and Turkey. Together they visited Rojava in May 2014, and with their language skills, contacts and knowledge of the Kurdish movement, they were able to do close fieldwork for a full month. Upon their return, they compiled their observations into a book, Revolution in Rojava, published in German in March 2015. They have made subsequent visits to Rojava and updated the book. In its revised form, Revolution in Rojava is published in English by Pluto Press in October 2016.

Below is only a small part of this interview, the part most relevant to the cooperative movent. Read the full interview here.

Michel, the book contains a detailed account of Rojava’s “social economy,” based on cooperatives. Why did they choose this system? What kind of cooperatives did your group visit?

Michel: Many times when we asked friends in Rojava about that topic, they told us something like: “there can’t be real democracy without democratic control over all sectors of society, including the economy.”

The concept of a “social economy” was developed on the basis of Democratic Confederalism’s form of socialism, as distinguished from both neoliberalism and state-socialism. Their critique is that the development of the economy independently from society led to the establishment of exploitative states and finally to economic liberalism. In contrast, state socialism, which diverged from its own economic ideas, made the economy part of the state and turned everything over to the state. State capitalism isn’t very different from multinational firms, trusts and corporations.

In the social economy, production is to be administered neither by a state nor by the market but through the communes and the councils, which as institutions of self-representation are in a position to know the participants’ needs. While there is a market, the ideal of a communal economy projects its meaning to the exchange between councils. The cooperatives are connected through the councils’ economic commissions at all levels, and they should be able to fulfill the people’s needs for fuel, gas, flour, foodstuffs and other products of the communal economy. They are to build up federations to fulfill the needs of the population.

Cooperatives exist in all sectors of society, even the oil refinery sector. Most of the cooperatives we visited were small, with some five to ten members producing textiles, agricultural products and groceries, but there are some bigger cooperatives too, like a cooperative near Amûde that guarantees most of the subsistence for more than 2,000 households and is even able to sell on the market.

In a sense it’s an advantage for this process that the Syrian state treated Rojava as a classical colony. Resources were extracted but almost no production took place. To fulfill the demands of the people of Rojava, industrialization around ecological and communalist principles is being planned, but due to the war and the economic embargo, it hasn’t been realized yet.