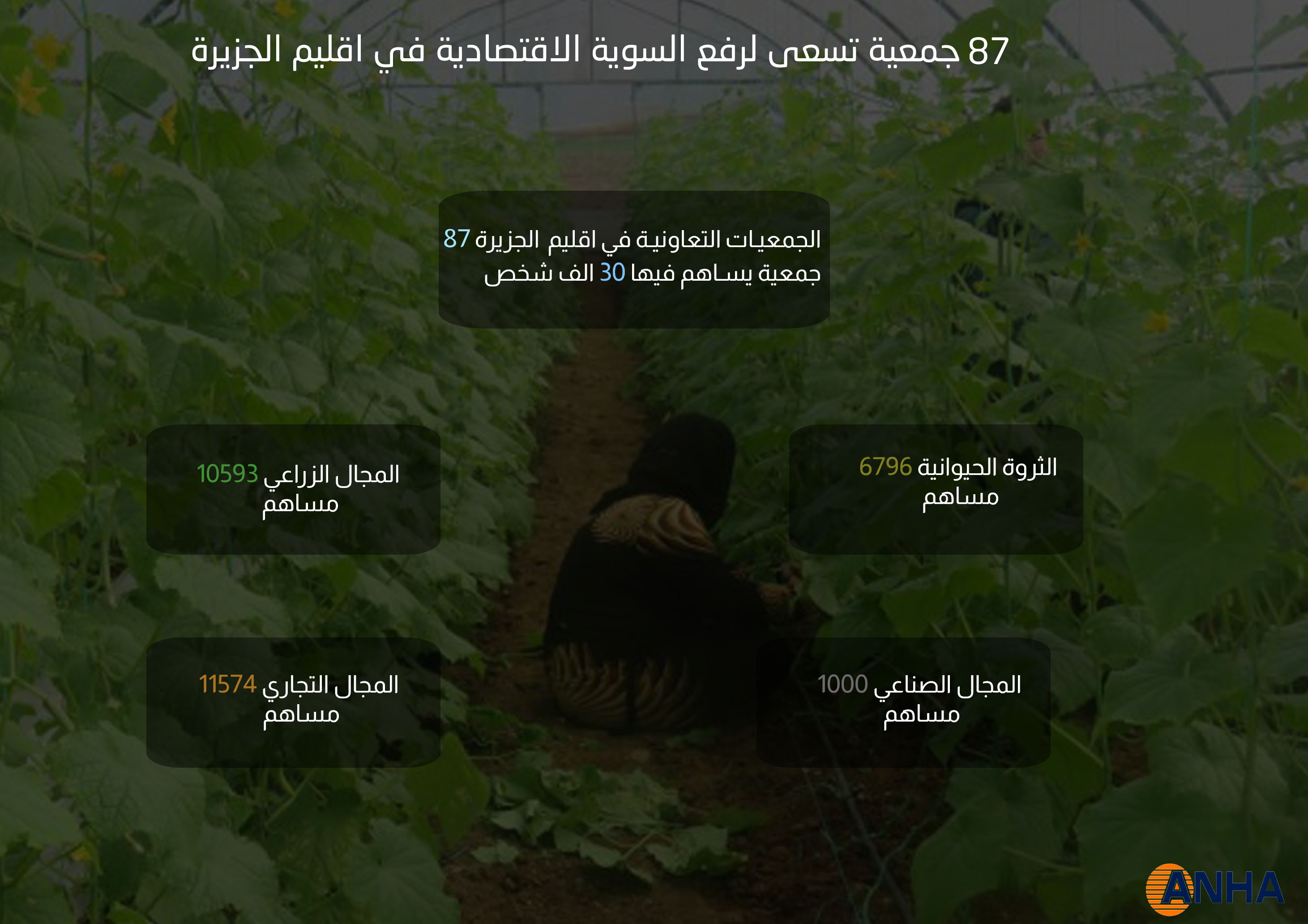 There are now 87 co-operative societies in Jazira Canton [Kantona Cizîrê‎ / Cezîre], with 30,000 participants [members] between them. The co-operatives provide work opportunities to all the participants, some of whom work in turns by taking three month shifts. The co-operatives have been playing a big role in providing supplies for the markets, stabilising prices and overcoming monopoly.

In Qamishlo [Qamişlo / Qamishli / Al-Qamishli], the co-operative societies have been trying to improve the economy and create jobs.

Rojava relies on participatory economics. Many co-operatives have been formed since the start of the revolution. However, many of these co-operatives have been small, and couldn’t meet certain expectations because of the lack of experience in this field, and also because most of the economy is controlled by the central government.

The policies of the central government prohibited building big factories and establishing big co-operatives which would contribute to the economy and increase people’s income, and this led to a lack of practical experience in running co-operatives in the region.

Nevertheless, co-operatives have been spreading across most of Rojava and Northern Syria, and after a few experiments of establishing small co-operatives, there are now 87 co-operatives.

The co-operatives are diverse─ livestock, agriculture, industrial, commercial─and they have almost 30,000 participants between them.

Agricultural co-operatives include those that are specialised in planting vegetables and grains, greenhouses and animal feed. They have 10,593 participants, and the price of shares cost between 10 and 70 thousand SYP [Syrian Pounds].

The agricultural co-operatives have been successful in Jazira, the price of potatoes, onions, tomatoes and cucumbers have dropped, and are sometimes sold at symbolic prices. Last summer the price for a kilo of potatoes was 225 SYP, then it dropped to 45 SYP. The price of onions was 70 SYP per kilo, then they dropped to 29 SYP.

Livestock co-operatives are specialised in breeding cattle, and they produce dairy products. There are 6,796 participants in total, and the price for a share varies between 50 to 100 thousand SYP.

There are many women working in dairy factories, and they make yogurt, milk and cheese. A dairy factory produces a ton of yogurt, in 470 containers, distributed in markets in Derik [Dêrik / Al-Malikiyah]. 200 kilos of milk are sold every day for Shilêr women’s cooperative, and the market price for them is 225 SYP a container, instead of 250 SYP.

Commercial co-operatives include consumer co-operatives, buildings, building materials and food products. They have 11,574 participants, and the price for a share ranges between 10 to 20 thousand SYP.

Since the beginning of the Syrian crisis, many traders have been monopolising like mad, and fluctuating the prices. The price of cement, for example, reached more than 4,000 SYP. The co-operative societies have imported cement from Bashur [South Kurdistan / North Iraq] and started selling it cheaply. A bag of cement is now sold for 2,100 SYP. Sugar prices have gone up to 14,100 SYP a bag.

Industrial co-operatives include factories that manufacture tahini and halva, water bottling factories in Derbesiye‎ [Dirbêsiyê / Al-Darbasiyah], sewing workshops in Sheddadi [Şeddadê / Shaddadi / Shaddadah], ovens, electricity generators, fruit drying factories and handmade food. There are more than a thousand participants, and the price for a share ranges between 25 to 300 thousand SYP.

Participants benefit from these co-operatives, they receive monthly wages that vary from 50,000 to 60,000 SYP.

These co-operatives have a very positive impact on stabilising market prices, and especially the food product co-operatives, because they are not only based on profit, but aim to prevent monopoly and the raising of prices, too.