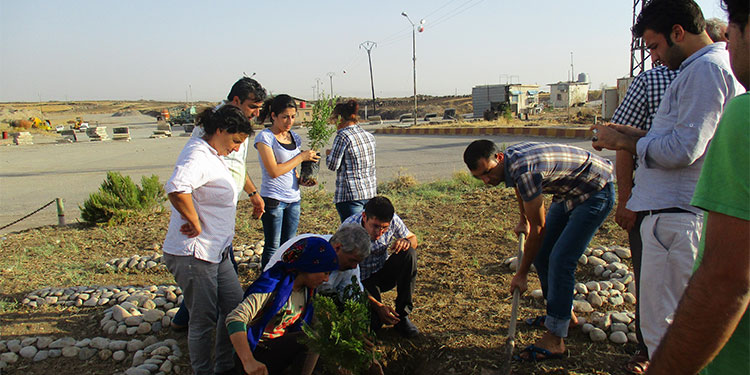 Post-revolutionary work is being undertaken to develop a system of social economy against the pre-revolutionary economic embargo of the Baath regime. One of the most active institutions in the economic struggle in Rojava is the Academy of Social Economy founded in the Jazira Canton [Kantona Cizîrê‎ / Cezîre] in 2014 by the TEV-DEM Economic Committee. The Academy was founded out of urgent necessity and has so far carried out eight basic education courses.

Books are taken as reference

Dilşa Efrîn, a member of the TEV-DEM Economic Committee, says that they made the decision to create an economic assembly before beginning economic activities, and says that, “The economy had been seen as money and profit. A statist mentality was felt intensely in economic activities. The economy was considered only a means to make money. In particular, there was a lack of confidence in the self and on the land in the countryside. We felt the need for an economy that could improve the social economy and to break this mentality”. Efrîn explains that following the foundation of the academy, they took the books of PKK leader Abdullah Öcalan as a reference for their economic system. Mentioning that there are some members who have specialised knowledge and practical experience in production, Efrîn says that they give theoretical education on the economy with their support.

Efrîn says that the Academy of Social Economy has begun to provide courses in specific areas, and that these began with agriculture, and continue with trade and cooperatives. She explains that educational work is not limited to the academy, adding, “There is resistance from a people in the mouth of the wolf. This is clear in the heroism of the YPG and YPJ. We witness and experience this in the economic domain on a daily basis. This is why we are making efforts to make our people’s resistance more conscious and conclusive”.

On the other hand, the Derbesiye‎ Popular Municipality, Economic Assembly, commune and Women’s Economic Committee have prepared three projects to offset the embargoes against Rojava and develop the social economy. The cooperative that is envisaged is made up stores, bakeries, and workplaces where insecticides are sold. The Dirbêsiyê Popular Municipality and the Economic Assembly announced that registration was open for the cooperative project last August. 116 people have registered so far, and registration is still underway.