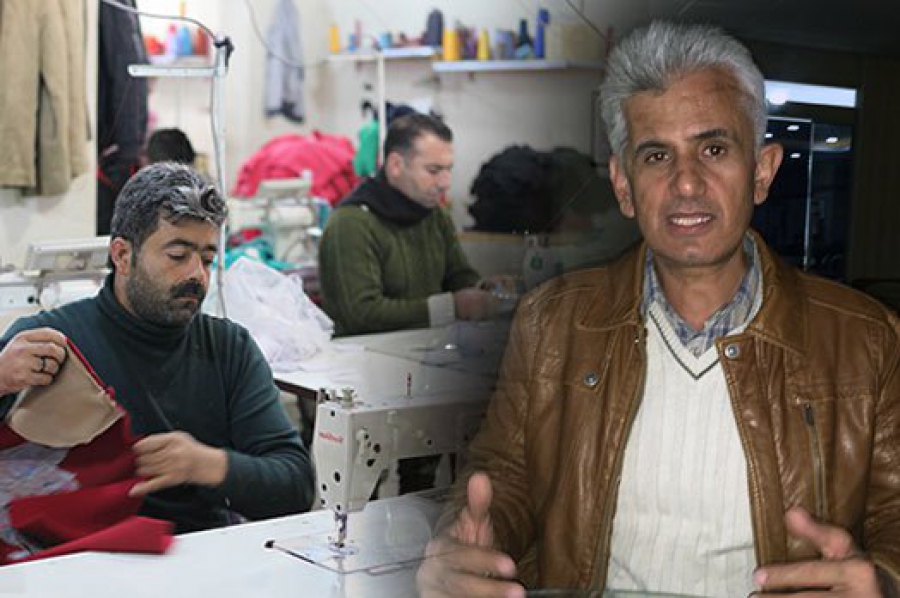 The revolution in Rojava (West Kurdistan/ North Syria), which started in Kobanî (Ain al-Arab) and spread like wildfire through Afrîn, Dêrik (Al-Malikiya), Qamişlo (Al-Qamishli), Amûdê and Serê Kaniyê (Ras al-Ayn) – the regions lying on the Turkish-Syrian border – has launched an alternative development in all aspects of society.

Inspired by the model of democratic confederalism and democratic autonomy, democratic assemblies, women’s council and other democratic organisations have been established. Every ethnic and religious group must be represented in these councils, and the leadership of each evenly divided between the sexes. This is not a project striving towards a nation state, but for democratic autonomy in the region and a democratic Syria.

The grassroots model of democratic confederalism stands in the tradition of Murray Bookchin’s communist anarchism, developed by Abdullah Ocalan, the current leader of the Kurdistan Workers Party (PKK) into a practically oriented system with women’s liberation as its central paradigm. Kurdistan’s multicultural structure is seen as a particularly important basis for the creation of a participatory economy in the form of community cooperatives in agriculture, water supply and the energy sector.

“Democratic confederalism often meets with opposition from other groups and factions. It is flexible, multicultural, against monopolies and oriented towards consensus. Ecology and feminism are its central pillars. This kind of self-government requires an alternative economic system, one in which the resources of the community are improved rather than exploited, and which meets the manifold needs of society.”[1]

Previous attempts to practice such democratic confederalism in the region of North Kurdistan (Turkey) have been extremely difficult. For a long time, there have been efforts to build a grassroots society. These structures, however, have always been under the shadow of arrests and permanent repression by the Turkish state. Because of this, thousands of civilians have been imprisoned, meaning that the structures constantly need to be renewed. This is especially salient for the building of an alternative economy, which has taken on particular importance in recent years.

While in North Kurdistan the established communes and cooperatives operate under mass repression, in the liberated territory of Rojava there are efforts to create a new form of economy independent of both capitalist and feudal relations of exploitation. This is being undertaken against the background of the drama of the Syrian war: thousands have been murdered and half of the population is homeless. Around two million people have emigrated from their homeland. The Syrian economy in particular has been severely affected by the war. Studies show that $150m would be needed in order for Syria to achieve its levels of fifteen years ago.

The Kurdish movement in Rojava developed a so-called “third way” politics, related neither to the regime nor the Islamist-dominated rebel front, but instead advocating democratic change in Syria. For this reason the region was initially spared from the conflict and for the most part remains so, and the majority of infrastructure is still intact.

Rojava’s regions are generally rich and could be self-sufficient. The soils in particular are extremely fertile. Nevertheless, due to an anti-Kurdish policy of underdevelopment, there is still poverty in Rojava, while those loyal to the regime grew rich. The past goal was not to develop the region, but to hammer some profit out of its underdevelopment. For this reason, many Kurds migrated to places like Heleb (Aleppo) and Damaskus (Şam). The Syrian regime’s emergency laws and the systematic, targeted underdevelopment of the region did the rest, helped along by poverty and increasing migration. This went along with an strengthened politics of Arabisation and assimilation.

A policy of embargo against the achievements of Rojava

Since 2011 the situation in Rojava has been hit by the embargo carried out by Turkey and the Kurdish Regional Government in South Kurdistan, and by the Islamists who oppose the autonomous government enacted in Rojava. The main effect has been an increase in the price of fuel and basic foods. The price hike in fuel, with a sub-zero winter and snowfall, is leading to an extremely dangerous situation, especially for children. This situation is making the onset of winter life-threatening for many families. It is the first time in 22 years that there has been heavy snowfall in Serê Kaniyê.

In the context of the embargo and the Syrian politics of looting from Rojava, the region remains economically weak, even though it has a stable base.

Dr Dara Kurdaxi is an economist and a member of the committee for economic revival and development in Afrîn. She spoke with the news agency ANF about Rojava’s economy:[2]

“We need new models for organisations and institutions. Those which are called collective, communal economic models, sometimes referred to as social economies. This is the method we are using as a foundation, so that the economy in Rojava can pick up and develop. The method in Rojava is not so much against private property, but rather has the goal of putting private property in the service of all the peoples who live in Rojava, for them to use. Naturally we’re only at the beginning. But nonetheless, even if only in small ways, we’re seeing some positive developments. We must be clear that we don’t need an economic revival and development which has no clear goal for the community […] It shouldn’t be a capitalist system, one without respect for the environment; nor should it be a system which continues class contradictions and in the end only serves capital. It should be a participatory model, based on natural resources and a strong infrastructure.

The democracy of a society must always be measured against the democratisation of its economy. For this end, the project in Rojava is an outstanding example. Some development can already be witnessed in Rojava. For instance, the oil industry is under the control of the councils and managed by the workers’ committee. The refineries produce cheap benzine for the cooperatives and the staff of the autonomous government. A great deal of land which was previously nationalised under Assad as part of the anti-Kurdish policies is now managed by free Rojava through agricultural cooperatives. Doctors’ committees are working to form a free health system. No doubt, as Dr Kurdaxi pointed out, many of these developments are in their infancy. Nonetheless, what has already been achieved is a historic step in what is perceived as an alternative to the logic of capitalism.

Dr Kurdaxi explains that the economic model of Rojava is an answer to the neoliberalism of capitalist modernity and a critique of the state capitalism which characterises real existing socialism. The model of Rojava should be a model for the whole Middle East. In order to support this new form of economy and bring it into general consciousness, economic conferences need to be held. These are intended to form an economy based on human worth, and for people to understand the meaning of the social economy. At a conference to be organised very soon, the failures of the existing models will be discussed and corrected.

“We have acquired a model which in the end will be grasped by the whole world, it has to be. We will sooner or later be successful in this, because it means the success of the community.”

Though only just beginning, this economic model has, with great determination and in spite of the war, been realised in praxis by many in Rojava. It stands in particularly clear contrast to the economic development of South Kurdistan (KRG), which is dependent on Europe and the USA. For South Kurdistan, where the social contradictions between the system of the client state (i.e. the ruling party of the PDK (Democratic Party of Kurdistan) and the socially disadvantaged are becoming ever shaper, the economic development of Rojava represents a glimmer of hope. This emancipatory development may also be a decisive one. Though perceived by western states as the real opposition, international Jihadists – supported by the Turkish NATO-state – are being smuggled into Rojava in a bid to do the utmost to destroy its autonomy. In a similar way, this also points towards the embargo.

“A people’s economy should thus be based on redistribution and oriented towards needs, rather than on being oriented exclusively towards accumulation and the theft of surplus value and surplus product. Local economic structures don’t only harm society, they harm nature. One of the main reasons for social decline is the effect of the local financial economy. The artificial creation of needs which ventures forth to find new markets, and the boundless desire for ever more gigantic profits makes the gap between rich and poor ever wider, and expands the camp of those who are living on poverty line, those who die of hunger. Such an economic policy is no longer acceptable to humanity. The greatest task of a socialist politics lies therefore with the implementation of an alternative economic policy, one based not on profit but on the fairer redistribution of wealth.”

The project of democratic confederalism and indeed the daily achievements fought for in Rojava are examples that another world, separate from capitalist exploitation, is possible. It is the task for all of us who stand up for solidarity, emancipation and freedom, to oppose the embargo on Rojava and Western support for Islamist terrorist groups who have massacred people in Rojava.