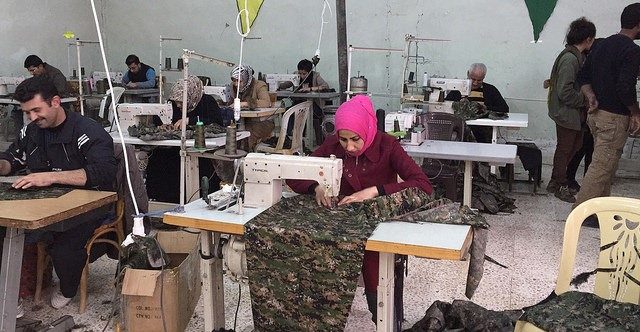 “The dream of the Middle Eastern uprisings, of the Syrian revolution, will perish if the Syrian people do not take up the cause of Democratic Autonomy and confederal revolution”

“Once we have purged the terrorists (from Afrin) we will then cleanse them from Manbij, Ayn al-Arab, Tal Abyad, Ra’s al-Ayn and Qamishli.” Turkish president Recep Tayyip Erdoğan

Despite being surrounded on all sides by enemies, with Afrin taken and the ‘new’ regime there coming to world attention for its normalisation of brutality and human rights abuses, the ‘Rojavan Revolution’ continues to move forward in an uncertain environment…

…rebuilding with great difficulty (including “repair to electricity, rehabilitation of schools and the treatment of water and sanitation…”)

…rebuilding with great difficulty what was so easily destroyed and working to change the face of this tormented region without gaining much attention.

A lot of these initiatives and hard work in relation to enhancing “democracy” could well be examined by our own so called developed western democracies where political participation is falling and the gap between the political apparatus and its operatives (politicians and bureaucrats) and the citizens is turning into a chasm.

Not so in the Democratic Federation of Northern Syria (Rojava) where the recent passing of legislation to enhance and protect the rights of women is one recent example of some of the necessary and radical steps taken to forge a new and vital society from the ruins of the old and where participation and equality are at the core of the process.

The Syrian Democratic Forces media center recently released details from the Legislative Council of Tabqa city who held a meeting in Tabqa Civil Council, attended by representatives of the Civil Administration and the Women’s Council, “in which the Women’s Law was approved.”

Tabqa (Al-Thawrah) is a city located in in the western countryside of the Raqqa Governorate of Syria, approximately 55 kilometres (34 miles) west of Raqqa city, on the banks of the Euphrates River and has been home to humans since ancient times.

Tabqa also centered largely in the SDF and Kurdish assault on ISIS / Daesh (supported by the United States military), known as the Battle of Tabqa (2017) – an operation, part of the Raqqa campaign (2016–2017), Operation Wrath of Euphrates, to recapture and secure Tabqa Dam, al-Thawrah city (Tabqa), Tabqa Airbase, and the surrounding countryside from ISIS… The attack began on 22 March 2017, and control of Tabqa and the Tabqa Dam had been achieved by 10 May 2017.

With ISIS/Daesh now largely routed, at least in this region, and despite Turkey’s endless threats against the predominantly Kurdish territory,  the work of now creating a vibrant democracy where once was only oppression, could well be a lesson for its belligerent neighbours, Turkey and Iran, to learn from and for the world to stand up and take notice….

The Constitution of the Rojava Cantons

We, the people of the Democratic Autonomous Regions of Afrin, Jazira and Kobane, a confederation of Kurds, Arabs, Syrics, Arameans, Turkmen, Armenians and Chechens, freely and solemnly declare and establish this Charter.

In pursuit of freedom, justice, dignity and democracy and led by principles of equality and environmental sustainability, the Charter proclaims a new social contract, based upon mutual and peaceful coexistence and understanding between all strands of society. It protects fundamental human rights and liberties and reaffirms the peoples’ right to self-determination.

Under the Charter, we, the people of the Autonomous Regions, unite in the spirit of reconciliation, pluralism and democratic participation so that all may express themselves freely in public life. In building a society free from authoritarianism, militarism, centralism and the intervention of religious authority in public affairs, the Charter recognizes Syria’s territorial integrity and aspires to maintain domestic and international peace.

In establishing this Charter, we declare a political system and civil administration founded upon a social contract that reconciles the rich mosaic of Syria through a transitional phase from dictatorship, civil war and destruction, to a new democratic society where civic life and social justice are preserved.” (The Social Contract of the Rojava Cantons in Syria)

“Rojava has been lauded by leftists all around the world to be some kind of communal, confederal socialist utopia unparalleled by anything else existing around the world right now, so the question of how the economy in such a mystical place might be organised seems to be an important one, and it already has been the source of much controversy, both in and outside Rojava.”

“When the regime forces left town after town in Rojava beginning 19th of July 2012 the state companies were expropriated and the councils took over control of the agricultural land. The new administration was built around newly created communes that mostly consisted of a village and the surrounding hamlets. The communes distributed the land among its families according to need and ability to manage it, some pieces of land remained in the hands of the higher councils to become ground zero for the first co-operatives…”

As regards the situation of women in the ‘new society’

The SDF Media Centre has recently published a section of the new law that guarantees and enhances the role of women in Syrian society:

The new law has 26 sections

…including “the special legal penalty when violating any article.”

“The most important of which:

2 – Equality between men and women in all aspects of life.

6 – Violence and discrimination against women are prohibited and are considered punishable offences.

7 – To grant women and men equal rights with regard to the Nationality Law.

8 – It is forbidden to marry the girl before she reaches the age of eighteen.

9 – Women have the right to custody of their children up to the age of 15 years.

Put this into the context where over half a billion women in the Muslim world of the Middle East exist on the margins of society, their social status is low, discrimination is enforced equally by men, religion and oftentimes the law itself. In Saudi Arabia, for instance,  women need to dress more conservatively and need to obey their father, brother, or other male relatives. In Saudi Arabia there are also separate schools for boys and girls. In general across the region women’s rights are restricted including being forced to undergo female circumcision while the ‘philosophy’ and practice of honour killing, along with widespread violence against women, continues. And on and on…

Whereas under the new social contract in Rojava: Article 27 states:

Women have the inviolable right to participate in political, social, economic and cultural life.

Men and women are equal in the eyes of the law. The Charter guarantees the effective realisation of equality of women and mandates public institutions to work towards the elimination of gender discrimination.

….As Meredith Tax said: “Imagine what a liberated area with a secular, egalitarian approach to women, governance, economics, land usage, and ecological sustainability could mean for the Middle East. Kurdistan has borders in Iran, Iraq, Syria, and Turkey; if Rojava can survive, dissidents from the whole region will have a place they can run to escape forced marriages and get a secular education—for Rojava has started its own university, the Mesopotamian Academy of Social Sciences, which is now holding a book drive.”

Where to from here?

Another recent headline from the SDF Media Centre surely summed up the complex situation in Northern Syria, simply: Life will continue … despite the pain…

And while the statement was referring to: “the wounds left by the war in Raqqa city” and where:

“…despite the tragedies and various physical injuries as a result of mines and missiles that its people have suffered, remains hope, and remains the determination of the sons of Raqqa city to live…”

…it could well apply to the courageous work of those in Western Kurdistan struggling to build a society of participatory democracy from the ruins of invasion, “terror” and civil war, surrounded by enemies with a prehistoric view of how societies should be organised, as well as also keenly demonstrating unspeakable cruelty and brutality in their ability to maintain themselves…

…and likewise our own so called liberal democracies / “the international community”, playing their own cynical games that merely show the extent of their historical redundancy until “we” in the “West” have our own (or our next), genuine, revolutionary transformation in democratic structures that will bring in a more just and equal order as well as engage the mass of its citizens in taking part in the forward movement of all our societies into an uncertain future.

“In short, the Rojava revolution is fulfilling the dreams of Arab Spring—and then some. If its ideas can be sustained and can prevail against ISIS, Kurdish nationalism, and the hostile states surrounding the cantons, Rojava will affect the possibilities available to the whole region. So why isn’t it getting more international support?” (Meredith Tax)

Why is the Democratic Federation of Northern Syria not getting more international support?

In a discussion with the Kurdish Women’s Movement during her visit to Rojava, Meredith Tax (“we need to learn from them—and help”) was told what the ‘Rojavan Revolution’ needs to survive and grow:

All of which, and more, much more, apply as much today as in early 2015. And even more so with the now near ending of the Syrian civil war.

“Rojava is developing a progressive model for gender equality, religious and ethnic freedom, and participatory democracy unlike anything seen in the region. It has the potential to secure far greater social justice than the simplistic reforms suggested by some in the opposition – which I suspect is why, perversely, it has so few international allies in spite of massive popular support on the ground.” (Margaret Owen)

“The dream of the Middle Eastern uprisings, of the Syrian revolution, will perish if the Syrian people do not take up the cause of Democratic Autonomy and confederal revolution. The Federation at the same time must greatly improve its public outreach and make its ideals, its ideas, its hope known to the greater public in the Middle East. More honest and more critical media outlets are needed for that.” The Internationalist Commune of Rojava has said wisely…

Time those with a commitment to social change, to social transformation started taking notice of what “revolution” might mean, in this new era of the 21st century?

Revolution – ? – The philosophers have only interpreted the world, in various ways; – the Kurds are changing it…

“In Northern Syria ISIS has been driven back by people fighting for a society based on principles of direct democracy, gender equality, and sustainability. From their revolution in 2012 they have created a de facto autonomous region in which these ideas are being implemented. The region is known to Kurds as Rojava and these events are commonly referred to as the Rojavan revolution, reflecting the fact that the revolution was initiated and led by Kurdish forces, even though now they are building a much broader coalition known as the Syrian Democratic Force. The political system of Rojava is inspired by democratic confederalism and communalism. It is influenced by anarchist and libertarian principles, and is considered by many a type of libertarian socialism. The basic unit at the local level is the community which pools resources for education, protection and governance. At a national level communities are unrestricted in deciding their own economic decisions on who they wish to sell to and how resources are allocated. There is a broad push for social reform, gender equality and ecological stabilization in the region.” (Workers Solidarity Movement)