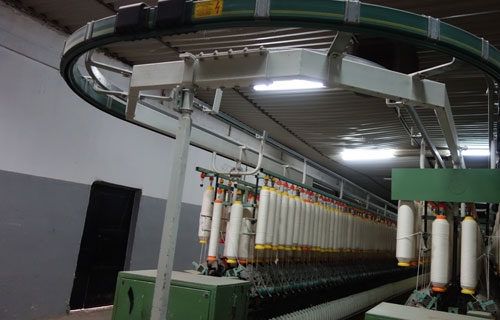 After the city Kobanê [Kobanî / Ayn al-Arab] was liberated from the Baath-regime on the 19th of July 2012, the Rojava Revolution has been much talked about. Since then, a lot of progress has been made in the areas of military and politics, and now the focus is on the economy. Despite the continuing war, work on an alternative, communal, socially sustainable economy is in full swing.

For a long time, Rojava was excluded from economic life in Syria. That is one reason why there were a lot of difficulties in the economic field in the first years after the revolution. But now, however, people are taking steps in the direction of an economy in the framework of democratic autonomy, with more self-esteem.

Because the war against Rojava is consciously being led on an economic level, people put as much importance on the economy as they do on the military front, preparing for the future with as much foresight and discipline. They are fully aware that they will only be able to safeguard their political gains if they can rely on solidly-functioning economic structures.

The way forward is littered with difficulties, but this does not only have to do with the war and the economic embargo against Rojava. People’s understanding of economy has been shaped by years of exploitative policies by the Baath regime. It was normal practice in Rojava to survive the entire year on the revenue of a few months’ agricultural work. That is why one of the biggest challenges is to overcome the inertia this has created and get people to understand that they have to build up an economy on their own land with their own hands. Things are advancing. In spite of war conditions, production either continues or is being organized anew. Countless cooperatives have come into being, from the Industrial to the Agriculturual sector.

On what basis is the economic system of Rojava being set up, what concrete steps were taken to advance in industry and the building sector, how does transport function and what are working conditions like? We examined these and other economic questions on our visit to Rojava, talking to many different people. Unfortunately, due to geographical factors, our research concentrated on the Cizîre and Kobanê cantons and we got little information about Afrîn, for which we apologize.

The economy of Rojava under the Baath regime

A big obstacle to economic development is the re-appropriation of what the state previously wrested from the people. It is worth taking a look at what damage the economic policies of the Baath-regime has caused in Rojava.

One big factor in the economic policies of the Baath regime vis-à-vis the Kurdish population was the creation of the so-called “Arab belt”. With the Arabization of the Kurdish areas, the regime did not only demographically and culturally alter the structures of the region. Kurds were not allowed to have ID cards, and therefore not allowed to buy land or property. The regime wanted to use Rojava as nothing but a wheat producer for the rest of Syria, and in order to put this into practice, any method was fair. Not only were monocultures created which destroyed fertile land, the state allowed nothing to be cultivated apart from wheat and barley, and actively cut down the plants and trees of the local population.

People who tried to resist could expect heavy punishments, including being deported elsewhere in the country. The goal of the state’s economic policies was to make the population entirely dependent on the central government. The population got nothing back from the proceeds of the exportation of wheat and petrol.

Given this background, it is not surprising that the regime did not build any factories or other kinds of industry in Rojava either. The processing of raw materials always took place in Syrian cities outside of Rojava. This way, the regime consciously pushed the population into poverty.

A communal, alternative type of economy

Now a multi-faceted, alternative type of economy is being born in response to the Baath regime’s policies. The participation of women in the fledgling economy is as much a defining trait as its communal and solidarity nature. The people of Rojava are developing the economic model in parallel to the political project of democratic autonomy. Instead of the exclusionary, exploitative old system, they are trying to put an economy into place which embraces all parts of the population and is geared towards the needs of society. This economic model, whose core elements are the cooperatives, will include all economic branches, from agriculture to industry, and will be applied across all of Rojava. So far, the need for cooperatives in the agricultural sector was the most pressing, so they were created first, but the number of cooperatives in construction, trade and other types of businesses are also increasing.

Committees, communes and councils form the foundation of economic autonomy

Economic Councils attached to the Executive Councils of the Rojava cantons were established, to oversee economic matters in each canton. These Economic Councils have a double presidency (one woman and one man) and are organized on the basis of communes and committees, according to the principles of democratic autonomy. In order to guarantee economic cooperation between the cantons, a General Economic Council was founded. Yet, the most important work is done in the cantons. The Economic Councils gather weekly in order to speak about the general economic challenges, and to find solutions for economic problems – for example, resulting from the embargo. On top of this, rotating delegates of the Economic Councils meet once a week with the representatives of the Executive Councils and delegates of the Energy Council to discuss and decide things together. As in every other area of society, women also organize separately and autonomously, creating their own structures in parallel to the mixed structures.

An important pillar for the creation of an alternative economy is education. Education is essential in changing mentalities.  An Economy Academy has been founded, where both practical and ideological lessons are being taught. During the first stages, education is given to students across sectors, while later lessons are specialized for professional groups, such as engineers, technicians, farmers and others. Through this educational work, theoretical and practical bases for a communal economy are being laid.

In spite of all efforts, a “consumer society” mentality still exists. Some parts of society still have reservations about the new economic model. It is through the practical results that the work so far has brought, as well as through education, that trust and the will to participate will be created.

The second institution next to the economic academies are the Centres for Economic Development (Kurdish: Navenda Geşkirina Abori). These centres exist in ten cities in Rojava and serve as a contact point for ordinary citizens on economic matters. At the same time, they work with the task of building up new cooperatives and supporting them, so as to help the economy expand to new areas. Setting up functioning structures for oil production and fuel distribution, ensuring electricity supply and supporting farmers are among the first tasks of the economic centres.

The communal power of the people: Hevgirtin

“Hevgirtin”, which means “coming together” in English, is the biggest cooperative in Rojava at the moment. It is primarily a trade cooperative and already has over 10,000 members, two properties which give Hevgirtin a central position. In the future, it hopes to play a unifying, direction-giving role for other cooperatives, as well as to help in creating a financial system.

At the moment, Hevgirtin is mostly present in Cizîrê [Jazira / Jazeera Canton], but it is starting to expand its activities to Kobanê as well. The success story of this cooperative is that it has enabled large parts of the population to have access to land, participate in trade and earn a living. Their aim is also to prevent the formation of monopolies or black markets, as well as to implement pricing controls.

One of the things Hevgirtin does is to open warehouses. Having warehouses means it will be able to stay in control of the amount of goods sent to the markets, which will allow it to control inflation.

Hevgirtin organizes markets in different cities, thereby bringing affordable, good quality products to the population. Tel Temir, Serêkaniyê, Dirbêsiyê, Tirbêspî and Dêrik already have these markets; new ones will be opened in other cities soon. The markets are equally organized in the form of cooperatives and are run by the people. One market will be opened in Hesekê soon. The cooperative will be made up of 23 members, while three women and two men will be on its committee. Xelil Enter, one of the members of the committee, is convinced that opening the market will bring positive developments to Hesekê: not only will there be a lot of new employment possibilities, but it will be good for keeping prices in check. At one point the price of sugar had risen to 1,000 Syrian Lira. Then Hevgirtin intervened and brought sugar onto the market for 300 Syrian Lira. It worked because they are so big. “With measures like this, we can prevent certain circles from taking advantage of the war situation and enriching themselves on the backs of ordinary people”, Enter explained. At the same time, it is hoped that by opening new markets the competition will provide incentives for others to produce better quality products – which in the end will benefit everyone.

So far, hundreds of agricultural cooperatives are part of Hevgirtin, on top of which there are also tailor’s shops, milk and cattle cooperatives, gas stations and factories. It is possible to become a member of one of these cooperatives for a small contribution of 10 to 15 thousand Lira (20 to 30 Euros). Afterwards, the revenue is shared fairly between everyone.

Hevgirtin’s next step is to open factories and smaller workshops, which will be transferred to members of the general population in the form of cooperatives. For this, they are also approaching people who were working in factories and workshops that closed because of the war. They also plan to set up gas stations, clothes shops, restaurants and construction firms in the form of cooperatives.