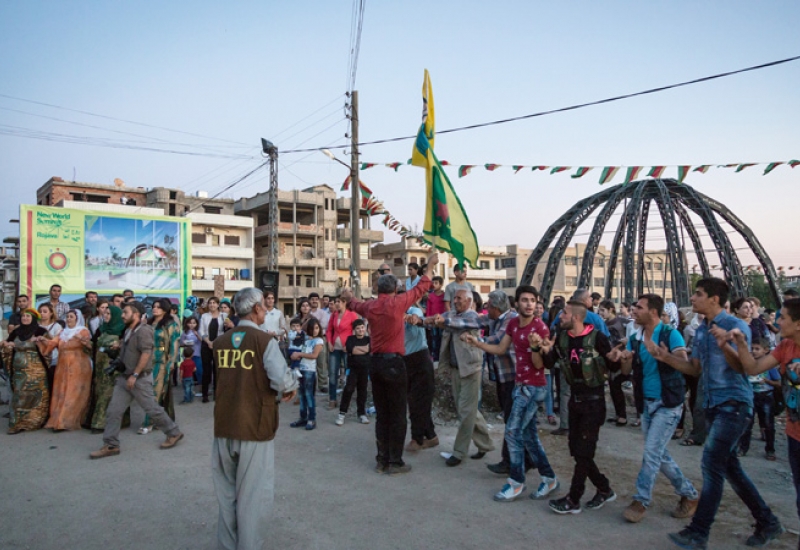 When street demonstrations gave way to the creation of armed groups in 2011 Syria, the Damascene government intervened with harsh military repression, whereas the United States, Turkey, Qatar and Saudi Arabia sent towards the opposition a steady flow of money and weapons, hoping in Assad’s powers rapid collapse. Chaos in the whole country ensued, and Jabat-Al-Nusra (Al-Qaeda in Syria) tried to occupy some towns in the north, such as Serekaniye, bordering with Turkey. So, People’s Protection Units (YPG) were formed amongst most of the Kurdish population of the area, which succeeded in expelling the Salafists after bloody clashes.

The YPG’s weapons then turned against the Syrian soldiers. It was July 2012. “That was a revolution, a real revolution”, says Nuvin, a 24-year-old girl from Hasakah. The sweetened version, according to which the Syrian government “delivered” Rojava peacefully to the Kurds so that they could take care of the Islamists in the West and in the South of the country, doesn’t corroborate with what the people who lived the events say: “there was bloody fighting, and eventually the government had to retreat.”.

Why were the Kurds hostile towards Assad? Decades of discrimination and political persecution by the Baathists, as well as the Arab colonisation of Kurdish territories, all played a part. Even today, a great number of inhabitants of Rojava, although born in Syria, haven’t got a passport nor Syrian citizenship, the only reason being born Kurds. Second-rate citizens, just like the Palestinians in Israel, so dear -for fictitious reasons, it seems- to the Syrian government. “It was forbidden to speak Kurdish” says 18-year old Raperin, and in the schools one could learn only Arabic language, history and culture. Our colonisation wasn’t only territorial, it went deeper than that”. Then, in 2003, the United States invaded Iraq and in 2004 Iraqi Kurdistan was one step away from autonomy. In those months an Arab football team was playing in the Qamishlo stadium in Rojava, during tournament the away supporters started chanting support for Saddam Hussein and against the Kurds. “The fights that followed left dozens of people dead, especially because the Syrian police intervened exclusively against the Kurds,” remembers Shiar, from Amude.

When the YPG turned their weapons against those very same uniforms, in the chaos of 2012, they remembered well those events. When the territory was freed almost totally of government troops, the Democratic Union Party (PYD) -inspired by the ideas of Abdullah Ocalan- took it upon itself to promote a meeting of the main political, social and religious organisations, be it Kurdish, Arab, Assyrian, Armenian or Yazidi, which reached an agreement for setting up an executive committee for every canton in Rojava that would act in lieu of the territorial government. The influence of the PYD made sure that male and female led every committee, so that both genders were represented for every office, at the ratio of 50% each. Concurrently the PYD involved other organisations in establishing the Tev-Dem (Movement for a Democratic Society) that would operate within society to support the population in the creation of economic, political, social and military self-government.

The groups that established the executive committee in 2011 created in 2014 the legislative committee, in which about fifty organisations elect respectively one man and one woman as representatives. The structure of the revolution in Rojava is at the same time dissimilar and analogous to the communist revolutions of Eastern Europe. In those countries, in general terms, the party functioned as the revolutionary engine (or conservative engine, according to the phases and points of view), and the governments (in turn substantially a one-party affair) carried out the ordinary executive function, in a relationship conceived as dialectic between stability and change. In the system suggested by Ocalan in his writings from prison, which the PYD practiced in Rojava, this dialectic is kept, but the relationship between executive/legislative institutions and revolutionary movement is different inasmuch as the party limits itself (intentionally) to an organisational function and to a reproduction of political objectivity, leaving to a plethora of societal voices the concrete shaping up of transformation, and not relinquishing its supreme penchant for extinction within the movement itself.

The PYD’s cadres are present in the Tev-Dem and elsewhere, although their objective might seem more to reproduce an active social subjectivity, which is to “entrust” revolutionary duty to the self-reliant social grassroots, than to simply occupy the key places as a “separate” organisation. Not coincidentally, it is difficult to find “PYD advocates” in Rojava’s institutions, although it often happens that some people might simply (and rather mysteriously) be pointed out as the revolution’s “cadres”. This way of acting seems to be dictated by a calm but determined awareness of the historical lesson offered by the political failures of socialism past. “Their job is to organise something, so that that something may walk with its own legs”, explains a European comrade in Qamishlo. “They go to the Jarablus area, where the Islamic State still dominates, and help converge all the dissenting social forces in an “underground” gathering, which will constitute the core of future institutions when military relationships in the area will change”. It’s what Kurdish parties similar to the PYD -PKK and PJAK- are doing in Turkey and Iran, where the DTK (Democratic Society Congress) and KODAR (Free and Democratic Society of Rojhelat-Iranian Kurdistan) respectively are movements analogous to the Syrian Tev-Dem. These are spheres where organisational, political and productive experience can flourish, alongside all the social components which expected to operate in an autonomous way in different states.

However, are Rojavan institutions a state or do they foreshadow a state? In Amude, the provisional administrative capital of Cizire canton, the town court doesn’t appear that much different from any other court: in the next room, the general attorney (who answers to an executive committee) is questioning a man with his female colleague, and there’s a prison in the courtyard (“a five-star prison, I assure you, where we serve excellent meals”, says one of the judges lurking in the building). The judges don’t don any gown, and there’s a kind and down-to earth look about them, but appearances count for nothing when one is dealing with laws and punishment. Sharine, the judge who’s been working as such for the longest time, explains that the judges’ board is elected by a people’s council of 180 strong town-dwellers. When the board deems it not possible to pass a verdict after the first session, the citizens’ council and the communes of the area supply a jury of fifteen members. If the case is particularly serious the guilty verdict is passed by one hundred members chosen amongst the populace in the same way, then the attorney sets the punishment.

The juridic body, explains Sharine, remains partly the traditional one, which in Muslim societies never ceased to exert its authority through notables, scholars of Fikih (Koranic law) and sheikhs (prominent local characters), partly the one dictated by the Rojava legislative committee’s recent work, partly the one established by the Syrian state throughout the years: necessarily, on a juridic matter the revolution proceeds through decrees and reforms, and modifies via specific interventions the juridic inheritance of the region. What Rojava’s judges care to clarify, however, are two things: firstly, in the new system the tradition is respected (above all for reasons of popular consensus) but also challenged. For example both polygamy and child marriage are forbidden, and if honour killing before the revolution was considered a sort of self-defence, now adultery from both sexes is punished with six months’ detention (mind you they have replaced the death penalty), but honour killing elicits a minimum of five years’ prison, and a woman who kills her aggressor is not considered guilty. Moreover, for each judicial case involving a woman, all the female inhabitants in the area’s commune where the woman concerned lives, write the judge a letter expressing a point of view from a completely female perspective about the case discussed.

Secondly -and it’s a point on which everyone here, as in Bakur (Turkish Kurdistan), insists- the fundamental difference with the Western judicial systems is that on average only a third of the social disputes reach a court. All the others are solved by the communes -area assemblies- through agreements between the parties and light punishments. An auxiliary system according to which the courts don’t work full-time for all cases exists, as in the European codes, according to the idea (moreover disregarded) that every event has to be catalogued according to a code, or according to general and neutral criteria: the wish of the revolutionary society, at least in Rojava, is that there shouldn’t be the need to resort neither to a judge nor to a people’s jury, nor to muster hundreds of people in order to evaluate if a person is guilty, and ask the attorney for how long the person will have to stay in prison. In the communes, they explain in court, people know one another closely, are trustworthy and know the personalities and the background and -young female judge Kaukeb assures- find a solution in the vast majority of cases.

What seems pivotal to understand, in hindsight, is that a look at the institutions resembling the liberal Tocquevillian model or the socialist one, reveals only a minimal part of Rojava’s political and institutional life: the communes, which we mentioned only at the end in reality occupy the top of the system: they promote advice and solutions that have, for the town and the canton boards, a value that is far superior to that of a simple suggestion. Ghalia, from the Amude People’s House, explains that a single communard can obtain the dismissal of any official, even one at the very top. As well as solving disputes with “solution committees” elected in the People’s Houses, the communes start economic activities on a cooperative basis, select volunteers for the areas’ defence (the HPC, “forces of social defence”), propose laws for the canton in the legislative board. Is this the way to stamp out the state, we ask Ghalia? “The communes are thought out “against” the boards at the top: they limit their power and exert in turn a power from below, which is predominant compared to the one coming from above. This is the difference from the state system.”.

The Kurdish movement challenges the state at a conceptual level before the historical: the notion of the state appears here in relation to a way of organising the institutions rather than to the very existence of the institutions; it’s above all a way of thinking of its function. (The movement of Rojava proposes a vision that neither should be uncritically accepted nor arrogantly dismissed but considered useful for all those articulating a critique of the state in order to ask themselves what, at a closer look and in the final analysis, the state is).The communes and the People’s Houses, for instance, also have an important bureaucratic function: some girls pass by in order to apply for permission to leave Rojava (because one needs permission…), although it will have to be counter-stamped by the citizens’ board and the canton’s board; and another boy asks for exemption from military service, recently introduced by the legislative board, because of studying, and he’ll have to follow a similar path.

Doesn’t this bureaucratic function amply recall, once more, the workings of a state? A comrade present at the People’s House provides an answer of a different kind: “Here people have practical problems to solve and to think about, life in poverty and war, and they don’t give a fig for matters regarding ‘goat’s wool’: they want the social and everyday problems solved”. Ghalia, from behind the flower-patterned veil that covers her head, and with her glance of an old, understanding mother, calmly adds: “Our mentality is different from the mentality of the state: this is important. We help one another, we don’t want to overpower one another. The state is above all is a logic, and here this logic doesn’t exist.”.